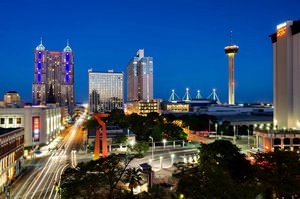 Fortress is the main historical symbol of the city and the most important landmark of Texas. The history of this outstanding structure is very unusual. It is the former Mission San Antonio de Valero

. The construction of the Catholic mission started in 1744, shortly after the foundation of the new city by Spanish settlers. A noteworthy fact - the mission was not completed. At the end of the 18th century, it became fully desolated. In the early 19th century, the building was converted into the barracks for the Mexican soldiers. The fortress was used as barracks until 1835. It is believed that it were Mexican soldiers who gave the building a new name. For a long time, the building served various military purposes, but it was seriously damaged during hostilities. The rebuilding works started in 1912. Today, the partially restored mission is the main symbol of Texas independence.
Top hotels in San Antonio for business trip or short vacation
It’s not an easy task to define the best hotels among the hundreds in San Antonio. However, some of them are particularly popular with tourists. Travelers, who want to enjoy a luxury …

is another prominent attraction of the city. It stretches along the San Antonio River and remains the most popular tourist district. The coastline is almost completely given to pedestrians. Many popular hotels, restaurants, trendy boutiques, and nightclubs are open in this part of the city. As a rule, travelers enjoy making a stroll on the promenade in the evening, when original artistic lighting illuminates the waterfront. It is also worth noting that there are several important cultural centers close to the coastline, including the La Villita

. The construction of the waterfront began in 1939. Nowadays, its length is almost 5 kilometers.
The Museum of Modern Art or McNay Art Museum

is one of the most unusual cultural centers of the city. It is the first cultural institution of this kind in the state of Texas. The Museum regularly holds interesting exhibitions devoted to works of local artists. Travelers keen on ancient architecture should take a walk through the picturesque district of King William

. This part of the city features a number of spectacular buildings in Victorian style. Wealthy immigrants from Spain built their elegant mansions in the district. Spanish Governor's Palace is one of the most fabulous and spectacular buildings in the area. Copyright www.orangesmile.com
Top touristic routes around San Antonio: architectural sightseeing and landmarks
Discovering the architecture of San Antonio from bird's eye view! Alamo Mission, McNay Art Museum, Marriott Rivercenter Hotel, all those monuments are defining the image of San Antonio …

Open
San Antonio is not deprived of unique modern monuments, and one of these landmarks is located in the territory of the scenic Hemisphere Park. It is the Tower of the Americas

, height of which is 229 meters. The tower has two great observation decks that vacationers will find interesting to visit, as well as an attractive restaurant with a panoramic view. In the immediate vicinity of the main historical monument of the city, tourists will find another landmark - San Antonio Missions National Historical Park

. It’s the place where visitors can see four Catholic missions. These are the only religious missions that have managed to survive and retain their original meaning over the years of long battles. 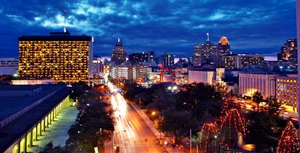 The Buckhorn Saloon and Museum

is another unusual cultural institution. This restaurant-museum truly looks like an original museum, which exhibition is devoted to the Wild West. Finally, San Fernando Cathedral

should be mentioned as one of the main religious attractions in the city. It is also one of the oldest buildings in San Antonio.

In the section below, you can get one of our excursion, activities or city discovery tours over San Antonio and surroundings. Our website offers 10-30% lower ticket prices, when compared to the offline purchase on the spot.

This guide to cultural sights San Antonio is protected by the copyright law. You can re-publish this content with mandatory attribution: direct and active hyperlink to www.orangesmile.com.
San Antonio - guide chapters 1 2 3 4 5 6

What to visit during two-day excursion in San Antonio

Public palaces near San Antonio
♥   Palace 'Casa Salazar' , 0.4 km from the center. On the map

Art galleries in San Antonio and around
♥   Art museum 'Briscoe Western Art Museum' San Antonio, 0.4 km from the center. On the map

♥   Art museum 'San Antonio Museum of Art' San Antonio, 1.8 km from the center. On the map

Cathedrals and basilicas near San Antonio
♥   Basilica of the National Shrine of the Little Flower, San Antonio, 4 km from the center. On the map

♥   Mission San Juan Capistrano, San Antonio, 10.8 km from the center. On the map 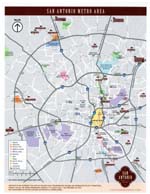 Excursions over cultural sights of neighbours of San Antonio

Austin
A unique cultural center is the University of Texas at Austin, which keeps 7 museums of various profiles and 17 libraries under one roof. It is here that you can find the Blanton Museum of Art that has gathered a collection of over 17,000 works. You will have a chance to see paintings by famous American, Latin American, and European artists. For the convenience of visitors, ... Open »
Houston
After admiring works of contemporary architects, city visitors should definitely walk around the theater district. Houston Grand Opera is considered the most important object of the area; this world- famous opera house surprises not only with the variety of cultural events, but also with its fascinating exterior. It also houses Houston Symphony that is one of the country's ... Open »
Texas
Among its architectural monuments there are unique objects, including Newby-McMahon Building. The funniest landmark of the state in located in Wichita Falls; the height of this ‘skyscraper’ is 12 meters only. It was built by engineer John D. McMahon, a talented architect that has managed to implement a brilliant scam. In the early 20th century, deposits of oil were found ... Open »
Dallas
Park City is considered the favorite vacation spot of both locals and visitors. One of the main shopping streets starts right behind the park. Move north from the central area of Dallas, and you will reach the so-called "Arts District". The name of the quarter has appeared thanks to a huge choice of various cultural institutions and museums located here. Here you will find ... Open »
Monterrey
Since its unveiling the pharos is still the highest object in the city attracting hundreds of curious tourists to admire the beauty of the monument. Zona Rosa is the next tourist destination attracting travelers. This is the luxury city borough where the rich and luxury mansions, hotels and upscale restaurants and boutiques are placed. Many travelers visit this borough to see ... Open »
Oklahoma City
A significant must visit spot of tourist interest and admiration is the Kirkpatrick Center. This is a scale cultural center which hosts several museums. Those tourists craving to get a deeper insight into the history of the city and state of Oklahoma should visit the Oklahoma History Center. Its vast collection of artifacts tells the visitors about the most significant events ... Open »

Culture guide to San Antonio. Which fascinating sights to visit once you are in San Antonio: temples, churches, museums, theaters and castles. Recommendations (with addresses, phone numbers and links) on the places 'must visit' in San Antonio. Plan your own city excursion by using this page info!