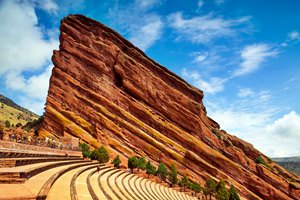 The Colorado State Capitol building is quite remarkable from an architectural point of view. It draws everyone's attention from the very first minutes, as it rises above the city as if its defender. The building's construction was completed in 1901, neoclassicism was chosen as the style. The government institution's interior is no less noteworthy. Near the Capitol is the Civic Center Park where one can have a great time walking or sitting on a bench, enjoying the extraordinary peace. Here you can see the Voorhies Memorial, which pays tribute to all victims of the Second World War.
Denver design-hotels for stylish travellers
In the very center of Denver, there is a comfortable hotel, Magnolia Hotel Denver, which has a very attractive and harmonious design. Its spacious rooms bear a simple decoration and feature …

Open
On the opposite side of the Colorado State Capitol building is the Molly Brown House Museum. A woman who owned the house became famous mostly for being one of the Titanic survivors. It has preserved the situation in which this socialite and philanthropist lived, so you can easily plunge into the atmosphere of that time. Perhaps one day wouldn't be enough for exploring the huge Fairmount Cemetery. Its territory accommodates many interesting monuments, crypts, and gravestones, mostly politicians and officials are buried here.
Denver is a university town, which is confirmed by two prestigious universities based here. First of all, this is the University of Denver whose building resembles typical European educational institutions. It was founded in 1864, and its interior and exterior still keep the history of that time. Another prestigious educational institution is Regis University founded in 1877 at the initiative of the Society of Jesus, and, as you might understand, it has a Catholic and Jesuit focus. It is very well maintained, due to which a walk around the University feels like a real tour. Copyright www.orangesmile.com
Top places to stay in Denver - most luxurious hotels
The most luxurious accommodation option in Denver is the Four Seasons Hotel Denver. This fashionable hotel located near Larimer Square occupies an elite high-rise building with panoramic …

Open
The city's main religious monument is the Cathedral of the Immaculate Conception. The beautiful Gothic church designed and built by Leon Coquard in 1911 is famous for its wonderful stained glass windows. On the territory of the Latin cross-shaped building, one can discover a statue of John Paul II who visited the cathedral in 1993. St. John's Cathedral is another Denver's sacred landmark striking with its amazingly beautiful stained glass windows. The neo-Gothic building was erected in 1905. Those who prefer small, cozy churches will appreciate the peace reigning in St. Patrick's Mission Church. Here is a Hindu temple in the city, and its name is Orgyen Khamdroling Dharma Center. It is truly impressive with its colorfulness.

In the section below, you can get one of our excursion, activities or city discovery tours over Denver and surroundings. Our website offers 10-30% lower ticket prices, when compared to the offline purchase on the spot.

City tours, excursions and tickets in Denver and surroundings

This guide to cultural sights Denver is protected by the copyright law. You can re-publish this content with mandatory attribution: direct and active hyperlink to www.orangesmile.com.
Denver - guide chapters 1 2 3 4 5 6 7 8 9
Reference information
Map of all art museums

Art galleries in Denver and around
♥   Art museum 'Denver Art Museum' Denver, 0.5 km from the center. On the map

♥   Art museum 'Clyfford Still Museum' Denver, 0.6 km from the center. On the map

♥   Art museum 'Anschutz collection' Denver, 0.7 km from the center. On the map

Unique spots in Denver and near 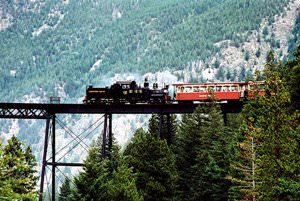 Distance from Denver center - 63.5 km.
Later, the railroad was decided to reconstruct and use for tourism, since it is a good alternative to the most extreme world’s attractions. In 1973 the destroyed parts of the road were restored, and a year later a sightseeing train began to carry passengers. Movement on the narrow-gauge road through the mountainous area is quite an unusual pastime in itself. The most frightening and dangerous section of the track is a bridge named Devil’s Gate. … Read further 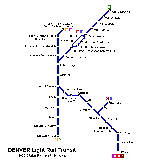 Photogallery of cultural heritage of Denver

Excursions over cultural sights of neighbours of Denver

Colorado
After admiring spectacular high-rise buildings, you can go to the nearby town of Morrison, where one of the world's most famous archaeological centers is situated. Scientists have discovered many unique artifacts there, including dinosaur fossils, which are now stored in the local museum. Busy Boulder campus also surprises guests with a large selection of attractions. In ... Open »
Santa Fe
The old part of the city also hosts numerous historical objects of tourist attraction. Its symbol has been for many centuries the Palace of the Governor. The construction of the building was finished in 1610. The majestic palace is among the oldest public buildings of the country. The Loretto Chapel is a remarkable architectural landmark of the city as well. Tourists will be ... Open »
Utah
Those who go for a trip in winter would find interesting to visit Bryce Canyon National Park. It is a large amphitheater of natural origin, which is particularly impressive in winter. Travelers who wish to learn more about the history and culture of the state have to visit Wellsville; it is located in the very beautiful mountainous area. There are greatest historical centers ... Open »
Salt Lake City
Among the architectural highlights of the later period the County Building points out. It is characterized by the impressive scale and incomparable style. Art lovers are recommended to visit the Utah Museum of Fine Arts; there are hundreds of priceless art paintings in its walls. Curious tourists and those who dwell on vacation with children would like the Utah Museum of ... Open »
Oklahoma City
Another remarkable spot in Oklahoma-City to visit is the Oklahoma State Capitol. This is the only Capitol in the country under which oil was located. Those tourists tending more to educating tours and events will love to visit the Science Museum Oklahoma which holds educating lectures for its visitors on the daily basis. All the tourists may take part in exciting scientific ... Open »
Arizona
Traveling through the territory of the southern state, it’s difficult to imagine that amazing cultural and historical sites are hiding among desert landscapes. The state has a huge number of natural attractions and cultural sites. The main symbol of the state is the Grand Canyon. However, travelers shouldn’t limit themselves with exploring this attraction only. National ... Open »

Culture guide to Denver. Which fascinating sights to visit once you are in Denver: temples, churches, museums, theaters and castles. Recommendations (with addresses, phone numbers and links) on the places 'must visit' in Denver. Plan your own city excursion by using this page info!