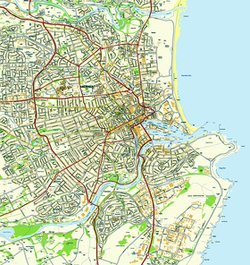 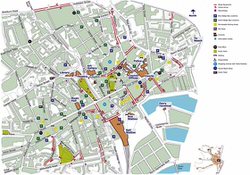 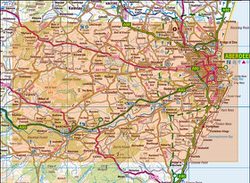 Interactive maps of hiking and biking routes around Aberdeen

1. You can zoom in/out using your mouse wheel, as well as move the map of Aberdeen with your mouse.
2. This interactive map presents two modes: 'Biking Routes' and 'Hiking Routes'. Use the '+' button on the map to switch between them.

This Aberdeen map has two modes: 'Railway Network' and 'Landscape & Rural Map'. Use the '+' button on the map to navigate.

Our guide to Aberdeen

Aberdeen is often called the city of granite, greenery and marine docks. This is a famous port city and an industrial region. In the 19th century Aberdeen was famous for its granite deposits. This is the reason why the majority of ancient buildings and statues in this city are made of this material. Moreover, Aberdeen in a famous university center as here is located the oldest Royal Medical College in the UK and … Open

Despite the fact that Aberdeen has the status of an industrial city, it is annually visited by numerous travelers. A simple walk through the city will bring in a real pleasure, because its territory is simply full of many interesting and old sights. Aberdeen University is situated near the center of the city. The university was founded in 1860. Previously a college was built on the territory of the modern university. … Open

Aberdeen's main dish is an uncomplicated rowie - a butter pie, something in between a pancake and a croissant, which is smeared with jam or butter. In the old days, the rowie served as a good feed for local fishermen, who spent many hours at sea. Today, this snack can be found in any cafe and restaurant, as well as in bakeries and supermarkets. In the rest, the kitchen of Aberdeen is not much different from the … Open

Meat dishes make up the basis of the menu of local restaurants devoted to the national cuisine. Many dishes here are cooked on an open fire. Scottish cuisine is reminiscent of the traditional English cuisine. Here are also popular such dishes as puddings and porridge. While visiting local restaurants make sure you try chicken in a pot and beef cooked in beer - these dishes are considered local delicacies. Restaurants … Open

Traditions and mentality of Aberdeen

Local people are very calm and polite. They are distinguished by modesty and respect for family. Oddly enough, but when dealing with local residents it’s recommended to talk less. Too "talkative" companion can be simply considered rude. The natives are distinguished by punctual and scrupulous approach to any matter, so any sign of negligence causes a feeling of contempt. Local residents have always been … Open

One of the notable places of attraction is Provost Skene’s House. This house was built in 1545, belonging to one of Lord Provosts – Sir George Skene. The name of famous owner is used by this historic monument to this day. In the early 20th century the historic building was to be demolished, but the locals had come out to its defense. In 1953 it was restored and a museum of local lure was opened inside this … Open