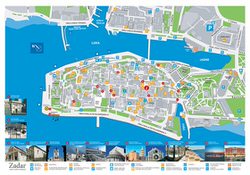 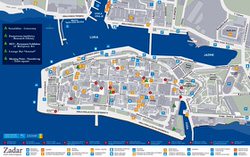 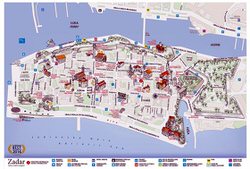 Interactive maps of hiking and biking routes around Zadar

1. You can zoom in/out using your mouse wheel, as well as move the map of Zadar with your mouse.
2. This interactive map presents two modes: 'Biking Routes' and 'Hiking Routes'. Use the '+' button on the map to switch between them.

This Zadar map has two modes: 'Railway Network' and 'Landscape & Rural Map'. Use the '+' button on the map to navigate.

Zadar Airport is one of the oldest in Croatia. It receives flights from most European countries. Its carrying capacity is in the range of three hundred thousand a year. It is located less than 10 kilometers from the city of Zadar. To get to the city’s bus station, you can use the buses of various carriers. It is worth noting that only this airport has a business terminal. You can find on its territory, special lounges for those who want to relax before or after the flight. In addition, there is a Duty Free shop, bank branches, a medical center, cafes and restaurants, and parking. … Open

Croatia is a deeply religious country. Therefore, holidays associated with religion, enjoy a special attitude. The main holiday of the Catholic world of Croatia is Easter. Its date is not fixed and, every year, it changes. The next day after Easter, Monday, is a non-working day, which speaks of the special importance of the holiday for the Croats. Women bake cakes and serve festive tables; relatives give each other memorable gifts. There are solemn church processions and gastronomic fairs on the streets of many cities. Another spectacular religious holiday is the feast of the Divine body and blood. It’s taking place on the 54th day after Easter. On this day, churches also organize solemn processions with holy gifts through the streets of the city or around churches. On December 25, Croatia, like other Catholic countries, celebrates Christmas. This holiday is considered a family one. On the Christmas Eve, the whole family gathers at a big table. The main dish of the feast is baked carp. There must be different sweets on the festive Christmas table. Already in early December, there are fairs in the central areas of the cities. There, you can buy small souvenirs and gifts for the holiday. The fairs are colorful. They also feature theatrical performances and folk festivals. It is customary to discuss plans for the next year. After dinner, the Croats often go to the temples for Christmas services. The New Year celebration in Croatia is also accompanied by mass festivities. It is customary to gather in the central squares where the best view of the festive salute opens. … Open

Our guide to Zadar

Festivals and events in Zadar

Glazbene Veceri sv. Donatu (or Music Evening of St. Donatus) is one more interesting festival in Zadar, thanks to which everyone can listen to gorgeous classic and modern music performed by orchestras from different parts of the world. The fabulous event lasts whole July and is usually held at Crkva sv. Donata. It is hard to think of a better location for the festival than a church with unique acoustic properties. … Open

Besides rafting, such activities as kayaking, SUP boarding, diving, and all kinds of cruises are very popular in Zadar. Don’t forget to try all these after the arrival to the resort as a vacation in Zadar will be incomplete without these mesmerizing entertainments. Gamblers will also be not disappointed in the resort. In Zadar, there are very interesting venues worth visiting, such as Admiral casino and bar. … Open

8. Tourists who want to explore the attractions located in the suburban area of Zadar are recommended to go to the local bus station. Every day here are organized bus tours for tourists that cover all most picturesque suburban locations. 9. Do not forget to bargain in the local markets and fairs. Even if you do not manage to reduce the price of the product you like, a seller will probably offer … Open

In Errata store, travelers will be offered a large number of irreplaceable things. It has a small department with clothes. They sell quality bags, backpacks and suitcases for every taste, as well. Travelers who have forgotten their umbrella can also buy it here. Not long ago, Supernova new trading center was opened in Zadar and immediately attracted the attention of tourists. Lovers of modern fashion prefer to … Open

Zadar for children - what to visit

The surroundings of Zadar are famous for their natural beauties. With school-age children, it is worth going on a tour of one of the picturesque national reserves. One of the most beautiful is the Paklenica National Park. On its territory, there are many routes of various levels of complexity. Here one can take a walk through the picturesque mountainous areas and forests, observe the typical representatives of the … Open

Nature lovers will be able to visit the charming Paklenica National Park. Its main value is the swift mountain rivers. Their shores have a series of beautiful rock formations. The height of some rocks is more than 700 meters. In the park, there are several beautiful caves which are also available for visiting. The National Park is very popular among lovers of hiking and mountaineering. In the warmer months, there … Open