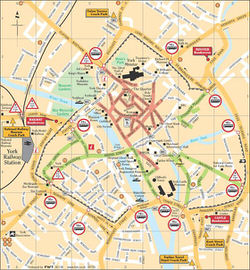 Interactive maps of hiking and biking routes around York

1. You can zoom in/out using your mouse wheel, as well as move the map of York with your mouse.
2. This interactive map presents two modes: 'Biking Routes' and 'Hiking Routes'. Use the '+' button on the map to switch between them.

This York map has two modes: 'Railway Network' and 'Landscape & Rural Map'. Use the '+' button on the map to navigate.

On January 5, on the eve of Christian Epiphany, the Twelfth-day is celebrated. On this day, it is necessary to remove all festive decorations from the house and from the street, otherwise, the whole next year will be unsuccessful. The ornaments that remain in the house can not be taken away until next Christmas. On February 14, lovers celebrate Valentine's Day. They exchange greeting cards and themed gifts. The UK is a monarchy. The entire population of the country loves and honors the royal family. Therefore, the birthday of the queen or the king is considered a national holiday. It is celebrated separately from the real date of birth of the ruling monarch. The holiday takes place on the first, second or third Saturday of June. A military parade is organized, which is attended by all the members of the royal dynasty. The bright and noisy holiday ends with a grandiose salute. … Open

Our guide to York

Festivals and events in York

Mid-November is the time for Aesthetica Film Festival in York. This festival is dedicated to short films. It is held not only in cinemas but also in cultural venues in York – museums, theater, and galleries. Every fashionista dreams of visiting York at the end of March because the city hosts York Fashion Week at this time of the year. The schedule of the popular festival features fashion shows and interesting … Open

Askham Bryan Wildlife & Conservation Park is a fabulous destination for travelers who like nature. At this park, it is possible to see monkeys, raccoons, kangaroos, armadillos, and turtles. During a vacation in York, tourists may also find it exciting to visit local artisan shops and learn new crafts at York Cookery School or Bish Bash Pot. To enjoy entertaining activities and learn more about the culture of the … Open

4. Many hotels are equipped with bathrooms that are different from the usual. They have separated taps for hot and cold water. This is done to save water. Mixer taps are usually installed in new and luxury hotels. 5. Power supply voltage is 240V, so before you start your journey make sure to check the compatibility of all the appliances that will be used in the hotel. In luxury hotels adapters and … Open

Those who enjoy markets will definitely like Shambles Market. It is surrounded by outstanding historical sites. There you'll find seasonal vegetables and fruits, a small department with clothes and souvenirs. It is an ideal place for gastronomic shopping. The best city's bakeries and butchers, as well as pavilions that offer dairy products from local farmers, are located there. Lovers of sweets will like it here, as … Open

York for children - what to visit

For those who like water entertainment the most, the water park Water World can be recommended. It is quite small, but contains everything that is necessary for a comfortable holiday with the whole family. Visitors can enjoy a beautiful pool with slides, a relaxation area with a Jacuzzi and a cozy cafe. Those who like to relax in a quieter and less crowded environment should best visit the water park on a weekday as … Open

The Trade Guild Halls is an equally attractive site. It is also one of the oldest buildings in York. The building was built in 1357. The initiators of its construction were the wealthiest inhabitants of the city. They decided to create their own religious brotherhood, whose meetings were held in this house. The brotherhood existed until the 16th century. Afterwards, the beautiful building with solemn decoration … Open