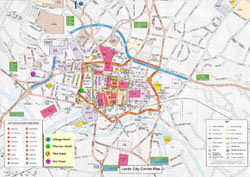 Interactive maps of hiking and biking routes around Leeds

1. You can zoom in/out using your mouse wheel, as well as move the map of Leeds with your mouse.
2. This interactive map presents two modes: 'Biking Routes' and 'Hiking Routes'. Use the '+' button on the map to switch between them.

This Leeds map has two modes: 'Railway Network' and 'Landscape & Rural Map'. Use the '+' button on the map to navigate.

The main holiday of Northern Ireland is St. Patrick's Day, who is the heavenly patron of this country. The fest is held on the day of his death, on March 17. The holiday is celebrated on the territory of the whole of Great Britain, in a number of cities of the USA and other countries. A grand parade is held in London. In Manchester, there is a two-week Irish festival. There are some cultural events and a market in the holiday timeframe. The festival ends with a colorful parade. The main events take place in Belfast. The streets are filled with green decorations. Even the water in the fountains is painted green. October 21 is the unofficial celebration of the Day of the Apple. There are fairs where one can not only buy apples but also try dozens of various dishes with this fruit, as well as take part in funny apple contests. … Open

Our guide to Leeds

If you like Indian food, it's worth visiting the Curry Lounge restaurant. It is a popular place with wide choice of meals and original interior. Dining hall has minimalistic decoration with hand-made ornamental patterns on the walls. For the first time visitors it's highly recommended to try the house special curry. Even gourmets can't resist its taste and flavor. Those who prefer less formal atmosphere may like … Open

Traditions and mentality of Leeds

Leeds is one of the oldest British cities where people keep honoring their historical traditions. Locals are proud of their nationality, their way of life is strikingly different from that of most European countries. Like hundreds of years ago, they prefer measuring distance in miles, which is far from clear to European tourists. Pubs are among the favorite places of locals, some of them have been working in the city … Open

The most luxurious and recognizable historical facility of Leeds is the Town Hall building. Its tower, whose height is 68.6 meters, is visible from many city streets. Queen Victoria herself took part in the opening of the grand building. In the construction such huge sums were invested, which caused discontent of many residents of the city. During the Second World War, the Town Hall was badly damaged by the … Open

Leeds for children - what to visit

The entertainment center Monkey Maze is focused on the youngest visitors. In this amusement center, there are safe soft zones for games. Every day, the animation team organizes interesting games and entertaining events for kids. Children can play with their favorite toys or engage in creativity here. There is an excellent room for children’s parties in the center. For those who have long dreamed of … Open

Otley Market will appeal to those who want to feel like a typical local and buy fresh farm products. The choice of vegetables and fruits is more than impressive here. In the warm season, visitors can buy a bouquet of chic flowers for a reasonable price. If you go a little further, you'll stumble upon interesting clothing rows where you'll be offered colorful t-shirts, bags, scarves, and other wardrobe items and … Open

6. In restaurants and cafes it’s customary to leave a tip, the size of which depends on the level of the eating place. In the prestigious restaurant service charges are included in the bill, usually it doesn’t exceed 15% of the total order. In restaurants of the middle class a tip has to be at least 10%, and in small cafes and restaurants it is common to leave 5% of the total bill. 7. … Open