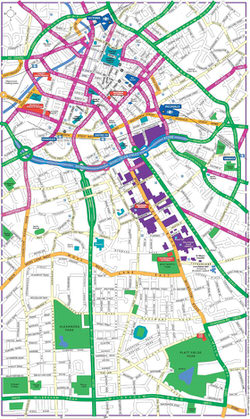 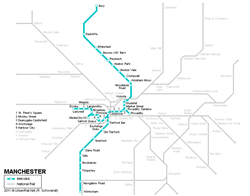 Interactive maps of hiking and biking routes around Manchester

1. You can zoom in/out using your mouse wheel, as well as move the map of Manchester with your mouse.
2. This interactive map presents two modes: 'Biking Routes' and 'Hiking Routes'. Use the '+' button on the map to switch between them.

This Manchester map has two modes: 'Railway Network' and 'Landscape & Rural Map'. Use the '+' button on the map to navigate.

Our guide to Manchester

Traditions and mentality of Manchester

Many people associate Manchester with football, for many years the city lives a rich sports life. On one of its central streets is the world's largest thematic Museum dedicated to football, and fans of local clubs "Manchester city" and "Manchester United" today there are literally in every country in the world. The city has two first-class stadiums, which are the home arenas of these clubs. It will be interesting … Open

The building of the Central Library is an outstanding architectural attraction. It has an unusual rounded form and a domed roof. In this building with slender columns, the most valuable collections of old books on philosophy, medicine, science and art are kept. The building of the library was constructed in the 1930s. From the moment of completion of the construction, it remains unchanged and is a spectacular … Open

Manchester for children - what to visit

There are excellent recreational facilities for active family entertainment in Manchester. You can find many beautiful parks and entertainment centers in the city. It would be interesting to visit the Chorlton Water Park at any time of the year. This park is located on the shore of a lake and is great for organizing a picnic in the warm season. The park has a lot of free space thus suitable for hiking and cycling. In … Open

Manchester is a great city for shopping, there are large shopping streets, and ultramodern shopping centres, and a lot of small speciality stores. The location of the most prestigious shops and shopping galleries is the historic King Street. Its main value is the spectacular buildings of the 18th century, which used to house large banks, and now there are boutiques of famous brands in historical buildings. Local … Open

1. National currency is the most optimum way to pay for purchases and services. The cash should better be exchanged before a journey. Currency is exchanged in local banks and exchange offices however the transactions are charged with high fees. 2. Travelers should keep in mind that the prices for goods in Manchester are considerably higher than in other European cities. However in the city the … Open

Indoor climbing is also popular in Manchester, as evidenced by the number of climbing walls that can be found in the city. Among them-complexes Manchester Climbing Centre, Rock Over Climbing, and Depot Climbing Centre. For those who want to have a good laugh and get a charge of positive emotions, it is useful to mention the best comedy clubs that are located in Manchester. These are the Comedy Store, as well as the … Open