Cuisine of Phoenix for gourmets. Places for dinner - best restaurants 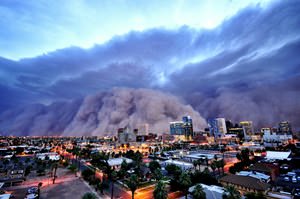 The largest number of Injun dishes among all US territories is preserved in the Phoenix cuisine. However, this is not surprising, because this is where the largest Native American reservation is located. If you really want to touch Injun cuisine, it will be better to go to Navajo. Of course, there are many restaurants that are owned by Native Americans in Phoenix. But many dishes are cooked a little easier, ignoring the traditional subtleties, counting on visitors because of the large flow of tourists here. However, if you want, you can find places with dishes from all over the world, from European to African. So if culinary experiments are not for you, just look for a familiar cuisine.
Your active city break in Phoenix. Attractions, recreation and entertainment - best places to spend your day and night here
Phoenix is ​​perfect for family holidays, and many of its entertainment facilities are aimed at families with children. Phoenix Zoo that looks like a picturesque oasis among desert …

Open
There are also restaurants with true American cuisine here, like Rusconi's American Kitchen. If you decide to taste something from the local diet, you can start with blue corn. The unusual color was obtained without artificial human intervention in the plant's DNA more than a dozen years ago. So you cannot worry about your health. Blue corn not only looks unusual but also has great taste. Injuns often bake tortillas made from cornmeal. They use them instead of bread. If you go to a reservation, remember that the most favorite way of cooking meat among Native Americans is over an open fire. The Injuns cook absolutely all parts of the carcass this way. So you can taste beef hoof or liver, for example.
Be sure to taste the fried rabbit. This is a fairly simple dish. However, it is incredibly tasty and has a very long history. You can also order meat soup with beans, fried onions, and garlic. This is another hearty and easy-to-prepare dish. Don't be surprised if you feel the malt flavor. The Injuns add crushed cedar ash to many dishes. Sumac soup is very unusual in taste. This is a vegetarian dish. It rather resembles red jelly in appearance. It tastes like nothing else in the world. Copyright www.orangesmile.com
Top hotels in Phoenix for business trip or short vacation
Phoenix is glad to offer hotels of various styles and directions, so it's quite easy to choose a suitable one. Prestigious Arizona Biltmore Hotel housed in a complex of completely restored …

Open
If you are going to any restaurant, don't forget that tipping is mandatory in the local culture. If you decide not to leave them, then be ready for questions on the topic "What did you not like?". There are also many dishes borrowed from Mexican cuisine in Phoenix. For example, these are stuffed peppers, fajitas, burritos, chili con carne, and taco. It is interesting, that there are almost no fish dishes here despite the fact that chefs use seafood in cooking in general. But beef, chicken, and Turkey are present almost everywhere. Legumes, cauliflower, asparagus, and rice are popular here. Arizonans don't use pasta and cereals too often. 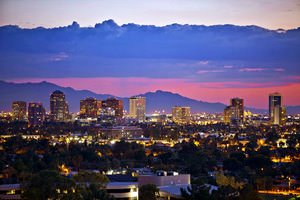 If you get to the city on Thanksgiving Eve, don't miss the chance to taste stuffed Turkey. However, Turkey meat is also tasty in other dishes. You can eat them on any day. Local grilled pork ribs, meatloaf, roast beef, and baked chicken are also delicious. Don't be surprised that there are many seasonings in the local cuisine. Garlic powder, ginger, oregano, nutmeg, and black pepper are popular with Phoenix chefs. It is interesting, the locals who are really very fond of fast food, eat regular bread very rarely. They most often use it as part of a sandwich.
Shopping in Phoenix - main shopping streets, outlets and boutiques
Phoenix is a good place for shoppers. After all, this is the state capital, populated by one and a half million people. So there are many major shopping centers here. Their number is enough …

Open
Oatmeal, muesli, scrambled eggs or rice porridge are popular for breakfast. An American can eat a Burger as a snack during the day. The locals think this is quite normal. The attitude of local residents to salads is interesting. If the salad is just an addition to the main dish in many parts of the world, it can be eaten separately here. The famous "Caesar" is quite hearty for the role of the only dish for dinner. Sliced lettuce leaves with sauces are often automatically included in the price of lunch in Phoenix restaurants. 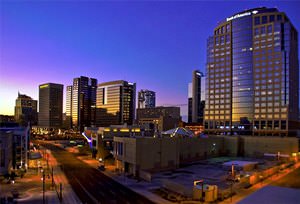 You can order doughnuts, pancakes with honey or jam, cheesecakes or muffins as a dessert. Fruit under a layer of caramel, chocolate cookies, pumpkin pie or pecan nuts are also delicious. You should taste the local chocolate bars and sweets. Banana bread is interesting. If you order tea, remember that locals drink it chilled with lemon or milk and without sugar. Milkshakes, fresh juices, Cola, and coffee are popular in Phoenix restaurants. First of all, you should taste beer, Bourbon, and wine from alcohol.

This guide to cuisine and restauraunt in Phoenix is protected by the copyright law. You can re-publish this content with mandatory attribution: direct and active hyperlink to www.orangesmile.com.
Phoenix - guide chapters 1 2 3 4 5 6 7 8

City tours, excursions and tickets in Phoenix and surroundings

Searching where to eat - restaurants and cafe on Phoenix map

Cuisine and restaurants in the neighbours of Phoenix

Arizona
The culinary symbol of Arizona is blue corn; it differs from the usual yellow grain not only with color, but also with its excellent taste. Indians bake delicious cakes of corn flour; cornmeal is often mixed with regular wheat. Meat treats are also common in Arizona. Locals prefer to roast meat over an open fire only; absolutely all absolutely parts are used for meals. ... Open »
Las Vegas
The location of Stratosphere restaurant is a tower of a hotel with the same name. This restaurant has won fame and love among tourists long time ago. The restaurant’s hall is continuously rotating and makes a complete circle in one hour. Thus, during their meal, the guests of the restaurant can admire the panoramic view from a height of 360 meters and observe wonderful Las ... Open »
San Diego
The eating house features a slightly higher pricing policy than the previous café however this feature will be perfectly balanced with a friendly and cheerful atmosphere filling the hall of the establishment serving its guests till late night. Meat dishes fans will hardly find a better place to eat and rest than the Cowboy Star eating house. The restaurant offers a genuinely ... Open »
Ontario Town
If you'd rather prefer hearty "men's food", be sure to order "Carne asada fries" at one of the local restaurants. Behind this long name is a generous portion of french fries with fried meat, typically served with interesting sauces and vegetable garnishes. It is believed that the birthplace of this simple and satisfying dish is San Diego, but now it is popular in all cities ... Open »
Anaheim
Marri's Pizza & Italian is a no less attractive small restaurant that specializes in Italian cuisine. During the daytime this place is always full of visitors. One of the main reasons for that is in delicious set meals at affordable prices offered in the restaurant. This attracts many tourists and young people. Carnation should be definitely distinguished among the city's ... Open »
Los Angeles
The same attracting establishment is the Katana restaurant which menu specialities are grilled foods. The restaurant is placed in the marvelous historical building Plaza Del Sol and the design of the restaurant is executed in a unique foregone centuries style. Thus the guests can sit at majestic grand tables aged more than 400 years. The selection of dishes in Katana ... Open »

Travel notes on best cuisine and restaurants of Phoenix (USA) on OrangeSmile.com. Famous recipes and traditional dishes and courses in Phoenix restaurants. Where to eat - our recommendations on popular places in Phoenix, where you can taste delicious meal and also spend a good time with your friends.