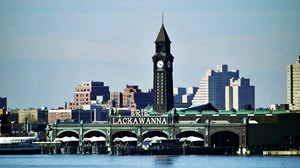 The coastal area of New Jersey with its warm and calm beaches is an ideal choice for comfortable leisure. Many of local beaches are oriented on family vacation and are known for multiple entertainment and recreation centers. The central beach of Jersey City

located in the southern part of the city is very popular in summer.
Guide to New Jersey State sightseeing - things to see and to visit
State of New Jersey occupies the scenic peninsula; it’s widely regarded as the most colorful and contrastive state in the USA. There are huge industrial cities, charming tourist areas …

Open
Among its distinctive features are huge choice of entertainment places from classic aqua-parks to exotic tattoo studios and attractive restaurants. Central beach of Jersey City is very long and covered with fine snow-white sand. It's an excellent place for comfortable relaxation for all day long; many of its entertainment places are open till late night.
Travelers preferring calm atmosphere should visit nearby Ocean City

resort. This aristocratic resort has being attracting tourists for more than a century. Nowadays it’s a well-developed resort able to delight even the most demanding guest. It offers as much of entertainment, as busy Jersey City, yet retains calm and relaxed atmosphere. Ocean City is widely regarded as the luxurious family resort, so most of its visitors are tourists with children. Copyright www.orangesmile.com
Top hotels in New Jersey State for business trip or short vacation
State of New Jersey is widely known for its luxurious hotels. There are lots of original designer's hospitality places and also hotels for fans of various activities. Molly Pitcher Inn hotel …

premium resort is situated in the national reserve area. It became premium long before World War II and was open for privileged persons only. Situation drastically changed after the war. Nowadays resort hosts number of luxurious hotels and attracts people willing to take a break away from civilization. Beaches of Asbury don't have too much of equipment or entertainment places, but they will be an excellent choice for eco-tourists or as a break from hustle and bustle of the city. 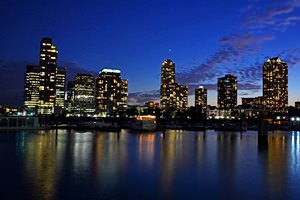 The excellent beach of Atlantic City

is also worth mentioning. Spread along the entire city coastline this beautiful beach is more than 10 kilometers long; life never stops there. Scenic esplanade runs along the shore and hosts numerous hotel complexes, popular casinos and other entertainment places. This beach has excellent equipment and combines busy areas with quiet zones. Coastal area is well-kept; even sand is being bolted with special machines and completely replaced once a year. State of New Jersey offers its guests an excellent choice of beach resorts and many of them are luxury ones. Despite their high class, most of resorts here are quite affordable even for thrifty tourists.

This guide to top beaches in New Jersey State is protected by the copyright law. You can re-publish this content with mandatory attribution: direct and active hyperlink to www.orangesmile.com.
New Jersey State - guide chapters 1 2 3

Interesting places in New Jersey State for your excursion 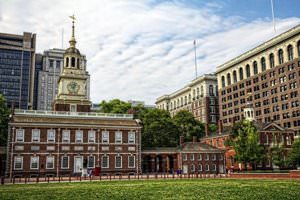 Distance from New Jersey State center - 35.6 km.
One of the most interesting stages of the tour is going up to the tower, which offers great views of Independence Square. Once the tower had a bell, which in 1776 called residents for proclamation of the Declaration. Now the bell is kept in a separate pavilion, and the tower features so-called centennial bell, which was made in 1876. Travelers can visit Independence Hall 365 days a year. Schedule of guided tours should be checked in advance. … Read further 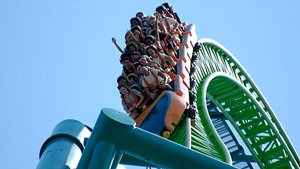 Distance from New Jersey State center - 29.5 km.
Huge speed allows the small train to climb on top of the tower of 139 meters height; after that it is rapidly slipping down under the influence of gravity. It's worth noting that the tower has a 90-degree rise, so thrill is guaranteed to fans of roller coasters. A few years after opening, Kingda-Ka remained the highest in the world, but recently it yielded to another unique ride. An opportunity to enjoy the great speed and feel the freshness of the air, being at a great height, attracts a huge number of people. In season Kingda-Ka rides about 1,400 people hourly. In 2009, the ride had to close, because a high metal tower was struck by lightning during a storm. However, it was quickly repaired. The ride has been tried by millions of people from all corners of the planet. … Read further

Abaco
A well-known place for a holiday is the sandy beach of Great Guana Cay, located on the island with the same name. The beach has the first-class equipment. Wonderful landscapes remain the main value of these places. People who are fond of snorkeling will like the seacoast. The variety of underwater inhabitants is incredibly high. The length of the beach is more than 10 ... Open »
Florida
In the central part of the east coast there is the popular Daytona Beach. The beach is several tens of kilometers long; it is covered with very soft and lovely creamy sand. You can find a secluded place to stay on the beach even at the height of the tourist season; however, there are also quite busy coastal areas with developed infrastructure. Among the west coast beaches ... Open »
Providenciales Island
The main feature of the picturesque Long Bay is the constant presence of a strong wind that draws fans of surfing and parasailing there. The beach doesn’t have noisy entertainment facilities; it attracts fans of staying in the wilderness. The scenic stretch of coastline is considered inaccessible, so it’s never overcrowded. Fans of comfort are recommended to take special ... Open »
Cozumel Island
The picturesque Playa Palancar is on the west coast of Cozumel. The upscale water sports center, as well as one of the most popular restaurants on the island is situated there. The beach has long been visited by diving fans, as picturesque Arrecife Palancar is close to the coast. These amazing places are suitable for diving, even for novice divers. The depth in the area of the ... Open »

Travel guide to best natural recreation areas in New Jersey State for a quiet and secluded summer vacation. Fascinating hidden beaches, amazing bay and coves to sunbathe and swim in the gentle waters of the resorts of New Jersey State.