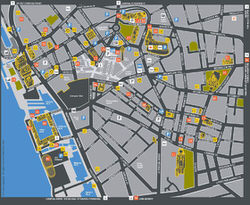 Interactive maps of hiking and biking routes around Liverpool

1. You can zoom in/out using your mouse wheel, as well as move the map of Liverpool with your mouse.
2. This interactive map presents two modes: 'Biking Routes' and 'Hiking Routes'. Use the '+' button on the map to switch between them.

This Liverpool map has two modes: 'Railway Network' and 'Landscape & Rural Map'. Use the '+' button on the map to navigate.

Our guide to Liverpool

Wayfarers Shopping Arcade is one of the best places to buy premium apparel, shoes, and perfumes. The two-storey shopping mall has more than 30 shops of different specialization. There are also several popular restaurants and cafes. Another advantage of the shopping arcade is that there are several creative designer shops there. For example, visitors will find shops that sell exclusive designer bags and stylish … Open

Hotels with history of Liverpool

Hope Street Hotel is open in an eye-catching historical building not far from the heart of the city. Even after a thorough reconstruction, the building has kept many elements of the original style. Old brick walls, which can be seen in both guest rooms and public areas, add special charm to the hotel. The design of rooms is made in a minimalist style in order to underline the historic atmosphere of the building. … Open

Another luxury place for walking is Beach Formby Point. At Formby Cape, you can enjoy nature and a beautiful view of the massive sand dunes. Here you can easily see sand lizards and toads, so, lovers of photos, do not forget your cameras - the photos here are just magnificent! This promontory is a little further from Crosby's beach, half an hour's drive from Liverpool. The surroundings of Liverpool are the perfect … Open

Weekend in Liverpool in original style

If you consider yourself a fan of the Liverpool Four, don’t limit your excursion program to visits to popular museums and souvenir shops. There are many secret places in the city, the symbolic meaning and wondrous history of which are known only to most devoted fans of the band. Mathew Street, for example, is a “holy” place for music lovers as that is the location of old Cavern Club - the first concert … Open

Festivals and events in Liverpool

In late August, the annual week of the Beatles band will take place in the Liverpool. This is the most significant event for each and one fan of this glorious Liverpool quartet. Dozens of music bands from all over the world come here, to the birthplace of the legendary quartet to play their favorite repertoire. The main International Beatleweek venue is at the famous Cavern Liverpool club on Matthew Street, where … Open

The refined atmosphere of 62 Castle St boutique hotel never ceases to conquer hearts of romantic travelers. All guest rooms of the hotel are made in individual style and distinguished by a large size. Spacious rooms feature elegant designer furniture of unusual shapes. Some rooms have stylish looking leather sofas and armchairs, and in other rooms, guests will find retro style furniture. 62 Castle St is traditionally … Open