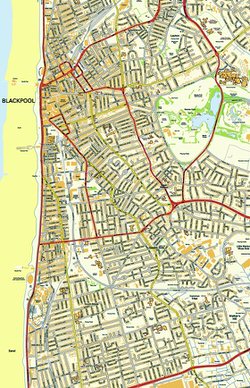 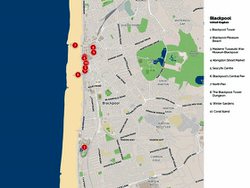 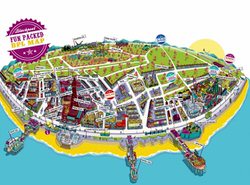 Interactive maps of hiking and biking routes around Blackpool

1. You can zoom in/out using your mouse wheel, as well as move the map of Blackpool with your mouse.
2. This interactive map presents two modes: 'Biking Routes' and 'Hiking Routes'. Use the '+' button on the map to switch between them.

This Blackpool map has two modes: 'Railway Network' and 'Landscape & Rural Map'. Use the '+' button on the map to navigate.

The most popular public transport in the country is a bus. Inside the city, buses run in different directions every 15-20 minutes. There are lines working from 4 am to 1 am. There are night buses on the most popular routes. On holidays, the amount of transport is significantly reduced. You can buy bus tickets at roadside kiosks, at bus stops or at train stations and directly from the driver. You can buy a one-time ticket or a travel card. In the second case, you can save a little. Long-distance buses, as a rule, depart from bus stations every hour. Much attention is paid to the comfort. Some companies offer their passengers drinks and light snacks. … Open

Our guide to Blackpool

It's quite possible to proceed with tasting high-quality national products in the Abingdon Street Market, where a decent choice of meat delicacies is presented, as well. On the market, they sell delightful honey, which tourists often buy as a gift for their loved ones. Excellent ready-made meals, fresh bread and other pastries from local bakeries are available at affordable prices. Those who love needlework, … Open

Hotels with history of Blackpool

The vintage interior is the main feature of top-rated Rossdene House Hotel. The family hotel provides tourists with 8 rooms; on the top floor, there are very nice attic rooms. In addition to the antique decor elements, the hotel stands out with its keen observance of old gastronomic traditions. In a family restaurant, visitors can try some of the most popular national treats, which have been prepared according to … Open

8. Large shops and trading centers accept payments made by credit card. However, if you plan to go shopping to the local markets or visit shops in the city’s suburbs, you will need to get paper money. 9. Before you check in to your hotel, make sure you have specified the list of services. Hotels of the same category can vary significantly in terms of the number of additional services … Open

Failing to visit The Blackpool Tower when traveling in Blackpool could be considered a crime. Being the most famous tourist attraction in the city, it offers unimaginably beautiful views of the city lying at the foot of the mountain. It often hosts all kinds of events, there are several restaurants offering delicious food (White Tower Restaurant is the most popular one). Children particularly enjoy The Blackpool … Open

Festivals and events in Blackpool

If you are lucky enough to visit the city in mid-March, you can witness Gin Festival Blackpool. Ballroom Tower serves as its primary venue. The sea of gin, music, entertainment, which seem to flow like a river - this is what distinguishes this festival. This is an excellent opportunity to charge positive energy for a long time. Another interesting event that gives a lot of positive emotions is Blackpool Air Show, … Open

Marlow Lodge Hotel enjoys constant popularity among romantics and loving couples. Its cozy rooms painted in white and blue tones are ideal for a romantic stay. Some of them are decorated in an elegant modern style, while others have a huge wooden bed with a snow-white canopy. The comfortable hotel is suitable for couples of all ages, as it is characterized by a very relaxed and casual atmosphere. A joint stay … Open