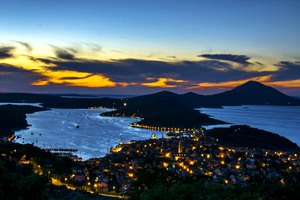 Losiny, like other resort areas in Croatia, lives and thrives at the expense of tourists. Nobody wants to lose clients, and therefore the locals are always emphatically polite and friendly. Sometimes it's hard to say whether this attitude is sincere or not. But, nevertheless, you shouldn’t expect troubles from the local people. There is a very low crime rate but it's still worth keeping an eye on your belongings: in the places where the tourists gather, there is a chance to suffer from the pickpockets. To avoid trouble with the law, look at the warning signs – in some areas it is forbidden to walk on the streets without a shirt or in a bathing suit under the threat of a fine.
Family holidays with kids in Losinj Island. How to entertain your child, things to show to children.
The island of Losinj has a lot of both historical and natural attractions. There are places to take a walk with your child in silence and peace and to exercise. On the territory of Camping …

Open
Please note that the local residents have a rather unusual feature – they do not refuse and usually do not even mention any restrictions. Therefore, if you have agreed on something with the Croat, then remember that here "tomorrow" is a synonym for the word "never". The local residents are not very dependable and therefore can easily forget about their obligations. Simply because it is better to agree and not to do something than to refuse a request. There is a similar situation with the violation of the public norms and local legislation – you are unlikely to be warned that your actions do not fit into the usual framework.
Do not call the Croats “Yugoslavs”, it's unpleasant for them. The locals are real patriots of their country, they love their culture, and try to adhere to long-standing traditions and customs. A couple of compliments to Croatia will help you to improve a mutual understanding with a local more than half an hour's exchange of common courtesies. If you manage to visit a Croatian wedding, then you will see many traditional rituals. For example, the husband's relatives remove the veil from the bride and clothe her in an apron, showing that from now on she is the mistress and the wife. Copyright www.orangesmile.com
Cuisine of Losinj Island for gourmet with top restaurants and cafe
In Losinj's restaurants, you can taste both the dishes that are typical for central Croatia and those that the Adriatic coast is famous for. One of the most delicious and unusual local …

Open
Note that it is customary to bargain not only in the markets but even in small coastal cafes and shops. The main thing is not to push – the Croats, unlike the Asians, see the trade not as a competition but as a process that brings mutual pleasure. Local women often become the actual head of the family, manage the finances, and make the decisions. Women also often occupy managerial positions. At the same time, many representatives of the fair sex, on the contrary, prefer a career as a housewife. Traditionally, men give a lot of compliments to any woman, not paying attention to her appearance. So, if you travel to Losinj alone, be prepared for increased attention. 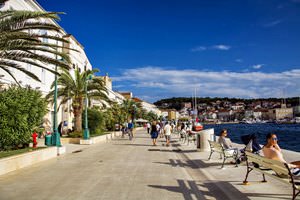 The tradition of "korzo" came to Croatia from Italy. Every evening the streets of the cities are filled with strolling men and women in their best outfits. On holidays, all settlements are filled with the sounds of music, and many activities include traditional dances in national costumes. The sounds of the unusual local instrument, tambura, are the loudest on the streets of cities in January and February, during the Carnival. The slow, measured life of the island during the holidays is accelerated several times – the Croats like to have fun and they celebrate all the important dates in a big way.
Excursion over cultural sights of Losinj Island - 'must visit' points of interest
Losiny, like many other islands of the Adriatic, was inhabited far back in Antiquity. The proof of this fact you can find not only in the collections of the local historical museums but also …

Open
In April, the island hosts two festivals: the festival of cuisine and the flowers. At the end of July, you can attend the large-scale water polo tournament, and at the end of summer you can watch the sailing regatta. In the beginning of August in Veli Losin, there is the Day of Dolphins, and in Mali Lošin, every first Saturday of the month the embankment is filled with the sellers of the souvenirs, liqueurs, honey, and other local products during the Fragrances festival. The important Catholic holidays are also celebrated here greatly, which is not surprising, because the vast majority of the island's inhabitants are Catholics. The most large-scale celebrations are held in honor of Christmas, Easter, and Epiphany Day.

This guide to traditions and festivals in Losinj Island is protected by the copyright law. You can re-publish this content with mandatory attribution: direct and active hyperlink to www.orangesmile.com.
Losinj Island - guide chapters 1 2 3 4 5 6 7 8 9

One of the main sources of income in Croatia, especially in coastal regions, is tourism. Local residents manage hostels and private hotels. Therefore, people are extremely polite with foreigners. Even the most unexpected or complex request is met with a consent and a smile. However, this does not mean that they immediately rush to work. On the contrary, Croats are very slow. They like to postpone everything for later and do not rush to do their job. They are pretty unpunctual, but utterly polite and correct. Although, politeness can often be insincere. In Croatia, it is customary to bargain and discuss the cost of goods or services, especially in shops and even cafes in coastal areas. … Open

Colors of Losinj Island in photos

Traditions and festivals in cities around Losinj Island

Rab Island
If you have asked a Croat for something, remember that here, on the one hand, they do not like to refuse, and, on the other hand, they like to postpone everything for the mythical “tomorrow”, which never comes. In general, the Croats are people of contrasts. They are not too punctual but they expect punctuality from the others. They are completely unreliable but if they ... Open »
Pag Island
The Winter Carnival is the most famous holiday on Pag. It begins after the Epiphany. Three days festival attracts not only locals but also Croats from other parts of the country and tourists. The Summer Carnival is oriented on tourists. It is held on the last weekend of July. The festival was made to show the culture of the island and its traditional cuisine. Pag Art Festival ... Open »
Cres
However, don’t think that locals live according to medieval customs and traditions. Most of the women dominate in their families, but men can hardly accept that. Local men often flirt with girls and women. They are even not embarrassed by the presence of their girlfriend. However, they will just pay a couple of compliments, nothing serious. At night small streets of local ... Open »
Krk
Besides drinking local wines, festival guests are invited to taste great local cheese and honey, as well as to buy amazing handmade souvenirs. This holiday won’t be complete without exciting jousts; there are interesting staged battles, concerts and other entertainment events on the square. The picturesque island of Krk is the ideal place for those who prefer event tourism ... Open »
Istria
The picturesque town of Pula is a permanent venue for the major film festival; cinemagoers and filmmakers visit it in July. The festival takes place simultaneously with the Opera Music Festival that would be interesting even to those who have never been interested in opera singers. Istria is ready to offer its guests a lot of exciting recreational opportunities. Travelers may ... Open »
Zadar
The city trade fair is a no less interesting celebration, which traditionally takes place in the period from June to August. On weekends numerous stalls are installed in the main streets and squares of the city. Here visitors are welcome to purchase numerous fresh products, various sweets, sweet wine and interesting souvenirs. Full Moon Festival is a very original and ... Open »

Cityguide on traditions, mentality and lifestyle of people in Losinj Island. Learn the best periods to visit Losinj Island to discover its soul - authentic festivals, events and celebrations. We will also reveal the interesting habits, attitude towards the world and to tourists in Losinj Island.