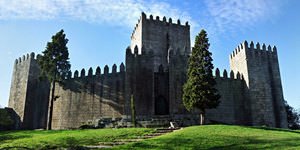 Casa do Ribeiro
Check on the map. From Guimaraes center - 4.1 km
An essential feature of the hotel infrastructure of Guimaraes is the variety of historical hotels, each of which is unique. There is a country house called Casa do Ribeiro

situated in the picturesque area of ​​Selho. It is a priceless architectural monument that has hundreds of historical artifacts hidden within its walls. The villa was built in the year 1688, and a unique painted mural with frescoes in its living room managed to be preserved. The hotel has three rooms each of which is furnished with priceless antique furniture. Furthermore, the rooms are decorated with antique carpets, portraits of the former owners of the villa, antique vases, and utensils, as well as crystal chandeliers and accessories made from precious metals.
Guimaraes Studios Lounge
Check on the map. From Guimaraes center - 0.9 km
Another unique establishment is a modern hotel called Guimaraes Studios Lounge

, situated in the central area of ​​the city. Despite the fact that modern designers worked on putting the interior of the hotel together, it is still of great historical value. The hotel was founded in a restored 19th-century building and has 11 unique rooms. In some rooms, the original ceilings with beautiful stucco molding were preserved, while in others you can see parts of the city walls that were built as far back as the 13th century. In a classy hall whose ceiling is decorated with ancient frescoes, you will find today a cozy bar. One of the main secrets of the hotel is the ancient well preserved within its walls. Copyright www.orangesmile.com
Pousada Mosteiro de Guimaraes
Check on the map. From Guimaraes center - 2.1 km
The beautiful building of the former Augustinian monastery was chosen as the location of the Pousada Mosteiro de Guimaraes

which was founded in the 12th century. Its scenery is also full of historical luxury; the building has both stone and wooden poles, skillful painting on the walls and ceiling, all preserved. The historic furniture and old carpets help lay emphasis on the atmosphere. A charming courtyard with galleries and a small landscaped garden were safeguarded in the building too.
Hotel da Penha Check on the map. From Guimaraes center - 3.2 km
In one of the most picturesque areas of the city is located the Hotel da Penha

. The lodge has a setting that surpasses that of many historical museums in the world. In an attractive historical building, it was possible to restore the old finish made from noble wood, which by the way forms the basis of its aristocratic interior. The rooms of the hotel, as well as its public areas, present a rich collection of antique furniture, paintings, and sculptures. In the living room, you can see a huge medieval-style chandelier. It should also be pointed out that during the warm season guests have the opportunity to relax in the hotel’s picturesque garden.
Check the hotel prices and availability
The Calvos area has an attractive guesthouse offered to travelers, talking about the Quinta De Cima De Eiriz. Six of its cozy, specially designed rooms have been set up in a beautiful stone house that is over 300 years old. For several centuries, the appearance of the stone building has remained unchanged, and it was possible to restore the original interiors. You can see beautiful carpets and handmade wooden furniture just about everywhere. There are also ancient paintings on display on the stone walls.
Casa de Sezim Check on the map. From Guimaraes center - 4.5 km
A vacation in the hotel Casa de Sezim

, promises to be a fascinating and unique one. Eight of its rooms were equipped in the building of an old winery. The hotel also houses romantic rooms decorated with exceptional 19th-century French wallpapers and containing antique furniture. In addition to comfortable rooms, guests have access to a beautiful lounge with a fireplace, which displays a rich collection of paintings and ancient statuettes. For many years, the unique historic hotel has remained a permanent venue for tastings of elite wines and hosting other thematic events related to the culture of winemaking.
Check the hotel prices and availability

This guide to historical hotels of Guimaraes is protected by the copyright law. You can re-publish this content with mandatory attribution: direct and active hyperlink to www.orangesmile.com.
Guimaraes - guide chapters 1 2 3 4 5 6 7 8 9 10 11

Ancient hotels in the neighbouring cities of Guimaraes

Braga
Hotel Sao Nicolau occupies a classic modern building. Its interior is also designed in accordance with the traditions of past centuries. The rooms are beautifully decorated in wood and marble and the walls are adorned with genuine paintings and hand-painted tiles. On the ground floor there is a cozy restaurant with panoramic windows. Its hall is decorated with massive wooden ... Open »
Porto
The high class Castelo Santa Catarina is also open in a strikingly beautiful old castle. All guest rooms are made in the style of the beginning of the 20th century and feature charming wooden beds with high hand carved headboards, small mahogany coffee tables, and many other antique furniture pieces. The design looks complete with skillful draping and textiles of pastel colors, ... Open »
Valladolid
A historic building with a spectacular snow-white facade is occupied by Melia Recoletos Boutique Hotel. Its interior has managed to harmonize the most beautiful traditions of past centuries and modern fashion trends. Stone staircases with forged handrails were restored inside, and a beautiful finish of rare species of wood and marble are present everywhere. The hotel presents ... Open »
Madrid
Fans of traditions of the past will be impressed by the exclusive Hotel Ritz by Belmond. The palace, in which the hotel is open, is widely recognized as one of the most beautiful buildings in the city. Fortunately, it has retained its original grace and luxury. Marble columns in the hall, big crystal chandeliers in medieval style, a rich collection of paintings by outstanding ... Open »
Bilbao
Tourists who prefer staying in a more relaxed atmosphere should not ignore Hotel Vista Alegre. Housed in a historic building, it offers 35 rooms featuring a pleasant modern design. Public areas of the hotel are decorated in accordance with the traditions of the past. A marble floor and staircases with wide steps have been restored inside the building. Unique works of art are ... Open »
Biarritz
The history of Hotel Saint Julien is incredibly interesting. It can be found in a spectacular 19th-century mansion - a family residence. Each of the hotel's twenty rooms creates a romantic and sophisticated atmosphere complemented by restored antique furniture and authentic works of art. The owners of the old mansion have managed to preserve its pristine atmosphere as much ... Open »
OrangeSmile.com - online travel reservation expert providing reliable car rental and hotel booking services. We feature more than 25.000 destinations with 12.000 rental offices and 200.000 hotels worldwide.
Secure Server