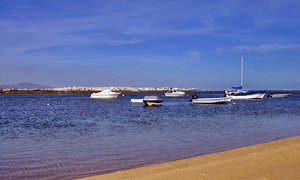 In the heart of the historic district, on the picturesque Largo da Se square there is the main symbol of the city - the old cathedral. It was built in the 13th century, but was badly damaged during the invasion of the British. Through the efforts of local residents shrine was fully restored; the last large-scale reconstruction of the cathedral took place in the late 18th century. It is a unique monument of architecture and the epitome of unparalleled Gothic and Renaissance traditions.
Cuisine of Faro for gourmet with top restaurants and cafe
Faro is famous for abundance of attractive unique restaurants; among them travelers point out the national restaurant Tasca. The main feature of this place is a huge selection of local …

Open
There is a curious religious structure in the modern city. It is famous Capela dos Ossos. In the 17th century, the chapel was located on the site of a beautiful baroque church, which was partially rebuilt and extended with new facilities. The name of the chapel fully reflects its main feature, as its walls are entirely covered with human skulls and skeletons of people who were brought to the local churchyard. The chapel should remind visitors of the impermanence of all things with its design.
The Bishop's Palace is a true architectural masterpiece. It was built in the late 16th century. It is a place where unique theological works and old books are stored, and all attenders can see those priceless tomes. In 1596, the palace was looted by British pirates that managed to steal about two hundred books. They are now stored in the library of the University of Oxford. However, the collection of the Bishop's Palace is still considered one of the most interesting and richest in the world. Copyright www.orangesmile.com
Your active city break in Faro. Attractions, recreation and entertainment - best places to spend your day and night here
The resort won’t disappoint fans of beach holidays and shopping, sporting activities and colorful parties. A perfect holiday destination will be the beautiful beach of Praia de Faro …

Open
Saying about religious and architectural attractions, it’s worth to mention the Church of St. Francis. Built in the 18th century, it was made in the best traditions of the Baroque style. The church features luxurious interior. The St. Peter's Church founded in the late Middle Ages would be interesting too. Saint Peter is the patron saint of sailors and fishermen. The first church founded in his honor has appeared on that site more than seven hundred years ago. The Museum of Henry the Navigator is of great interest to tourists, as its walls house the priceless collection of archaeological artifacts. Among the many exhibits there are finds dated back to the Roman Empire.

In the section below, you can get one of our excursion, activities or city discovery tours over Faro and surroundings. Our website offers 10-30% lower ticket prices, when compared to the offline purchase on the spot.

City tours, excursions and tickets in Faro and surroundings

This guide to cultural sights Faro is protected by the copyright law. You can re-publish this content with mandatory attribution: direct and active hyperlink to www.orangesmile.com.
Faro - guide chapters 1 2 3 4 5

What to visit during two-day excursion in Faro

The city of Aveiro is regarded as the Portuguese Venice. It will delight tourists with a Jesuit monastery built in the 15th century, as well as an ancient Cathedral. For a complete immersion in the atmosphere of the city, it is recommended to book a trip through the canals on a boat – Moliceiro.  … Open

Photogallery of cultural heritage of Faro

Excursions over cultural sights of neighbours of Faro

Vilamoura
Another great attraction is Praia de Vilamoura. The beach is well maintained, and the walk promises to be memorable. In addition, the beach is very extensive, due to which it doesn't seem overcrowded. Around there are bars and restaurants where you can have a glass or two of a hot drink. If there's no free space left on the above-mentioned beach, head to Praia da Rocha ... Open »
Albufeira
Cathedral of St. Anne is definitely the most striking architectural landmark of the city. The cathedral was built in the beginning of the 18th century. The main religious attribute of the church’s chapel is a huge wooden altar, which is decorated with intricate carvings and paintings. According to one version, two prominent masters of that time - João Batista and Francis ... Open »
Isla Canela
Connoisseurs of sacral landmarks will definitely enjoy a visit to Iglesia de Nuestra Senora de las Angustias. The church has a gorgeous design that makes it a true architectural landmark. Inner premises are no less amazing and strike visitors with their beauty and grandeur. Many tourists mention that the church is incredibly spacious and has a calm and trouble-free ... Open »
Portimao
People who love to visit interesting historical places will be interested in visiting of Armaco-de-Pera, where the small stronghold is kept. It was built in the middle of 18th century and protected important commercial districts from pirates, at the present time this stronghold is opened for visiting. People who like to walk on foot usually like Carvoeiro a bit more. In spite ... Open »
Lagos
The Regional Museum invites visitors to get acquainted with the history of the city and see the priceless works of art. Its main advantage is a collection of old boats; one of the halls of the museum is dedicated to the pictures of 17th-18th centuries. Another bright feature of Lagos is an abundance of beautiful churches and cathedrals. One should visit the church of St. ... Open »
Cadiz
A stroll or a ride on Puente de la Constitucion de 1812 is another mesmerizing activity in Cadiz. The area is incredibly attractive, and its relatively young age makes an interesting combination with the surrounding historic buildings. The futuristic bridge looks a bit odd, but that doesn’t spoil the city’s look. Tourists who like to take strolls to picturesque places ... Open »

Culture guide to Faro. Which fascinating sights to visit once you are in Faro: temples, churches, museums, theaters and castles. Recommendations (with addresses, phone numbers and links) on the places 'must visit' in Faro. Plan your own city excursion by using this page info!