«« BEGINNING - PART I
Video of flights over top monuments of Bucharest in HD format.
Use 'Full Screen' mode.
In this article, dedicated to the architecture of Bucharest, we will 'fly' over such iconic historical monuments as Palace of the Parliament, CEC Palace, Arcul de Triumf, and Romanian Athenaeum. In addition to the virtual flight video, we offer the most important and interesting facts about every landmark, including high-quality photographs. You can also use this article to make your own excursion tour in Bucharest. Simply use the icon

to locate the object of interest on the map of Bucharest.

Palace of the Parliament, Bucharest 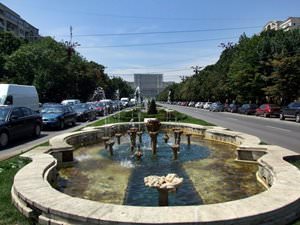 Facts:
» The Palace of the Parliament was built at the time of the Socialist Republic of Romania. It is one of the most famous architectural monument in Bucharest.
»  The Palace is considered as the biggest civil and administrative building in the world and the largest parliament building.
»  The total area of the Palace is 270x240 m. The building is 86 m high. The underground part of the Palace is at a depth of 92 m.
»  In the building, there are 1 100 rooms on 12 floors.
»  It consists of 8 underground levels, 4 of which have been already finished and used. 4 floors are being finalized.
»  During the construction of the Palace, there was a need for Romanian marble, due to which one-fifth of the historic center of the city was dismantled. At one time, this triggered protests because a lot of churches were demolished. 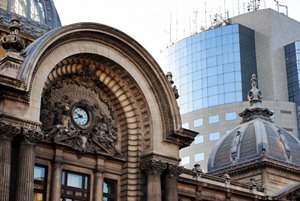 Facts:
» The CEC Palace is one of the most beautiful buildings in Bucharest. It was built in 1885 as the headquarter of the oldest bank in Romania.
»  106 years later, it was decided to sell the palace to the City Municipality because it was no longer suitable for providing modern banking services. The City Municipality was going to use the building as a museum.
»  Despite the fact that the bank does not provide its services, it is still renting the building and using it as a headquarter and offices, as there is no appropriate replacement.
»  In 2009, the sixtieth birthday of Princess Margarita of Romania was celebrated in the Palace.
»  The building is designed in an eclectic style. The Palace is crowned by a beautiful glass and metal dome. The building entrance is decorated with an arch supported by two pairs of columns. 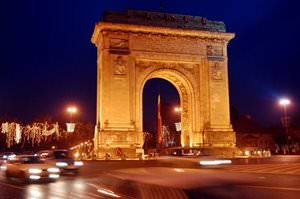 Facts:
» The Arcul de Triumf was officially opened on October 16, 1922. However, the arch had been constructed until the fall of 1936.
»  The Arcul de Triumf became the symbol of national unity of the Romanian people.
»  The arch from a ledge to a pediment is 27 m high. The foundation of the arch is over 300 m2. The span is 10 m wide and 17 m high.
»  On the arch, you can see engraved texts of great Romanian historian Nicolae Iorga.
»  Every year on December 1, a parade in honor of the Unity Day is held at the foot of the arch. 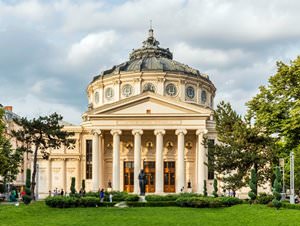 Facts:
» The Romanian Athenaeum is one of the most beautiful buildings in Bucharest. It is the home of the Romanian Philharmonic with a famous hall and incomparable acoustics.
»  The building was built by famous French architect Albert Galleron. He also designed the building of the National Bank of Romania.
»  The Athenaeum resembles a Greek temple. The high dome and columns are Doric. There is an incredibly beautiful lobby where the ceiling is decorated with inimitable frescoes and leaves covered with pure gold.
»  If you go up the spiral stairs, you will reach elegant balconies decorated with curved trellis.
»  The dome of the building is supported by beautiful columns of pink marble. They are linked with sophisticated arches. On the walls, there are copper lanterns that resemble gems with their shape.

This guide to architecture monuments in Bucharest is protected by the copyright law. You can re-publish this content with mandatory attribution: direct and active hyperlink to www.orangesmile.com.
Bucharest - guide chapters 1 2 3 4 5 6 7 8 9 10 11 12 13 14 15

Plan your own tour over Bucharest on the monuments map

Search for architecture monuments of Bucharest on the map

Tours through neighbours of Bucharest

Sofia
The St. Alexander Nevsky Cathedral is a cathedral dedicated to Russian soldiers who freed Bulgaria of the Turkish yoke. The cathedral was built by patriots of Bessarabia, Dobrudzha, Austria, and Russia. In 1882, the first stone was laid. The construction lasted from 1904 to 1912. It had been named after Saint Cyrill and Methodius until 1920. The cathedral was declared a cultural monument only in 1924. The building was designed by Russian ... Open »
Istanbul
Sultan Ahmed Mosque is the largest and one of the most beautiful mosques of Istanbul. The name ‘Blue Mosque’ it owes to a huge variety of blue and white ceramic tiles used in interior decoration. Construction of the mosque has being carried out for 7 years and was completed in 1616. The most unusual part of the Blue Mosque is a niche for prayers carved from a huge piece of marble with a black stone, which was brought here from Mecca. The ... Open »
Thessaloniki
The White Tower is located on a waterfront. It has a museum now. There are multimedia exhibitions with illustrations and sound design. There used to be an outpost here. It dated back to the 12th century. Later, Turks fortified the building for it to protect the harbor. The Ottoman rulers dealt with undesirables here. Kuli Blanka resembles a cylinder, is 34 meters high and 23 meters in diameter. Having studied the history of ... Open »
Sarajevo
The Cathedral of the Nativity of the Blessed Virgin Mary was constructed in 1863 on the petition of the Orthodox Community that asked the government of the Ottoman Empire for building the House of God. The sultan donated 556 gold coins to the construction of the temple. Merchants of Sarajevo paid the missing amount. The Russian Government gifted church utensils, theological books, robes for churchmen, and icons. The best artists were ... Open »
Lviv
The theatre was designed by a European architect. He managed the construction that started in 1897. The architectural complex is located on the avenue along the river. For the first time, concrete blocks were used as the basis for a future building. The construction lasted 36 months. Money was allocated from the city budget, but citizens donated some amount as well. The building was ventilated, heated, and electrified. ... Open »
OrangeSmile.com - online travel reservation expert providing reliable car rental and hotel booking services. We feature more than 25.000 destinations with 12.000 rental offices and 200.000 hotels worldwide.
Secure Server