«« BEGINNING - PART I
Video of flights over top monuments of Istanbul in HD format.
Use 'Full Screen' mode.
Sultan Ahmed Mosque, Topkapi Palace, Eyup Sultan Mosque, Dolmabahce Palace, Grand Bazaar, Beylerbeyi Palace, and Yavuz Selim Mosque are the main candidates that compete for the title of the major architectural symbol of Istanbul. Just like in the first part of the guide, you can watch each monument by viewing its colorful 3D model in the Istanbul flyover video on the left. Don’t forget to access our photo gallery and an overview of interesting facts regarding every monument. The map of the most important architecture sights of Istanbul (located below this guide) will help you to create your own sightseeing tour through Istanbul. 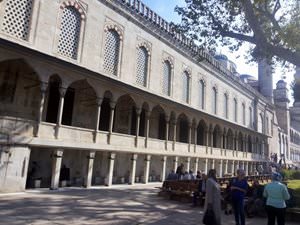 Facts:
» Sultan Ahmed Mosque is the largest and one of the most beautiful mosques of Istanbul. The name ‘Blue Mosque’ it owes to a huge variety of blue and white ceramic tiles used in interior decoration.
» Construction of the mosque has being carried out for 7 years and was completed in 1616.
» The most unusual part of the Blue Mosque is a niche for prayers carved from a huge piece of marble with a black stone, which was brought here from Mecca.
» The mosque has a separate entrance for the Sultan, who came here on a horse. Before the entrance there was a low-strained chain for the passage, so he had to bend down. Thus, he gave praise to God and demonstrated the insignificance of the Sultan before the Almighty.
» When construction of the Blue Mosque was completed, it was found that the most sacred mosque in Islamic world, Masjid al-Haram in Mecca, was caught up in the number of minarets (there were six of them) by Sultan Ahmed Mosque. It was treated as sacrilege, so it was decided to attach another minaret to the Masjid al-Haram to make it to surpass all existing facilities once again. 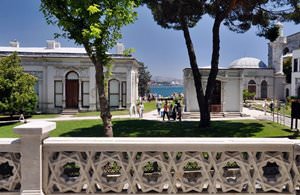 Facts:
» Topkapi Palace can be considered the whole city located on the territory of Istanbul, because the total area of the palace is more than 700 thousand square meters, and the length is about 5 kilometers.
» Topkapi Palace houses a vast collection of treasures including jewelry, costumes, weapons and sacred artifacts. Major exhibits include cape and sword of the Prophet Mohammed and his collection of porcelain, which is the third most important in the world.
» The fifth largest diamond in the world, which is set in silver and surrounded by 49 smaller diamonds, is kept in the Treasury of the Palace.
» One of the main attractions of the Palace, Harem, is a protected and prohibited place. Only people, which were very close to the Sultan, including his family, wives, concubines, eunuchs and servants had access there. Entrance to the Harem was strictly forbidden to outsiders; all inside was run by the mother of the Sultan.
» The Palace has being the official residence of the Ottoman Sultans for almost 400 years. 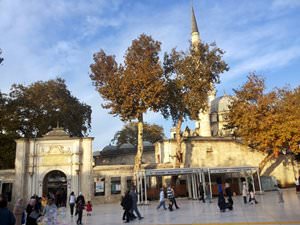 Facts:
» Eyup Sultan Mosque is built on the place of burial of the standard-bearer of the Prophet Muhammad, Eyup Ansari, who was killed at the siege of Constantinople.
» There is a tradition concerning the throne succession. According to it, the future ruler certainly must visit Eyup Sultan Mosque, where he will wear the legendary blade once belonged to the founder of the dynasty of Osman Gazi and, only then, he will be declared the ruler of the Muslims.
» Today, the holy Muslim relics are carefully preserved inside the mausoleum; the footprint of the Prophet Muhammad stands among them.
» It’s simply impossible not to notice shadyrvan, the ritual ablutions fountain, at the entrance of the mosque. It’s intended for the girdling the sword ceremony.
» The mosque was often subjected to destruction and reconstruction. The most devastating was an earthquake of 1766. Sultan Selim the Third decided to demolish the almost destroyed mosque and rebuild it anew. 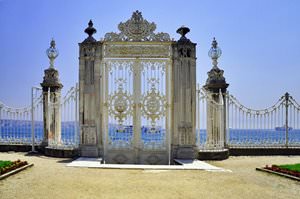 Facts:
» Ceilings and walls of Dolmabahce are decorated with hundreds of kilograms of gold. Interior chambers are decorated with antique French furniture. The palace has the room completely made of crystal. The bath here is of marble and carpets of silk.
» All clocks in Dolmabahce Palace show 9.05 am. This time is a time of death of Mustafa Kemal Ataturk (Ottoman and Turkish reformer). He died there November 10, 1938.
» The name of the palace translates as ‘filled garden’.
»  The ceiling of the main hall of Dolmabahce is decorated with the chandelier weighting four and a half tons. It was a gift of Queen Victoria.
» Dolmabahce Palace is adorned with paintings of the Russian artist Ivan Aivazovsky. Sultan Abdul Hamid II ordered about 40 works depicting the Bosphorus, the sea, and views of the city. The artist received the highest Turkish award, Osmani order, decorated with diamonds. 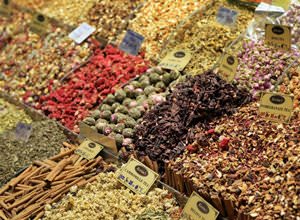 Facts:
» One of the largest covered markets in the world, Grand Bazaar, is situated in the old part of Istanbul. It covers a huge area, which is 30,700 square meters. There are more than 4,000 shops in 66 street of the market.
» Until the mid-19th century Grand Bazaar was the center of the slave trade.
» The labyrinth of the Grand Bazaar has everything, including ceramics, gold, silver, jewelry, shawls, scarves, charms, carpets, kilims and much more.
» The number of visitors reaches half a million a day.
» You can bargain there, like at any other bazaar. Initial price will certainly cause a shock in unexperienced buyers, but you shouldn’t hesitate to bargain, as this situation is observed in many places. So if the owner of the shop sees that person is really interested in a certain product, he probably will lower the price. 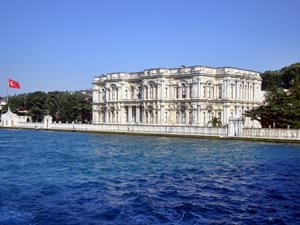 Facts:
» Beylerbeyi Palace was built in 1861 as a summer residence and a place to entertain heads of state. Translated from the Turkish, its name means ‘Lord of lords’.
» Beylerbeyi Palace was visited by famous rulers as Nasreddin Shah of Persia, the Russian Prince Nicholay, the Duke of Windsor. French Empress Eugenie was so delighted with the splendor of the palace, that she ordered an exact copy of windows for her bedroom in the Tuileries in Paris.
» There are 26 rooms and three floors in Beylerbeyi Palace. It’s divided into separate sections for men and women, including the harem.
» The wooden base of Beylerbeyi palace was partially destroyed by fire. After a while, the new sultan ordered to destroy the old structure completely and build a new palace.
» Floor of Beylerbeyi is covered with reeds specially brought from Egypt. In winter it has to protect from moisture and humidity, and from heat in summer.

Facts: » Yavuz Selim Mosque is the Ottoman imperial mosque built in honor of the Ottoman sultan Yavuz Selim.
» The mosque is located at the top of the fifth city hill. Its terrace offers a magnificent view of the Golden Horn.
» Dimensions and geographic location of the mosque make it an important place and a landmark of Istanbul.
» Yavuz Selim Mosque is the second oldest imperial mosque in Istanbul.
» The shrine was built by Sultan Suleiman the Magnificent in memory of his father, Selim, who died in 1520.

Plan your own tour over Istanbul on the monuments map

Search for architecture monuments of Istanbul on the map

Tours through neighbours of Istanbul

Bucharest
The Palace of the Parliament was built at the time of the Socialist Republic of Romania. It is one of the most famous architectural monument in Bucharest. The Palace is considered as the biggest civil and administrative building in the world and the largest parliament building. The total area of the Palace is 270x240 m. The building is 86 m high. The underground part of the Palace is at a depth of 92 m. In the building, there are 1 100 ... Open »
Sofia
The St. Alexander Nevsky Cathedral is a cathedral dedicated to Russian soldiers who freed Bulgaria of the Turkish yoke. The cathedral was built by patriots of Bessarabia, Dobrudzha, Austria, and Russia. In 1882, the first stone was laid. The construction lasted from 1904 to 1912. It had been named after Saint Cyrill and Methodius until 1920. The cathedral was declared a cultural monument only in 1924. The building was designed by Russian ... Open »
Thessaloniki
The White Tower is located on a waterfront. It has a museum now. There are multimedia exhibitions with illustrations and sound design. There used to be an outpost here. It dated back to the 12th century. Later, Turks fortified the building for it to protect the harbor. The Ottoman rulers dealt with undesirables here. Kuli Blanka resembles a cylinder, is 34 meters high and 23 meters in diameter. Having studied the history of ... Open »
Athens
Parthenon is the main temple in the ancient city of Athens, which was dedicated to the patroness of the city, the goddess Athena. The Parthenon is located in the Athenian Acropolis. The temple was built in the years 447-438 BC. Today the temple is in dilapidated condition, but there is ongoing restoration work. Although the temple seems perfectly square-cut, there are almost no straight lines in its contour, and the columns of the temple ... Open »
Sarajevo
The Cathedral of the Nativity of the Blessed Virgin Mary was constructed in 1863 on the petition of the Orthodox Community that asked the government of the Ottoman Empire for building the House of God. The sultan donated 556 gold coins to the construction of the temple. Merchants of Sarajevo paid the missing amount. The Russian Government gifted church utensils, theological books, robes for churchmen, and icons. The best artists were ... Open »
OrangeSmile.com - online travel reservation expert providing reliable car rental and hotel booking services. We feature more than 25.000 destinations with 12.000 rental offices and 200.000 hotels worldwide.
Secure Server