Sightseeing in Cluj-Napoca - what to see. Complete travel guide 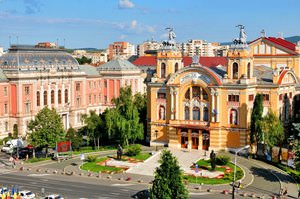 Cluj-Napoca is one of the oldest cities in Romania. This fabulous settlement is situated in the central part of Transylvania. In modern times, Romanians make up the majority of the city’s population but Cluj-Napoca was mostly a non-Romanian city in the past. Cluj-Napoca is quite big in size; nevertheless, this is a charming and cozy city. Having arrived here, you will feel how the atmosphere of antiquity skillfully intertwines with the atmosphere of a modern economic center. The city is famous for its university. The Babeș-Bolyai University is the largest in the country. Local nightlife deserves a separate mention because there are many nightclubs here.
Initially, the city had another name – Napoca. This is the name that local Dacian tribes gave to the settlement. Emperor Trajan approved of that name and established a base for the Roman legion in the area. The region got the same name. In the 70s of the 12th century, this settlement changed its name to Castrum Clus. When Transylvania became a part of the Hungarian kingdom, the city changed its name once again, this time to Kolozsvár. The name was changing continuously until it became Cluj. The settlement got the town status in 1270. For a long time, Hungarian rulers were the main power in the region. Romania returned the city only in 1918.
Hungarians continued living in Cluj-Napoca until the start of World War II. Only during the reign of Nicolae Ceaușescu, Cluj returned its original name, changing it to Cluj-Napoca. At the end of the 20th century, Cluj-Napoca started developing actively, turning into an important cultural and economic center of the country. Nowadays, this is a charming and cozy city with a developing economy. Its large cultural heritage attracts a large number of foreign guests. Copyright www.orangesmile.com
Start your acquaintance with Cluj-Napoca with a visit to the St. Michael's Church. This is a beautiful Gothic-style Roman Catholic church. The shrine is the second-largest church in Transylvania. The St. Michael's Church was erected in 1390. Despite such an honorable age, the church is in good condition and never ceases to amaze and excite its numerous guests. The church’s nave is fifty meters long and twenty-four meters wide. The highest point of the church – its spire – is eighty meters tall. From the top of the tower, visitors can enjoy a remarkable view of Cluj-Napoca and its surroundings. 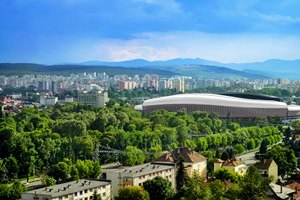 Many prominent personalities visited this church during its long history. Many great Princes of Transylvania were elected in the Church of Saint Michael. Queen Isabella gave the Hungarian crown to Ferdinand I here. During an excursion in this church, take a look at the altar that has been here since the 14th century. The altar is still in great condition. Nowadays, the city is proud of its main attraction because of its rich cultural heritage.
What is so good about Cluj-Napoca? Without a doubt, numerous landmarks of great historical value make this city an interesting destination. The Matthias Corvinus Monument, which immortalized the King of Hungary and his four generals, is one of the must-visit landmarks in Cluj-Napoca. Tourists can find it in the central square of the city. As many locals and frequents guests of the city say, “Visiting Cluj-Napoca and failing to see the Matthias Corvinus Monument means that you haven’t seen the city at all”. 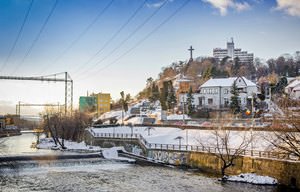 The opening of the prominent monument took place at the beginning of the 20th century. The monument features King Matthias Corvinus on his horse. At the base of the pedestal, there are the king’s generals who hold the flags proudly. All the statues are made from bronze, and the pedestal is made from marble.
Do you like electronic music? In this case, don’t forget to visit the Musical Instrument Digital Interface – Midi Club. This is a wonderful venue to spend an evening in and to listen to favorite music in great quality because the club’s crew pays much attention to the quality of its audio systems. Both musicians and visitors enjoy their work and time spent in this club. Visual effects deserve a separate mention. Numerous lights and a sophisticated illumination system create beautiful visual images that fit different songs. The result is harmonious and attractive. 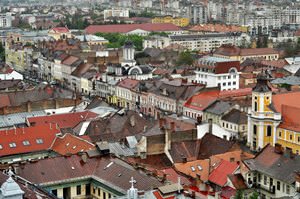 There is an airport not far from the central part of Cluj-Napoca. It accommodates flights from the capital of Romania, the city of Bucharest, as well as flights from Paris, London, Vienna, and Budapest. The flight lasts approximately one hour. There are no direct flights to Cluj-Napoca from many countries in the world. Upon your arrival at the airport of Cluj-Napoca, take a bus to the city center. The ride lasts approximately half an hour. If you want to reach the central part of the city faster, you can always get a taxi.
This guide to iconic landmarks and sights of Cluj-Napoca is protected by the copyright law. You can re-publish this content with mandatory attribution: direct and active hyperlink to www.orangesmile.com.

City tours, excursions and tickets in Cluj-Napoca and surroundings

Shopping streets in Cluj-Napoca
♥   Shopping area ' Bulevardul Eroilor' Cluj-Napoca, 2.2 km from the center. On the map

Survived castles around Cluj-Napoca
♥   Castle 'Bonuida Bánffy Castle' , 21 km from the center. On the map

National and city parks around Cluj-Napoca
♥   Natural park 'Muntii Apuseni' , 55.7 km from the center. On the map

Sights around Cluj-Napoca from our guide 'Extreme places on Earth' 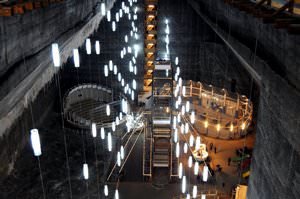 Distance from Cluj-Napoca center - 23.9 km.
If a walk through the narrow tunnels with fantastic landscapes didn’t cause adrenaline rush, then you can try the local Ferris wheel, strolling through the swinging bridges or riding the panoramic lift. It’s not accidental that this amazing salt cave attracts thousands of tourists. The fact is that its air is saturated with vapors of salt and that’s very good for health, so many tourists and locals visit the complex not only for thrill, but also to improve their general state. … Read further

Search touristic sites on the map of Cluj-Napoca

Sightseeing in regions nearby Cluj-Napoca

Oradea
Above the main altar, there is an image of Saint Ladislaus. There is a scene that depicts the meeting of the saint and bishop of Oradea, during which King Ladislaus gives the keys to the city. The painting is a symbol of God’s acceptance of the church and his permit to the bishop to manage it. The chapel’s cupolas deserve a separate mention. They feature different scenes ... Open »
Debrecen
Among the multiple local sights and place of interest we should mention the largest Reformed Church in Hungary and the reformed college organized nearby, Deri Museum (exhibits large collection of ethnographic and archeological items and pictures), the Calvinist Library with stock exceeding 300 thousand books including rare incunabula, and much more. There is a magnificent ... Open »
Brasov
On the territory of the modern town you will find several museums that are definitely worth visiting as they exhibit a collection of quite interesting artifacts. Guests of this town are also often offered to visit the oldest Romanian school, make an excursion to the Black Church, where they can listen to hypnotic sounds of organ music, and then try delicious food in the local ... Open »
Timisoara
Rose Park is considered one of the most romantic places in the city. This place is particularly beautiful during warm months of the year. Here visitors will find several hundred varieties of roses. In summertime the park simply dives the wonderful aroma that emit several millions of flowers. Diversify your walks through the picturesque parks and sightseeing with visits to ... Open »
Chernivtsi
It has long attracted many travelers. The resort is attractive for tourists from Europe because of its close proximity to Romania. It is popular with fans of excursions and hiking. The guests come here for interesting attractions and favorable weather conditions that are perfect for active holidays. Chernivtsi has another attractive feature, affordable prices. You can rent an ... Open »
Miskolc
Do you enjoy visiting theaters while on a holiday? In this case, here is an interesting fact for you – Miskolc has always been a “theatre region”. This city is home to a big State Theater opened in 1856. Nowadays, the theater building is one of the main attractions of Miskolc. Its stages regularly host different interesting plays and performances. Visitors can see both ... Open »

All about Cluj-Napoca, Romania - sightseeings, attractions, touristic spots, architecture, history, culture and cuisine. Prepare your trip together with OrangeSmile.com - find out the 'must see' things in Cluj-Napoca, which places to visit, which excursions to take, where the breathtaking views are waiting for you. Planning your trip with this travel guide will help your to get the most out of Cluj-Napoca in few days.