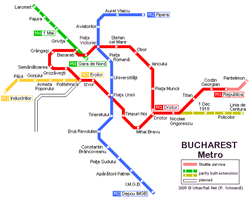 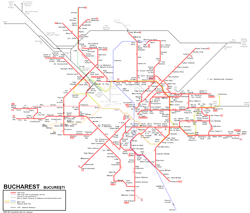 Interactive maps of hiking and biking routes around Bucharest

1. You can zoom in/out using your mouse wheel, as well as move the map of Bucharest with your mouse.
2. This interactive map presents two modes: 'Biking Routes' and 'Hiking Routes'. Use the '+' button on the map to switch between them.

This Bucharest map has two modes: 'Railway Network' and 'Landscape & Rural Map'. Use the '+' button on the map to navigate.

Romania - moving around the country

To travel between cities in Romania, it is best to choose the railway system. However, its quality is also not up to international standards. The country has four types of trains, each of which has both the first and second class. Passenger trains run across the country, but very slowly. Train tickets are cheap, but the trains themselves are very dirty and crowded. Fast trains travel long distances, move faster, but the quality of service within the train remains the same. In winter, these trains are not even heated. Express trains of class Rapid move fast enough, but the quality of the wagons in this case is much higher. Between the cities there are so-called InterCity trains, considered the fastest and most comfortable. Thus, it is best to reserve seats for trains in advance, especially if a night trip is foreseen. … Open

Nature and parks of Romania

The high Carpathian Mountains that pass through the whole country are the main, but not the only, pride of Romania. Rocks, mountain serpentines and cool coniferous forests are full of ancient legends, wild animals and national parks along which tourists and locals take leisure walks. The mountains constitute a part of the Alpine folded mountains, and the highest ridges reach 2,544 meters (the Moldoveanu peak). One of the most memorable places is the Iron Gate, a natural narrowing of the ridge, with a panoramic view from the top. Since ancient times Carpathian Mountains have become a part of mysterious stories and legends, most of which have survived to this present day, enveloping the whole country with the mysterious fleur and the unquenchable interest of tourists. An example of this is the legend of Vlad Dracula regularly attracting crowds of tourists to the southern country. … Open

Our guide to Bucharest

Traditions and mentality of Bucharest

Despite the fact that many people do not connect the image of the Roma people with high intelligence and morality, the Romanian gypsies are very different from the Roma living in other European countries. They devote a lot more time to studying, but art is still the main passion of gypsies. During the day of the holiday visitors can always listen to performance of the internationally famous Gipsy Orchestra «Fanfare … Open

One of the most beautiful religious monuments in Budapest is the St. Stephen basilica. The construction of this basilica began in the first half of the 19th century, and was consecrated only in 1905. The height of the beautiful church in the Neo-Gothic style is 96 meters. The main religious artifact is considered to be the walls of the basilica of the relics of St. Stephen. One of the most interesting and … Open

Hotel Casa Capsa invites travelers to spend a few days in a fascinating historic building. Its guests have the opportunity to plunge into the refined atmosphere of the past centuries. Its rooms and public areas are designed with the use of exclusive antique furniture. Within the hotel walls, there is a popular old confectionery where specialty sweets have been prepared according to unchanged recipes for over a … Open

Bucharest for children - what to visit

Rainbow Accommodation is ready to offer its clients a decent selection of exclusively designed rooms and suites. Some of its rooms are decorated in elegant black-and-white shades, while others have a romantic design in pink and lilac. Fans of a stylish setting will be surprised by the suites with a bathroom painted in rich light green color, and romantic natures appreciate rooms in dark shades equipped with … Open

Urbanesc can safely be called one of the most original shops in the city. It is located in a chic old villa. This historic building houses a popular national restaurant and some shopping pavilions. It is a really good place to purchase unusual designer handmade jewelry. Budget customers will be able to choose colorful T-shirts, and a beautiful playground awaits young visitors. In the old industrial building of … Open