Sightseeing in Iasi - what to see. Complete travel guide 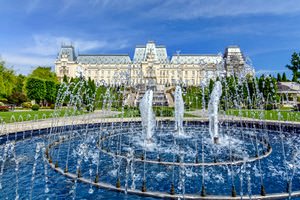 Iasi (also known as Jassy or Iassy) is one of the oldest cities in Romania. This settlement is situated in the Moldavian Plateau and its seven hills. The area is famous for its fertile soil along the Jijia River. When describing this region back in the past, people often used the name “Small Rome”. Modern Iasi is a symbol of a responsible settlement that successfully develops without getting rid of its architectural landmarks and maintains its antique atmosphere. Besides interesting landmarks, this city has magnificent nature with scenic views. Wine connoisseurs praise Romanian wine for its unusual taste and strong flavor.
Archaeological excavations in the neighborhoods of Iasi proved that the Thracian and Sarmatian tribes lived in this region. During the Roman Empire period, the Romans traded with the Dacians. The building of a royal palace started in this settlement in the 14th century. Until that period, there was an Armenian church in Iasi. It was the first shrine in the area. The first mentions of Iasi date back to 1408. Prince Alexandru IV Lăpușneanu moved the Moldavian capital to Iasi at the end of the 16th century. This made the city the religious center of the country.
Many famous historians and chroniclers lived and worked in Iasi for decades starting from the beginning of the 17th century. Such famous personalities as Grigore Ureche, Miron Costin, and Ion Neculce wrote their works here. Iasi is also famous as the place where Russia and Turkey signed a peace treaty in the 90s of the 18th century. In accordance with this document, the sides ended the war that had started in 1787. When it was decided to move the capital to another Romanian city, Iasi didn’t lose its importance. It remained a major center of culture and economy. Copyright www.orangesmile.com
The Palace of Culture is a beautiful landmark of Iasi. This is an eye-catching neo-gothic building. Currently, the building is recognized as an important landmark protected by the government. The palace was finished in 1925. Initially, this was a court building, but soldiers lived in it during World War II. Only ten years after the end of the war, the palace was transformed into a museum. This museum is still open in the building. 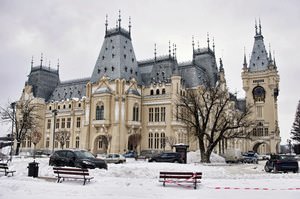 By visiting the museum in the Palace of Culture, tourists can learn many interesting facts about the history of the Romanian region and see many artworks that Iasi is proud of. The Gheorghe Asachi Library occupies the eastern wing of the palace. Moreover, visitors can see how professionals save precious artifacts in the local center of conservation and restoration that is also open in the same building. Tourists enjoy visiting this place in order to see one of the largest museums in Romania with their own eyes and admire its monumental gothic architecture.
When heading from the Palace of Culture to Stefan cel Mare Boulevard, tourists will surely notice the big and beautiful Trei Ierarhi Monastery. This gorgeous church is a true architectural masterpiece. All walls of the shrine are covered with skillful decorations, and its inner décor is elegant and luxurious at the same time. As all inner walls and the ceiling have gilded ornaments, the building looks truly fabulous and even chic. Many prominent personalities have found their last resort here. Among them are Vasile Lupu, a Voivode of Moldavia, and famous Demetrius Cantemir, whose ashes were brought to the church in the 30s of the 20th century. 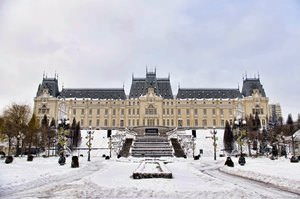 It would be a mistake to visit Iasi and fail to attend the Copou Park, a popular local landmark. As local people say, a failure to visit this park is similar to staying in Paris and failing to see the Eiffel Tower. The green oasis in the heart of the Roman city was established in the 30s of the 20th century. Today, the park had many notable attractions and Eminescu's Linden Tree is one of them. The famous poet wrote many of his prominent works under this old tree. It was a kind of a muse of the great poet.
In modern days, the linden tree has become one of the city’s symbols. In order to immortalize the poet, there is a bust of Mihai Eminescu not far from the tree. In the 80s of the 20th century, a museum dedicated to the life and work of the great Romanian poet opened its doors in the park. Visit this museum if you want to get acquainted with the genius works of Eminescu. The park hides one more important landmark – the Obelisk of Lions dedicated to the Law of Organic Rules. 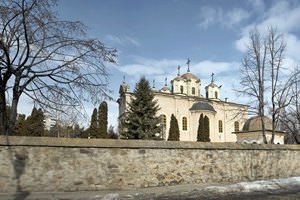 How can tourists get to Iasi? Nowadays, tourists can travel directly to Iasi by trains coming from numerous European cities such as Sofia, Moscow, Chisinau, Bucharest, Varna, Saratov, Dnepr, Lviv, Kyiv, and Burgas. Taking into consideration that the railway station is situated in the city center, the ride will be comfortable and fast.
This guide to iconic landmarks and sights of Iasi is protected by the copyright law. You can re-publish this content with mandatory attribution: direct and active hyperlink to www.orangesmile.com.

City tours, excursions and tickets in Iasi and surroundings

Survived castles around Iasi
♥   Castle 'Foiuor Castle' , 80.8 km from the center. On the map

Art galleries in Iasi and around
♥   Art museum 'Art Museum' Iaşi, 1.1 km from the center. On the map

There are several dozen fortresses and castles in the territory of modern Romania. Bran Castle is worth closest attention because numerous legends about Count Dracula are connected with this castle. In the beginning of the 15th century the castle was an important strategic facility. Bran Castle was built exclusively with the money got as donations from locals. To thank for the donations, the locals were exempt from taxes. Nowadays, halls of the castle are decorated with beautiful old furniture and other items that are considered precious museum artifacts. Several halls were dedicated for the exhibition of the Museum of History and Medieval Art. Here visitors are able to see collections of wonderful paintings, tapestries and sculptures. Several villages, which are located not far away from Bran, are also an interesting place worth visiting as travellers can buy traditional Romanian cheese and beautiful items made of wool there. … Open

Search touristic sites on the map of Iasi

Sightseeing in regions nearby Iasi

Chisinau
Probably, Organ Hall and National Drama Theater located opposite to it are main cultural sights of the city. Between these sights is located Great National Gathering Square – the biggest and most beautiful square in Chisinau. Victory Square is located in the center of the city. This square is built in honor of a famous commander Kutuzov who has defeated Turkish troops. A ... Open »
Tiraspol
The guests from distant cities and countries are attracted by the inimitable atmosphere of the city and its wonderful nature. The Dniester Valley has long been an attractive place for fans of ecotourism. There is just no better place for hiking and recreation. Many attractive natural sites are located in the immediate surroundings of Tiraspol. In the lively city streets, there ... Open »
Chernivtsi
The city is perfect for travelers with children. There are many beautiful places for family recreation, affordable restaurants and very interesting entertainment centers. The picturesque resort will also impress adherents of the food tourism. In the city, there are many restaurants of the Austrian, Romanian, Ukrainian, and Russian cuisine. Those who choose a national ... Open »
Brasov
On the territory of the modern town you will find several museums that are definitely worth visiting as they exhibit a collection of quite interesting artifacts. Guests of this town are also often offered to visit the oldest Romanian school, make an excursion to the Black Church, where they can listen to hypnotic sounds of organ music, and then try delicious food in the local ... Open »
Vinnytsya
At the end of the XVIII century Vinnitsa experienced one of the most difficult historical periods. More than 1500 of its inhabitants died of plague. Soon the territory of the city passed under the rule of the Russian Empire, and in 1810 about 10 thousand inhabitants already lived in Vinnitsa. In the shortest time, several educational institutions, a hospital, a theater and ... Open »
Odessa
Odessa Opera and Ballet Theatre is considered one of the greatest cultural monuments. Once here were performing Tchaikovsky, Chaliapin and Sobinov. Attending this theater is a dream of theater connoisseur. The most unusual house of Odessa can be found in the Vorontsov Street. This is a building of a triangular shape, which seems to be absolutely flat from some angles. This is ... Open »

All about Iasi, Romania - sightseeings, attractions, touristic spots, architecture, history, culture and cuisine. Prepare your trip together with OrangeSmile.com - find out the 'must see' things in Iasi, which places to visit, which excursions to take, where the breathtaking views are waiting for you. Planning your trip with this travel guide will help your to get the most out of Iasi in few days.