Sightseeing in Oradea - what to see. Complete travel guide 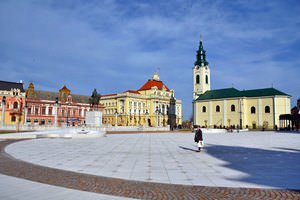 Oradea is a Romanian city that is situated close to the border with Hungary. This is an interesting settlement with rich architectural and cultural heritage. When taking a stroll in the historic city center, it is easy to notice that the majority of dwellings here are built in the Baroque style. This architectural style was typical for the Austro-Hungarian Empire. Oradea changes its look closer to the outskirts. Buildings of the communist era are the most widespread in this part of the city. The facades of many residential buildings are painted in different colors – pink, green, white, and blue. This fact makes every building original and creates a fairytale look. Finally, there are more than a hundred of different shrines in the Romanian city.
Initially, modern Oradea had another name of Latin etymology – Varadinum. The first mention of this settlement dates back to 1113. A fortress, which gave the town its name, was built in the area at that time. The main purpose of the stronghold was to protect the region from the Mongol Tatar invasion. The fortress is mentioned in the documents for the first time in 1241. Oradea officially became a town only in the 16th century. The area started developing actively and growing in size.
At the beginning of the 18th century, Franz Anton Hillebrandt, an architect from Vienna, was given the task of changing the look of Oradea. The idea was to add the Baroque style buildings to the settlement. The building works reached its peak in 1752 when the majority of the city’s landmarks were completed. Fascists occupied Oradea during World War II. The German invaders remained in the Roman city until 1944. On October 12, the USSR’s 2nd Ukrainian Army defeated the fascists and made them leave the city. Copyright www.orangesmile.com
The Сathedral Basilica of St. Mary is one of the main religious landmarks in Oradea. This fabulous church was built by the project of Italian architect Giovanni Ricca. When he died, the Viennese architect Franz Anton Hillebrandt continued his work. This cathedral has a distinctive feature – all of its walls have a marble cover. Inside the church, there is a bronze statue of Saint Ladislaus. The height of the building is roughly sixty-five meters. The cathedral has a length of forty-eight and a width of thirty meters. The shrine occupies as an area of almost one thousand and five hundred square meters. This is the most majestic religious landmark in Bihor County. 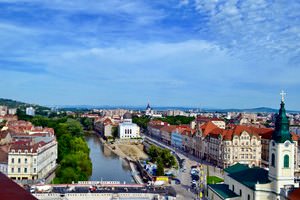 Would you like to visit a true cultural pride of Oradea? For this purpose, visit the local theater that is a gorgeous building with three stores. Initially, the theater was built with the purpose of providing space for one thousand viewers. The main entrance to the building looks impressive. This is one of the major architectural landmarks of Oradea. The entrance features two statues of Comedy and Tragedy. Outside, the theater is an interesting combination of several architectural styles, such as the neoclassical style, which is the dominating in the design of the theater, neo-Renaissance, and neo-Baroque. The inner décor and ornaments have definite Rococo influences.
The project of the Oradea Theater features three levels. The first level is represented by a hall for viewers, the second is the place of the loge, and the balcony is the third level. When developing the theatre’s project, much attention was paid to the acoustic properties of the building. It was important to place the orchestra pit in a way that would make the sound great at all levels. The result of the hard work is, indeed, amazing. Oradea got an excellent theater for dramatic performances, legendary operas, and even concerts of symphonic music. Nowadays, the capacity of the theater was increased to six hundred and seventy seats. 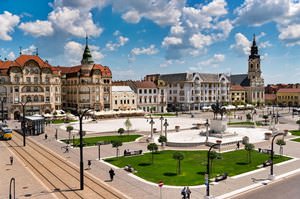 The St. Ladislaus Roman Catholic Chapel is one of the oldest shrines in Oradea. The construction of the chapel started in 1720. Thirty-six years later, the bishop of Oradea consecrated the church. Since that time, local people have considered it a holy place protected by God. That is why the chapel is always crowded on holidays and weekends.
Above the main altar, there is an image of Saint Ladislaus. There is a scene that depicts the meeting of the saint and bishop of Oradea, during which King Ladislaus gives the keys to the city. The painting is a symbol of God’s acceptance of the church and his permit to the bishop to manage it. The chapel’s cupolas deserve a separate mention. They feature different scenes from the life of King Ladislaus. 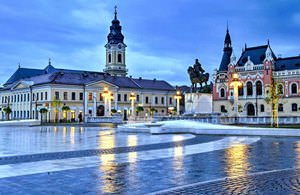 If you decide to visit the Romanian city of Oradea, you will most likely have to make a connecting flight. The most comfortable route lies through Bucharest, the capital of the country. Having landed in the central city of Romania, tourists need to take a domestic flight directly to Oradea. The total journey time from Bucharest to Oradea is one hour.
This guide to iconic landmarks and sights of Oradea is protected by the copyright law. You can re-publish this content with mandatory attribution: direct and active hyperlink to www.orangesmile.com.

City tours, excursions and tickets in Oradea and surroundings

Shopping streets in Oradea
♥   Shopping area ' Calea Republicii' Oradea, 1.7 km from the center. On the map

Survived castles around Oradea
♥   Castle 'Episcopal palace' Oradea, 2.6 km from the center. On the map

National and city parks around Oradea
♥   Natural park 'Parcul Natural Cefa' , 25.6 km from the center. On the map

Search touristic sites on the map of Oradea

Sightseeing in regions nearby Oradea

Debrecen
Among the multiple local sights and place of interest we should mention the largest Reformed Church in Hungary and the reformed college organized nearby, Deri Museum (exhibits large collection of ethnographic and archeological items and pictures), the Calvinist Library with stock exceeding 300 thousand books including rare incunabula, and much more. There is a magnificent ... Open »
Cluj-Napoca
Many prominent personalities visited this church during its long history. Many great Princes of Transylvania were elected in the Church of Saint Michael. Queen Isabella gave the Hungarian crown to Ferdinand I here. During an excursion in this church, take a look at the altar that has been here since the 14th century. The altar is still in great condition. Nowadays, the city ... Open »
Miskolc
In one of these halls, there is a collection of medieval weapons used during sieges and in battles. Another exhibition of the museum is dedicated to a collection of items discovered during the numerous archaeological excavations, which frequently took place in modern Miskolc. Visit the other two halls to learn more about the lifestyle and traditions of people who lived in the ... Open »
Eger
Nowadays, there is a museum in the Castle of Eger. The venue is named after Istvan Dobo. Visit this museum to find out more about the rich history of the magnificent castle. The mint is the main pride of this historical landmark, and every visitor has a unique opportunity to try to make a coin. Do you like archery? In this case, don’t forget to visit the shooting gallery ... Open »
Timisoara
Start your observation of the city from a visit to the central square named Unirii. The square is surrounded by amazingly beautiful medieval buildings. Catholic Cathedral is surely the main decoration of the square. This cathedral was built in the beginning of the 18th century. Its magnificent design in the Baroque style perfectly reflects best traditions of medieval ... Open »
Kecskemet
It is easy to get to Kecskemet by train that goes from Budapest to Szeged. The ride lasts approximately one hour. There are also daily buses that connect Kecskemet with other parts of the country. A bus ride is almost as fast as a train one. Needless to say, taxi drivers are always ready to get you to the right destination. This is the fastest but also the most expensive way ... Open »

All about Oradea, Romania - sightseeings, attractions, touristic spots, architecture, history, culture and cuisine. Prepare your trip together with OrangeSmile.com - find out the 'must see' things in Oradea, which places to visit, which excursions to take, where the breathtaking views are waiting for you. Planning your trip with this travel guide will help your to get the most out of Oradea in few days.