Sightseeing in Timisoara - what to see. Complete travel guide 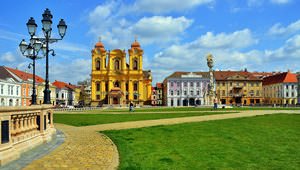 One of the oldest and most picturesque cities of the country, Timisoara was founded in the beginning of the 13th century. The city is named after the river Timis, on the banks of which have appeared first settlements. Some people call this city "a little Vienna" because of the large number of old buildings in the Baroque style. Expressive architecture, rich history and excellent infrastructure make Timisoara truly attractive to travelers.
Your active city break in Timisoara. Attractions, recreation and entertainment - best places to spend your day and night here
Timisoara doesn’t feature noisy entertainment venues and night clubs; however, it provides tourists a decent selection of leisure activities. The charming Roses Park garden is perfect …

Open
Start your observation of the city from a visit to the central square named Unirii. The square is surrounded by amazingly beautiful medieval buildings. Catholic Cathedral is surely the main decoration of the square. This cathedral was built in the beginning of the 18th century. Its magnificent design in the Baroque style perfectly reflects best traditions of medieval architecture. The local Orthodox Church is located just near the cathedral. Here visitors can see a fine collection of icons. The best example of Gothic architecture is, without a doubt, Hunyad Castle, which is built on a hill. The castle was constructed in the 15th century. For many years it remained the residence of the governor Iancu de Hunedoara. In 1854 the castle was badly damaged by fire, but later it was restored. Nowadays the halls of the castle store the collection of Museum of the Banat Province. This is the oldest museum in Romania. Here you will find collections of historical artifacts and art objects. Some halls of the museum are devoted to natural history and ethnography.
Rose Park is considered one of the most romantic places in the city. This place is particularly beautiful during warm months of the year. Here visitors will find several hundred varieties of roses. In summertime the park simply dives the wonderful aroma that emit several millions of flowers. Diversify your walks through the picturesque parks and sightseeing with visits to local restaurants, where you will be offered to try traditional Romanian dishes. Tourists are also attracted by colorful markets and new shopping centers are located near the center of the city. Copyright www.orangesmile.com
Advices to travellers: what you should know while being in Timisoara
1. Fans of excursions are recommended to explore city on foot, as all important tourist sites and entertainment venues are located within walking distance of each other. Those who come to …

Open
Bishop's Palace is an outstanding architectural monument. Its construction began in 1745. During its existence, the building has maintained its luxurious interior design. A large bas-relief is one of its main decorations. Inside the palace is a rich collection of religious artifacts. In 1967 it was first opened to the public. 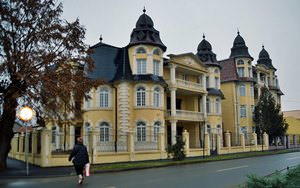 One of the oldest buildings, that managed to survive in the city, is the Church of St. Catherine. In the 13th century, the spouse of King Robert of Anjou, Mary-Catherine by name, was buried on the grounds of the church. The church was named after her. Initially, the building was constructed in the best traditions of Baroque style. After numerous renovations, it acquired the unique features of neoclassicism.
Cuisine of Timisoara for gourmet with top restaurants and cafe
Timisoara is ready to offer its guests a wide range of dining places; a number of popular restaurants and cafes deserve attention of gourmets. In a beautiful building with a cream facade …

Open
The building of the old synagogue, which construction took place in the second half of the 19th century, is of great historical value nowadays. The building is pretty significant in size. Its appearance is an amazing combination of eclectic and Moorish architectural styles. The hall on the first floor is so big that it can accommodate up to 3000 people at once. Presently, a part of the building is occupied by the Philharmonic, several halls are allocated to exhibitions and conferences. 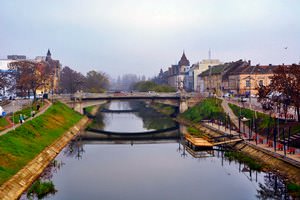 Timisoara Art Museum is popular with admirers of painting. Its unique collection began to emerge in 1879. Originally, unique art masterpieces were donated by city collectors and art historians. Today, the museum's collection includes more than 8500 art canvases. Since the museum's collection grew literally every year, the museum changed buildings repeatedly. Since 1947, it occupies the castle of Hunyadi.
Excursion over cultural sights of Timisoara - 'must visit' points of interest
First mentions about the city date back to the early 13th century. At that time a Roman fortress was situated on that territory. In the Middle Ages it was conquered by the Turks and remained …

Open
The Weiss Palace, built in 1912, is a bright architectural monument of the early 20th century. At the beginning of the 20th century, the Weiss family used to be one of the wealthiest in the city. Its members were major industrialists, doctors, and entrepreneurs. Currently, the historical palace is privately owned. Only a few rooms located on the first floor are open to the public. They are occupied by various commercial institutions nowadays.

This guide to iconic landmarks and sights of Timisoara is protected by the copyright law. You can re-publish this content with mandatory attribution: direct and active hyperlink to www.orangesmile.com.
Timisoara - guide chapters 1 2 3 4 5

City tours, excursions and tickets in Timisoara and surroundings

Survived castles around Timisoara
♥   Castle 'Huniade Castle' , 0.4 km from the center. On the map

National and city parks around Timisoara
♥   Natural park 'Lunca Muresului' , 45.6 km from the center. On the map

Art galleries in Timisoara and around
♥   Art museum 'Timisoara Art Museum' Timişoara, 0.9 km from the center. On the map

Sights around Timisoara from our guide 'Extreme places on Earth' 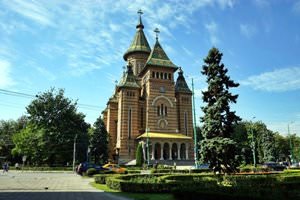 Distance from Timisoara center - 0.3 km.
The wonderful cathedral is a most visited sightseeing in Timisoara. In the cellar was opened an interesting museum, where was placed a rich collection of medieval art pieces and manuscripts of the 16th century. The cathedral has a nice square. In the warm period of time, it is decorated with interesting landscape compositions. The cathedral is very beautiful even in the evening. At night it is decorated with wonderful art lightning. … Read further

Search touristic sites on the map of Timisoara

Sightseeing in regions nearby Timisoara

Novi Sad
To learn more about the history and art of Serbia, visit the hall with roughly seven thousand national artworks. In the opinion of many international art experts, the collection exhibited in the Museum of Vojvodina is the richest in the country. Don’t forget to take a look at the precious gravures of the eighteenth, nineteenth, and twentieth centuries. The historical hall ... Open »
Oradea
At the beginning of the 18th century, Franz Anton Hillebrandt, an architect from Vienna, was given the task of changing the look of Oradea. The idea was to add the Baroque style buildings to the settlement. The building works reached its peak in 1752 when the majority of the city’s landmarks were completed. Fascists occupied Oradea during World War II. The German invaders ... Open »
Kecskemet
There are three exhibitions in total. The first one is dedicated to works of such painters as Odon Marffy, Mihály Munkácsy, and Bertalan Székely. There are eighty-one paintings in this exhibition. The second one features works by Mednyánszky, Egri, and Anna. Finally, the third exhibition is dedicated to the masterpieces of talented painter Menyhért Tóth. It is easy ... Open »
Osijek
Narrow streets will lead you to the beautiful park located on the bank of the Drva River. On the territory of the park you will see a pedestrian bridge that allows moving from one bank to another. The Cathedral of St Peter and Paul is one of the main religious attractions. Its construction was completed in 1900; this is a beautiful building in the late Gothic style, and the ... Open »
Debrecen
Among the multiple local sights and place of interest we should mention the largest Reformed Church in Hungary and the reformed college organized nearby, Deri Museum (exhibits large collection of ethnographic and archeological items and pictures), the Calvinist Library with stock exceeding 300 thousand books including rare incunabula, and much more. There is a magnificent ... Open »
Cluj-Napoca
Hungarians continued living in Cluj-Napoca until the start of World War II. Only during the reign of Nicolae Ceaușescu, Cluj returned its original name, changing it to Cluj-Napoca. At the end of the 20th century, Cluj-Napoca started developing actively, turning into an important cultural and economic center of the country. Nowadays, this is a charming and cozy city with a ... Open »

All about Timisoara, Romania - sightseeings, attractions, touristic spots, architecture, history, culture and cuisine. Prepare your trip together with OrangeSmile.com - find out the 'must see' things in Timisoara, which places to visit, which excursions to take, where the breathtaking views are waiting for you. Planning your trip with this travel guide will help your to get the most out of Timisoara in few days.