Preparing your trip to Bucharest: advices & hints - things to do and to obey

1. Smokers should pay attention to prohibiting signs that do not allow smoking in certain areas. As a rule, there are special areas for smoking near all large institutions. Cafes and restaurants usually provide rooms for smokers and for non-smoking guests.
2. Make sure to ask for permission when you plan to make a photo or video while visiting the city's attractions. In some ancient palaces and churches making photos and videos is allowed at an additional cost. However you cannot make photos of strategically important objects (bridges, subway stations and the port area).
3. Local stores and markets usually accept euro in addition to the national currency. If you want to exchange currency, the best place to do it is in a state-owned bank. As a rule, such banks offer the most favorable exchange rates and charge a minimal fee.
4. Romanian wine remains one of the most popular souvenirs. You can easily purchase wine in numerous stores and wine cellars. If you don’t know what sort of wine to choose, you should pay attention to Cotnari and Odobesti, which are produced in the oldest vineyards in Bucharest according to classic recipes.
5. Tips are not officially accepted in local restaurants and bars, you visitors are always free to reward an obliging waiter. The usual size of tips is 5 - 7% of the total bill. Leaving a monetary reward to taxi drivers is also not accepted. You can only round up the total amount in a big way. Copyright www.orangesmile.com
6. Local artisans produce fine tableware and home decorations made of glass and clay. Products made of wool and tablecloths decorated with embroidery are also popular souvenirs.
7. The city is distinguished by a well-developed public transport system. Buses can easily get you to all places of interest in the city. You can also use them to make an excursion to the nearby towns. Underground is a very convenient way to travel around the city. You will need special tickets for travel that can be purchased in kiosks at each stop.
Authentic traditions, festivals and lifestyle of Bucharest inhabitants
Participating in national celebrations is the best way to get acquainted with national traditions and customs of Bucharest. Because of a wide choice of interesting celebrations Bucharest is …

Open
8. Tourists, who plan to use taxi a lot, should not forget to find out the cost of the trip in advance. The taxis marked with the letters "PO" and "P" are the most expensive ones. They belong to private companies.
9. Drivers should remember that riding through the streets of the city during the daytime is very difficult. There are heavy traffic jams at peak hours and finding a suitable place to park is almost impossible.
10. Local drivers are not distinguished by strict following of traffic rules, so both drivers of cars and pedestrians should be always careful on the roads of the city.

What to visit being in Bucharest - unique sights 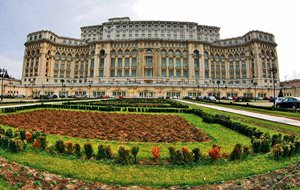 Distance from Bucharest center - 1.3 km.
The chic palace is distinguished not only by its huge scale but also by its rich design. More than a million cubic meters of beautiful marble were used for its decoration. About 3,500 tons of crystal were also used for the decoration of the building. All the chandeliers in the huge building are made of crystal. There are about 1,400 ceiling lamps in the palace alone. Also, you can see many elements of decoration made of bronze and precious wood in the palace. Wool carpets are a special decoration. … Read further

Romanians express willingness to show hospitality by kissing guests on both cheeks.
Usually, residents of large cities have a good command of English while residents of small settlements mainly express themselves in Hungarian.
Photographing of strategic attractions such as military structures, airfields, and transport bridges are strictly prohibited.
As in most European countries, smoking and drinking alcohol outside the designated areas is prohibited in Romania. The police in the country have extensive powers – so you are expected to live within the confines of the laws and regulation to avoid getting into any trouble. … Open

Tips for the cities around Bucharest

Brasov
2. The best way to exchange currency is to use special exchange offices. As a rule, they offer much more favorable rates comparing to many banks. It should be noted that the exchange offices located near the airport usually charge high fees, making exchange less profitable. 3. While going for a walk around the city, tourists should not forget to take a copy of the identity ... Open »
Varna
2. Make sure you have enough of the national currency when you plan to visit local markets and shops. You can often pay by euros and U.S. dollars, but they are usually accepted at very disadvantageous rates. 3. Currency may be exchanged in banks and specialized exchange offices. Extra attention should be paid to the amount of commission charged. As a rule, the smaller the ... Open »
Golden Sands
2. Tourists who plan to travel across the territory of the country and visit neighboring towns are recommended to use rail transport. This is the fastest and most convenient way to get to suburban areas of Golden Sands. When buying tickets, tourists are recommended to purchase two-way tickets. In this case their savings can estimate up to 30% of the total cost. 3. Smoking ... Open »
Constanta
2. In addition to comfortable hotels, there are mass sanatoriums and resorts, some of which have become world famous. Don’t limit yourself solely by the hotels; resorts often offer tours at very attractive prices. 3. Tipping is customary to virtually all institutions, whether it would be a restaurant, hotel or beauty salon. Usually tip of 10% of total is quite enough. When ... Open »
Sunny Beach
2. Fans of beach vacations are recommended to visit the resort in summer or at the beginning of September. The fact is that in July and August in case of the warm weather the coast is always full of jellyfish, which make staying on the beach pretty uncomfortable. 3. Holiday-makers should take into account that the whole beach area is divided into two areas, paid and free ... Open »
Nessebar
2. Banks and other governmental institutions start working from 8:30 and serve customers till 15:00 – 16:00. The premises of all bank departments and large shopping centers are equipped with cash machines operating 24/7. Before any cash withdrawal one should specify the fee charged for any withdrawal as some ATM features rather high fees. 3. The best season for visiting ... Open »

Travelling to Bucharest - advices and tips. What should be provisioned in advance, the rules you might want to follow, and the things you better avoid doing in Bucharest. We help you to make your trip smooth and easy, with no unexpected surprises.