Video of flights over top monuments of London in HD format.
Use 'Full Screen' mode.
The landmarks of London are not limited to the presented 7 architectural sights. A curious traveler will find thousands of exciting places here. However, below we present the most impressive and striking architectural sights of London, which should be noted at first - Westminster Palace, Tower of London, St Paul Cathedral, National Gallery, 30 St Mary Axe and many others. In this unusual virtual tour, you will see the photos and read the facts on each monument. But, most importantly, you will be able to fly over each landmark, and to see the whole architectural ensemble of London in 3D format from the sky. 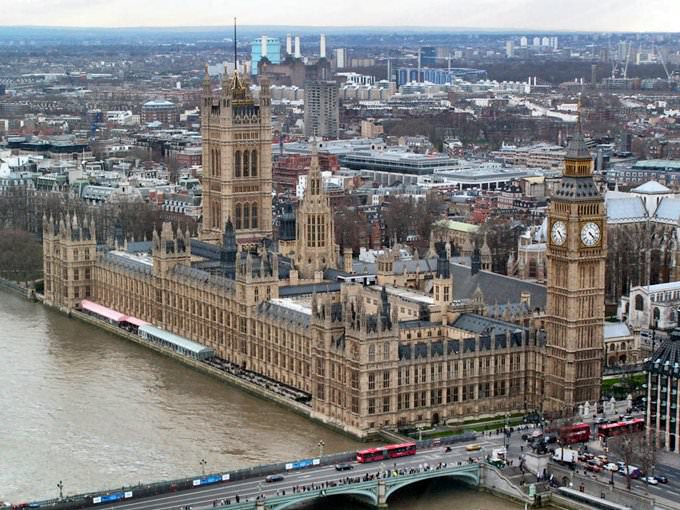 Facts:
» The building of Westminster Palace, called The Parliament, is one of the largest buildings in the world. That’s the palace of 1200 rooms, 5 kilometers of corridors, and 100 stairways.
» The most famous among palace’s towers is often referred to as Big Ben. In fact that’s the tower of St. Stephen's, and Big Ben is the name of the bell that was specially cast for the tower.
» The highest tower of the palace is the Victoria Tower, its height is 102 meters. Tower, named after Victoria, was designed so tall with only one purpose - to fit the archive of documents considered by the Parliament of England.
» Westminster Hall is the oldest building of the palace; it covers an area of 1,800 square meters. Its height is 28 meters.
» Westminster Palace is open to visitors only a few weeks a year. Guests can enjoy an informative 70-minute tour throughout September. 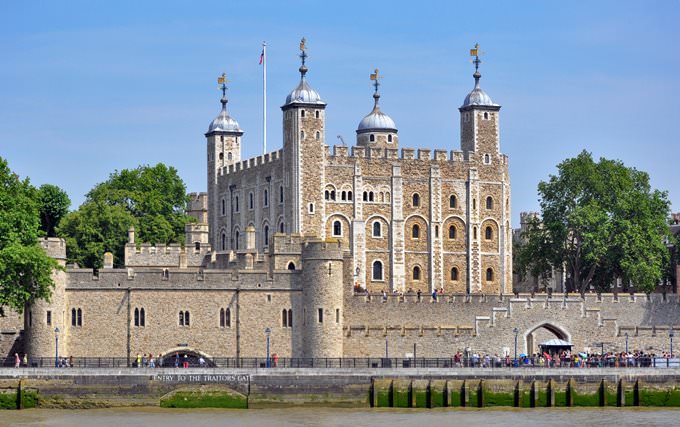 Facts:
» Tower of London has served as a fortress for nine centuries; it was the residence of the kings, the armory and the treasury, as well as a prison and a place of execution.
» The Tower held prisoners mostly of noble birth.
» Today Tower is preferably a landmark. In addition to the buildings, its exposition includes the British Crown Jewels, a fine collection of weapons from the Royal armories and the wall of the Roman fortress.
»  The special hallmark of the Tower is abundance of ravens. There is an old belief that once the ravens leave the Tower, the White Tower and the whole kingdom would collapse.
» The important element of the Tower of London is the staff of the fortress; its members are called Yeoman Warder, which guard the Tower till these days. Today, their duties also include excursions for numerous visitors. 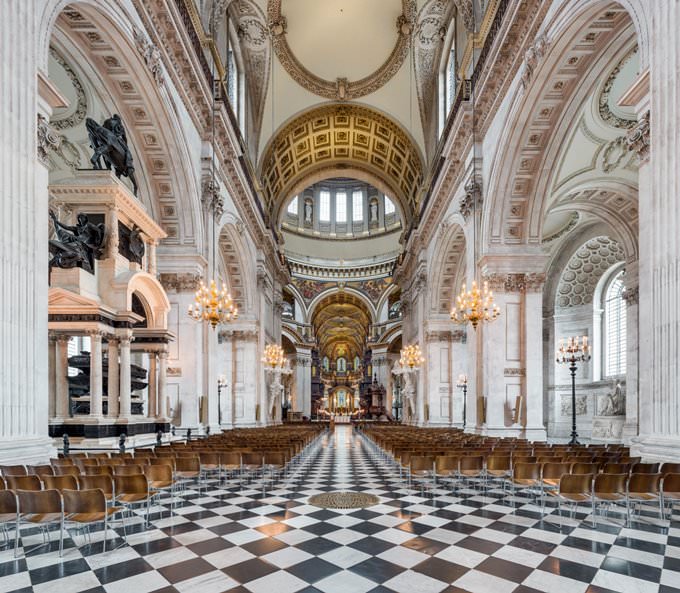 Facts:
» The architectural plan of St. Paul Cathedral looks like an elongated cross. Total height from the floor to the tip of the cross is 111 meters, and weight is more than 65 thousand tons.
» The Cathedral has its own acoustic hallmark, the whispering gallery. It’s said that the whispered word in one end of the gallery can be heard at the other end, in a few tens of meters.
» The St. Paul Cathedral is known by the burial of Admiral Nelson and many other famous personalities. The wedding of Prince Charles and Diana was held there.
» At the tomb of the architect Christopher Wren instead of the monument there is a plate with the inscription that can be translated from Latin as ‘Reader, if you seek a monument, just look around.’
» Visitors of the cathedral should be aware that there is an entrance fee and it would be necessary to walk a lot. There are several floors with lots of stairs; the top floor provides spectacular view of London. 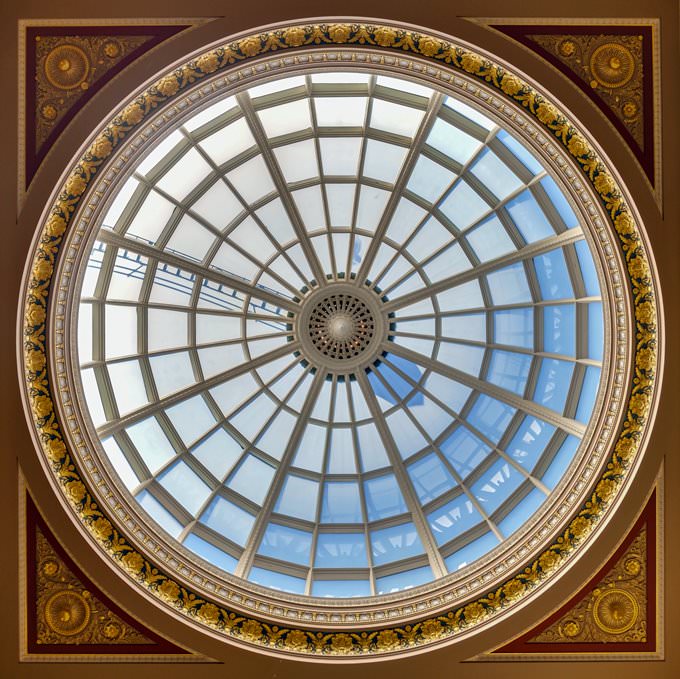 Facts:
» National Gallery in London exhibits about 2,300 paintings, representing the European art from the mid-13th to the early 20th century in chronological order. Here are all the best artists, including Leonardo da Vinci, Botticelli, Van Gogh, Turner, Cezanne and others.
» National Gallery was established in May 1824. Paintings formerly owned by the wealthy banker and a big fan of painting, John Julius Angerstein, have formed the basis of the future major exhibition.
»  In the halls of the gallery you can see a lot of famous paintings, with Titian’s Holy Family, Van Gogh’s Wheatfield with Cypresses and Sunflowers , Venus with a Mirror by Velazquez, Landscape with Castle Walls by Rubens, Michelangelo's The Burial of Christ and Raphael's Madonna among them.
» Rembrandt fans can enjoy an impressive collection of his works, which seem to turn the pages of life's greatest painter.
» Besides a collection of masterpieces, the exhibition is notable for the fact that you can listen to audio to or watch detailed video presentations on the paintings and artists in the Sainsbury wing or in the Espresso bar. 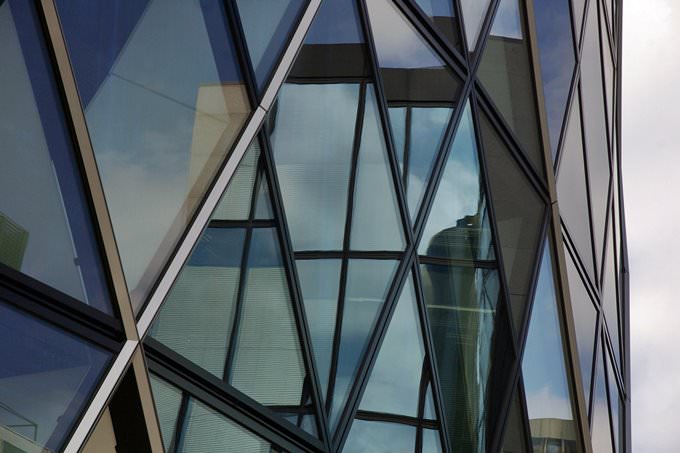 Facts:
» 30st Mary Axe is the first structure in the world, claiming the title of the environmental skyscraper. The lower floors of high-rise buildings are open for access by all visitors, and there are numerous restaurants at the top.
» This high-rise building was designed by world-renowned architect Norman Foster on the former site of the Baltic Exchange, damaged as a result of the terrorist attack of the Irish Republican Army.
» The main task was to implement construction of high-rise project in such a way that the building would fit into realities of the historical area and provide view of the main attractions of central London.
» Londoners call the skyscraper ‘gherkin’ and ‘cucumber’ for its unusual shape and greenish tint of glass.
» That’s the all-glass skyscraper with its top featuring a transparent cover. 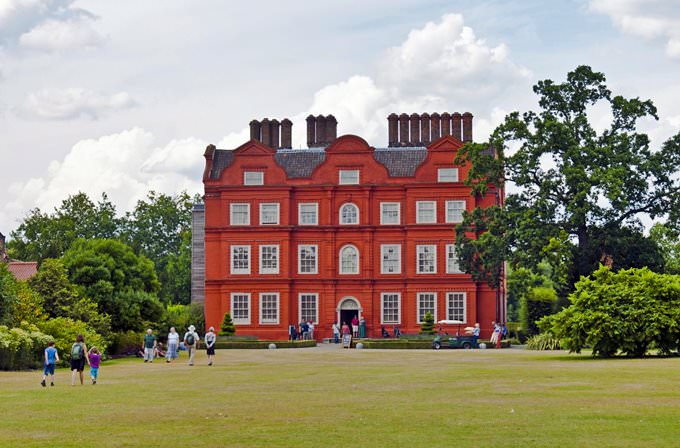 Facts:
» Kew Palace is built of red brick.
» Behind the rear facade of the palace grows a garden of medicinal plants.
» Kew Palace is located on the territory of Kew Gardens, but that’s an independent entity.
» Kew Palace is a modest royal residence.
» In fact, the palace is just a manor.
» Kew Palace was built by the merchant. After the Prince of Wales, who lived here for a while, Botanic Gardens in Kew were laid. Later they were expanded and became world famous.

St Martin in the Fields, London 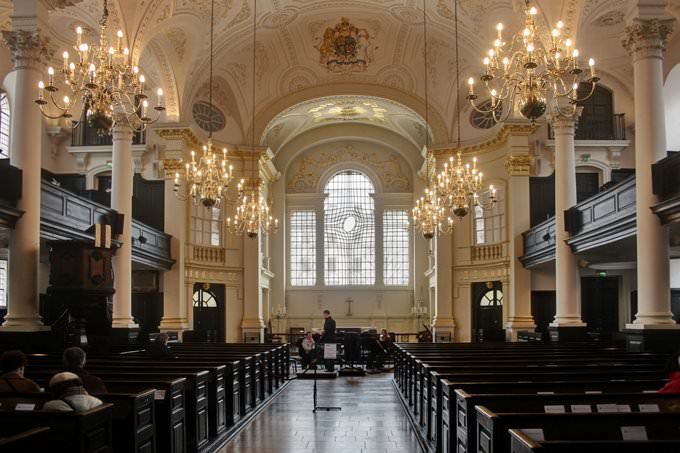 Facts:
» Church of St. Martin in the Fields is the biggest and most famous parish church in London.
» People of different faiths are praying together in that church.
» The main parishioners are members of the royal family. The church has its own orchestra, Academy of St. Martin in the Fields.
» The Church is an ancient temple with a large bell tower, topped with a gold crown.
» The church houses the remains of eminent Englishmen.
» The crypt is equipped with a cafe for the homeless.
» During World War I, the temple was a shelter for homeless men and beggars, and during World War II it was a bomb shelter.

Build your walking routes in London on the landmark map Architectural landmarks in the regions around London