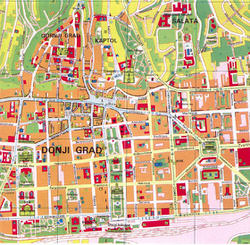 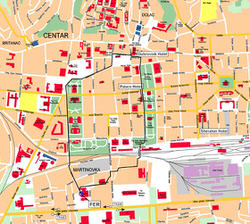 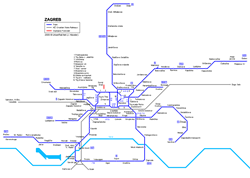 Interactive maps of hiking and biking routes around Zagreb

1. You can zoom in/out using your mouse wheel, as well as move the map of Zagreb with your mouse.
2. This interactive map presents two modes: 'Biking Routes' and 'Hiking Routes'. Use the '+' button on the map to switch between them.

This Zagreb map has two modes: 'Railway Network' and 'Landscape & Rural Map'. Use the '+' button on the map to navigate.

The use of bicycles is pretty much popular in Croatia. You can save considerably by renting them especially since there are special cycling routes in the country. In the absence of bicycle routes, it is also safe to move along motor roads, since Croats have great respect for bicycle riders. Please note that it is possible to travel by plane within the country. Airports can be reached by taxi, by shuttle bus or by bus. In this case, it is worth considering that not every airport terminal is run by city buses. The railway network in the country is not very developed, but it covers the most remote regions. Within the city, you will usually find trains with second class carriages. For longer trips, it is possible to buy a ticket for an express or comfortable first-class train. In which case, it is advisable to buy tickets in advance. … Open

Nature and parks of Croatia

Kornati is another national park located on the archipelago of the same name. The island is very popular among yachtsmen and divers. Its popularity is easily explained by the richest underwater world. The bottom off the coast features the reefs forming fanciful labyrinths. There, you can find corals, pearls and various kinds of fish. Different birds inhabit the shores; gannets, owls, falcons, and buzzards are among them. The island of Mljet in South Dalmatia is also a national park. The first mention of this place can be found in the records of ancient Greek seafarers. There are two picturesque lakes with salt water on the island. In the middle of the Great Lake, there is a small island. A monastery was built there in the 12th century; it has amazingly survived to our days. … Open

Our guide to Zagreb

An important historical place in Zagreb is Capol Square, around which you can see the surviving defensive buildings from the Middle Ages. Around the square there are several ancient towers, as well as part of the fortification wall. The erection of these fortifications began in 1478. Today in the famous historical square, entertaining events are often held for tourists. Another great place to explore the … Open

Zagreb for children - what to visit

Nature lovers and animal lovers should definitely look into the Zagreb Zoo. It is also very popular among holidaymakers with children. The opening of this zoo took place almost a hundred years ago, but it was recently completely re-equipped. Now the animals walk around in new and beautifully designed enclosures. In the zoo, there are many animals brought from different corners of the world, among them quite rare and … Open

A huge choice of footwear offers its customers Morandi store, which is extremely popular with local residents. Croatian footwear is available in it. The store has attractive prices. For a pair of quality light-top shoes, you'll need to pay about 70 - 100 euros. Summer shoes and models from last year's collections can be purchased much cheaper. Near the city cathedral is located Sirok, the city's largest souvenir … Open

2. Do not forget to leave tips in restaurants and cafes of the city. As a rule, the tip of 10% of the total order will be sufficient. Service charges are rarely included in the total bill, so your reward should be given directly to waiter’s hands or you can simply round the due amount in a big way to any convenient sum. 3. Despite the fact that the city is very quiet and is distinguished by … Open

Entertainment complexes in the capital of Croatia have always attracted tourists and locals. Everyone will easily find a suitable venue to fit their taste. Escape quests are particularly popular, and such quests as Fox in a box, Enigmarium, and ExitGames are the best in the capital. Everyone wishing to feel like a thief of art from a Hollywood blockbuster should definitely visit Arena escape room. Fans of carting … Open

Festivals and events in Zagreb

Residents of Zagreb can be relied upon in case or a problem. If someone has a Croatian friend, that person is lucky because Croatians always help their friends, no matter how hard that is. The wellbeing of their “inner circle” is very important to them. At the same time, tourists shouldn’t be afraid to seek help from locals. Zagreb residents will always help tourists and provide them with the necessary … Open