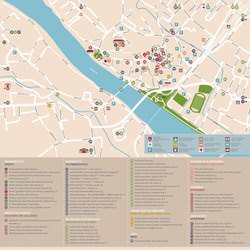 Interactive maps of hiking and biking routes around Ptuj

1. You can zoom in/out using your mouse wheel, as well as move the map of Ptuj with your mouse.
2. This interactive map presents two modes: 'Biking Routes' and 'Hiking Routes'. Use the '+' button on the map to switch between them.

This Ptuj map has two modes: 'Railway Network' and 'Landscape & Rural Map'. Use the '+' button on the map to navigate.

Nature and parks of Slovenia

The only Slovenian national park Triglav is named after the eponymous mountain peak, which became a symbol of the country. The park lying in the northwestern part of the country covers an area of more than 800 square kilometers or 4% of the entire territory of Slovenia. In 1924, the Triglav Lakes Valley was recognized as a protected area. The Triglav Park was formed around it in 1961, and 20 years later it has been completely reorganized. The park located at altitudes of up to 1,400 meters above sea level has a number of resorts: Bohinj, Bled, Kranjska Gora. … Open

Our guide to Ptuj

There is no airport in Ptuj. In order to reach this town, travelers need to fly to one of the nearby cities. The closest sea gate is located twenty-two kilometers from Ptuj, in the city of Maribor. Tourists can get to the old town by train. The journey time is roughly forty minutes. There is also a train route that requires making a change. The journey time is bigger – one and a half hours. Foreign guests can … Open

Maps of Maribor
Local wineries are very popular with connoisseurs of exquisite drinks. You can visit them with an excursion group, as well as alone. One of the most famous and popular wineries is Stara Trta that includes a fantastic cellar and a tasting room. Exactly in the territory of this winery, there is one of the main attractions of Maribor, the Old Vine. After tasting exquisite drinks ... Open »
Maps of Zagreb
Everyone wishing to enjoy nighttime entertainment and have fun in nightclubs will be super excited to visit Zagreb. The capital offers entertainments for any taste. For example, connoisseurs of wine usually visit Bornstein, and beer fans can spend an amazing night at Rock Beer Club Alcatraz. As it is not hard to guess by the name, this venue specializes in rock music. ... Open »
Maps of Graz
Nightlife facilities in the capital of Styria are created exclusively for fun and nothing else. For fans of cultural pastime, there is Hutzi where you can drink wine and watch theatricals. Those wishing to try the best cocktails in town should head to Lookkool, Ernst Fuchs Bar is ideal for fans of old-fashioned interiors, and Kottulinsky is the perfect place to enjoy dancing ... Open »
Maps of Velika Gorica
Raftrek Adventure Park is another great place for all fans of active pastime. One of the most beautiful National Parks in Croatia, Raftrek Adventure Park offers ideal conditions for hiking, cycling, and kayaking. It is a magnificent for all outdoor enthusiasts. Visitors do not need to have experience in trekking, kayaking or rafting because there is a team of skilled ... Open »
Maps of Novo Mesto
On a rainy day, guests of the city can go to one of the entertainment centers or cinemas. The largest and most modern one is Cineplexx. Since Novo Mesto is visited by many foreigners, films in English are shown here regularly. After watching movies, all visitors can relax in a cozy cafe on site. A pleasant surprise awaits fans of elite sports - they can visit Golf Grad Otocec ... Open »
Maps of Ljubljana
Fans of intellectual games will also feel at home in the capital of Slovenia. They are all welcome at Dobra Poteza centers where they can play board games over a mug of beer, not to mention numerous escape room clubs. So, Enigmarium and The Key are considered the best ones, but if you didn't have a chance to book a room here, be sure to check out clubs offering no less ... Open »
OrangeSmile.com - online travel reservation expert providing reliable car rental and hotel booking services. We feature more than 25.000 destinations with 12.000 rental offices and 200.000 hotels worldwide.
Secure Server