Nature of Turkey - national parks and reserves for active recreation 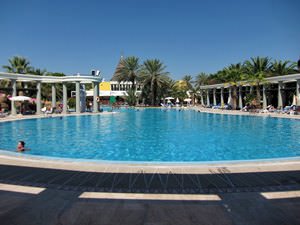 Geographically, the Republic of Turkey is like an ancient bridge between old continents. The Anatolian peninsula is the westernmost protrusion of Asia that is divided from Europe by the Bosphorus and Dardanelles. This Muslim state is a continental country, and the geographic name “Asia Minor” describes it the best. This land is, indeed, like a small continent in many aspects such as climate. In some provinces, the difference in temperatures within 24 hours can reach 15°C.
Most romantic hotels in Turkey
The best hideaways for couples in love, as well as top hotels for wedding and honeymoon.
Read further
This land is also very diverse in terms of populations that inhabited it. Since prehistoric times, many nations settled here. Some were building whole civilizations and some moved deeper into the continents. Consequently, this plot of land was very important from a strategic and geographic point of view. Within the last ten thousand years, more than 20 different nations left their trace in the history of this region. Civilizations appeared and were destroyed; some became victims to invasions of enemies, some died because of epidemics, and some died because of natural disasters such as flood and drought.
The first natural reserve in Turkey was founded 60 years ago. Since that time, the number of reserves in the country has increased substantially. Some areas protected by the government that were initially created for archaeological excavations later turned into areas with rich wildlife and rare flora. For example, Olympos Beydagları Coastal National Park, which is always popular with tourists, is famous for its rare flora and fauna. Köprülü Canyon National Park at the east of the province has become home to unique ancient forests. Natural forests of this type do not grow anywhere else in the world. Besides its unique archaeological and geological treasures, Mugla Dalyan is famous as home to rare species of plants and animals. Copyright www.orangesmile.com
Most original hotels of Turkey
It is hard to impress vacationers in Turkey with unusual or unique hotels. The country has a well-developed hospitality industry, from many budget and …
Read further
The Republic of Turkey is one of the seven countries in the world with the biggest number of thermal springs – Anatolia has almost 1,290 thermal springs scattered in its territory. Of course, the presence of seismic faults makes the landscape of the country very rich in this regard. The warmth of these hot springs fluctuates between 20°C and 110°C, and they produce 4 – 500 liters a second. Turkey uses only a small percent of its mineral spring potential, but nowadays the country’s Ministry of Tourism and private investors try to develop resort tourism of this Muslim gem. 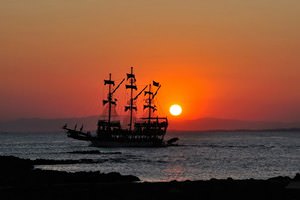 Earthquake in a densely populated area, which leads to numerous deaths and significant damage, can be of the same power as disasters in remote areas that mostly scare wild nature. People often don’t even notice big earthquakes, which take place under the oceans. The north-west of Turkey, a very densely populated part of the country and an important industrial center, was damaged by two massive earthquakes in 1999. On the day of the catastrophe, the local government declared a state of emergency and asked for international help. Low amplitude shocks are not rare in this part of the country.
Admire style in every aspect? Selection of the best design hotels in Turkey
Bays with clear blue water, fabulous 5-star hotels, the coastline of amazing beauty, and thousands of ancient relics – Turkey has all of these. …
Read further
Mountains close to the seaside do not let the influence of the Mediterranean Sea to spread deeper into the continent. This territory has a continental climate with changing seasons. The Anatolian plateau is more prone to extreme weather conditions than coastal regions. Winters are particularly harsh at the plateau. In mountain regions of the east, the temperature can fluctuate from 30°C to -40°C. The snow lasts up to 120 days a year. In the western part of the country, the winter temperature is rarely below -1°C. Summer is usually hot and dry with the temperature of more than 30°C. Annual precipitation is 400mm on average, but it is not the same in different regions of Turkey. Konya plateau and Malatya plateau are the driest regions. 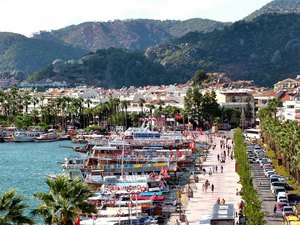 Humanized landscape of Turkey is inseparable from its culture. Even in the most isolated and hard-to-reach parts of the country, foreign tourists can find historic landmarks and ruins of abandoned cities that are now wild and uninhabited. In the past, it was home to ancient civilizations, large villages, and vibrant cities. When walking on an ordinarily looking road, there is always a chance that this road was used by great warriors of the East and West and colorful caravans thousands of years ago. Perhaps, this was the road that Saint Paul or his followers, or Sufis were walking on. There is always a chance that Alexander the Great or King Croesus fought with their enemies on the site where tourists stroll or have fun.

National and city parks of Turkey
♥   World Heritage Site 'Göreme National Park and the Rock Sites of Cappadocia' . On the map

Famous places and sights of Turkey

The Mausoleum at Halicarnassus is the fifth wonder of the world. Its history is closely linked with the history of the temple of Artemis at Ephesus. It was built simultaneously with the second temple of Artemis, which was being rapidly restored after the fire. The building was constructed in an era when Caria was ruled by King Mausolus, so it was named after current ruler. King Mausolus was known for his tough-minded and inflexible nature. During his reign, the city of Halicarnassus was declared the capital of Caria.

Construction of the mausoleum in the capital began long before the ruler's death in 353 BC. Best architects and sculptors of ancient Greece were invited to build and decorate this place. According to available data, several hundred talented artists took part in the … Read all 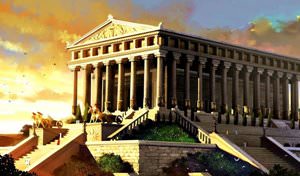 One of the seven wonders of the world has been located in the Greek city of Ephesus thousands of years ago. It was the great temple of Artemis. However, only a few columns and part of the foundation have survived to these days. The prominent landmark can be seen in the small Turkish town of Selcuk, which is located in the southern part of the province of Izmir. The history of the grand building is incredibly complicated and full of tragic events. The first temple in Ephesus was built in the 6th century BC.

Construction lasted less than 300 years. The temple was completely burned by Gyrostat, and then restored. A few years later it was sacked by the Goths. Finally, the temple has been destroyed in the 4th century, and a Christian church was built in its place. The ephesus temple dedicated … Read all
All unique sightseeing Turkey 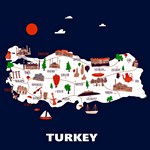 Cultural sights in regions of Turkey

Istanbul
Fans of excursions will find much interesting in visiting Yedikule fortress, which now hosts the exhibition of a museum. The castle was built by Byzantine craftsmen and was long used as a prison. Today in several halls of the fortress you will find collections of antique torture instruments. The museum is open for all guests. The building of beautiful Dolmabahce Palace was completed in 1853. The palace has the right to be considered the most luxurious palace of the city. As many as 14 tons of … Read more

Antalya
Fans of natural attractions will be interested in visiting Karaalioglu Park, which is located not far away from the coastline. Here you can stroll through picturesque tangerine groves and admire the beauty of graceful fountains and sculptures. In the evening the park is a favorite place of dates of couples. This is a romantic and a beautiful place that is always full of harmony and peace. An excursion to the Duden Waterfalls will be a no less interesting and exciting activity. There are special … Read more

Ankara
The mosque of Aladdin is a no less brilliant religious attraction. The construction of the mosque took place yet during the times of the Selcuks. The mosque has a square shape and is not distinguished by particular luxury, but there is something attractive and unique in its unforgettable design. Perhaps, tourists are attracted by the rich history of this ancient building. You can get acquainted with the history of the city and learn a lot about the first settlers of Ankara during the excursion … Read more

Alanya
Kızıl Kule Tower is considered the symbol of Alanya. The tower is located in the port area, and the height of the octagonal construction is 33 meters. Red brick has been used as the main building material during its construction. It should be noted that the name of the building can be literally translated as "Red Tower". The construction of the tower was completed in the middle of the 13th century. Today the tower is the location of Ethnographic Museum. Among the cultural institutions of the … Read more

Kusadasi
Kale is considered the most interesting area for excursions. A walk there would become a real journey into the past. You would see beautiful houses, mosques and colorful bazaars there. It seems that life in these areas hasn’t changed within century; the district looks exactly the same as a few hundred years ago. The most famous natural landmark is located on the Dilek Peninsula - we are talking about the National Park. There are hundreds of tour itineraries on its territory; there is also … Read more

Fethiye
At the top of a steep hill there is incomparable Fethiye Castle, which is associated with many interesting legends. According to one of them, the powerful castle was built by Order of St. John. Locals believe that the impressive fortification is guarded by supreme forces; they treat mysterious symbols carved on the walls as a proof. After admiring the old castle visitors can go to the eastern part of the hill, where there are several ancient tombs too. Fans of the mysterious myths and legends … Read more

Bodrum
Myndos Gates are an important historical object. Many centuries ago the gates served as one of the entrances to the old town. Previously the gates were a part of a powerful fortification; today tourists can see only the ruins of ancient walls that once have protected the city from uninvited guests. The only conqueror, who had managed to overcome this strong fortification, was Alexander of Macedon. According to historical data, after the capturing of the ancient city Alexander ordered to destroy … Read more

Izmir
Bazaar is an interweaving of numerous narrow streets and alleys, the territory of which is fully occupied by various retail stores, craft shops and eating places. Tourists will also find here several old mosques and beautiful national buildings, which were built in the 18th century. It should be noted that all historical buildings of the city are regularly reconstructed, so they look very well. Caravan Bridge is one more interesting historical object. The small bridge over the Melez River was … Read more

Turkey: Map of sightseeing in regions