Sightseeing in Manavgat - what to see. Complete travel guide 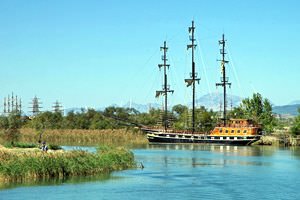 Manavgat is a city located on the coast of the Mediterranean Sea in the delta of the Manavgat River. This place is known for a large number of amazing waterfalls. The city lies at the foot of the gentle slopes of the Taurus Mountains, which are covered with dense forests with amazing small waterfalls hiding among them. You can reach these waterfalls by making a jeep ride.
Your active city break in Manavgat. Attractions, recreation and entertainment - best places to spend your day and night here
The main entertainment for the guests of Manavgat is hiking, where you can admire the main attractions of the city. Manavgat is famous for its unique landscape design, there are attractive …

Open
The north of the city is covered with a pine forest named Sorgun. Together with the water of the delta of the Manavgat River they form an unforgettable landscape named Titreyengol. There is a waterfall in Manavgat in which water that flows down from the mountain slopes has a milky-white color. On both sides of the creek and under the green foliage of the trees are located small cafes, restaurants and souvenir shops. From Manavgat and Side to the east to Konya goes a long beach named Incekum, on which shores is located the oldest Ottoman-style hotel - Club Alibi. The beach is surrounded by the Incekum Park with subtropical vegetation, in which shadow you can relax hiding from the scorching sun.
Not far away from Manavgat is located an ancient city of Seleucia, which lies on the artificially leveled hill in the Pine Wood.

One of the main architectural and religious monuments of the city is the Merkez Külliye Cami Mosque. This is the largest and most beautiful mosque on the coast of Antalya. Its dome is 30 meters high. The height of the minarets of the mosque is 60 meters. They can be seen from many areas of the resort. The beautiful mosque was built recently, in 2004. Now it is surrounded by a picturesque landscape park with slender palms and ornamental plants. Copyright www.orangesmile.com
Advices to travellers: what you should know while being in Manavgat
1. Shoppers in Manavgat can easily pay in dollars and euros, it is not necessary to exchange them to the national currency. It is important to note that local markets accept cash only. …

Open
In 1973, the Sanayi Cami Mosque, also known to many tourists under the unofficial name of the Green Mosque, was built. It is attractive not only for its unique exterior, but also for its luxurious interior. Within its walls, many original elements have been preserved. The walls of the mosque are decorated with fine art paintings with floral ornament, traditional for many mosques. 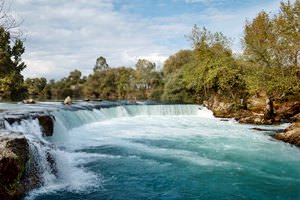 A unique attraction is the Manavgat Fountain. It is considered one of the most beautiful in the region. According to historical data, this fountain was built as far back as 74 AD. in honor of the famous emperor Titus. In memory of the ruler, an inscription, which has survived to our days, was made on the fountain. In addition to the memorable inscription, it managed to preserve the most beautiful ancient bas-reliefs. At present, the fountain is located on the territory of a picturesque park.
Extraordinary weekend in Manavgat - unusual places, services and attractions for travel gourmet
…

Open
For lovers of walks in historical places, the ancient city of Lybre located in the vicinity of Manavgat, is worth visiting. For several decades, archeologists have been working on its territory. They managed to restore ancient Roman baths, mausoleum, necropolis and agora, as well as a number of other buildings of the ancient city. Interesting excursions are conducted through the territory of Lybre, during which travelers can learn many new facts about these places and the culture of locals. 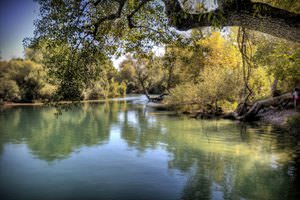 Nature lovers should definitely visit the picturesque Green Canyon Reservoir. It is located in a fabulously beautiful mountainous area, at an altitude of 350 meters above sea level. The dam is surrounded by wonderful forests. Since these places are high in the mountains, even in the height of summer, it is never too hot here. In the vicinity of the reservoir, many fascinating hiking routes with natural viewing platforms have been developed, for travelers. In these places there are also beaches and equipped places for fishing.

This guide to iconic landmarks and sights of Manavgat is protected by the copyright law. You can re-publish this content with mandatory attribution: direct and active hyperlink to www.orangesmile.com.
Manavgat - guide chapters 1 2 3 4 5 6 7 8 9

City tours, excursions and tickets in Manavgat and surroundings

Survived castles around Manavgat
♥   Castle 'Alanya Castle' , 56.9 km from the center. On the map

Sights around Manavgat from our guide 'Extreme places on Earth' 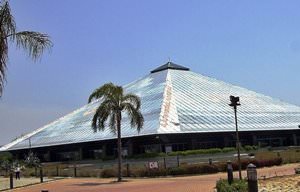 Distance from Manavgat center - 69.2 km.
If you visited the event in the centre and didn’t have an opportunity to estimate its decoration, don’t break down. You can just adore the building and walk in the surrounding garden. Since the building, Sabanci Congress and Exhibition Center is a regular place of country cultural events. In May there is held so-called trade fair “The household goods” where are presented item from Egypt, Iran, Russia, South Korea, Senegal and other countries. The congress and exhibition centre is used as a permanent place for the final of the Antalya Golden Orange Film Festival. Also, there is held the beer festival that is an analogue of the world-known Octoberfest. … Read further

Distance from Manavgat center - 29 km.
The amphitheater built by Zenon was incredibly beautiful and was decorated with numerous fine statues and sculptures. Unfortunately, they haven’t survived to our days. Spectator seats have been carefully restored. Today, ballet and opera performances take place in the theater frequently. This is where the most famous artists in the world appear. Jose Carreras, as well as other famous opera singers, visited the ancient theater several times. The amphitheater of Aspendos, which can hold up to 7000 people, is one of the largest in the world. … Read further

Search touristic sites on the map of Manavgat

Sightseeing in regions nearby Manavgat

Side
Side is a city with rich history. In the past this place was a sanctuary for all sorts of criminals, misfits, pirates and runaway slaves. This is also the former largest slave market in Asia Minor. Nowadays this city has become a large museum under the open sky, which is carefully guarded by the Turkish government. Side is still surrounded by ancient city walls, however, the ... Open »
Belek
Belek is definitely the best resort town in Turkey. It has become that popular because of numerous large sand beaches located on its territory. The main sight of the town is the national park Köprülü Kanyon. You will be surprised, but this park occupies 500 hectares. Here you will find amazing eucalyptus and cypress woods and get acquainted with amazing fauna of this region, ... Open »
Alanya
Alanya is a picturesque town located nearby Taurus Mountains and surrounded by lemon and orange gardens. Besides first class beaches the resort offers to its guests wide choice of excursion programs, multiple shops and restaurants, discos and bars. Alanya was founded in the 4th century. Today only one sight reminds of those times – a piece of an ancient Byzantine wall. Many ... Open »
Antalya
Advantageous geographical location of the city has made it the warmest and the most picturesque resort in Turkey. Just like any old city, Antalya offers not only magnificent beaches, but also a wide choice of excursion routes. One of the most attractive and frequently visited places in this city is the Archeology Museum, which was opened in 1972. The halls of this museum ... Open »
Kemer
Kemer is a picturesque town located not far away from Antalya. This is an ideal place for beach rest. Besides that, favorable climatic conditions are ideal for peaceful rest on the coast of the Mediterranean Sea. This town also has a rich historical heritage. You can see the ruins of Hadrian Kapisi, ancient stone tombs and the antique dam in the region named Olympos. Small ... Open »
Konya
Konya is one of the oldest towns in the world. Here you can see ancient monuments and architectural sights that are kept in a great state, visit best eastern markets, see wonderful temples and mosques. Since ancient times local people have been respecting the traditions of their predecessors, so this place can be distinguished by unique mild atmosphere that covers guests of ... Open »

All about Manavgat, Turkey - sightseeings, attractions, touristic spots, architecture, history, culture and cuisine. Prepare your trip together with OrangeSmile.com - find out the 'must see' things in Manavgat, which places to visit, which excursions to take, where the breathtaking views are waiting for you. Planning your trip with this travel guide will help your to get the most out of Manavgat in few days.