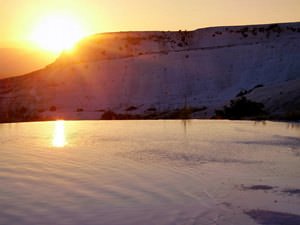 The major attractions of Pamukkale are healing thermal springs and snow-white terraces and basins, so-called travertines formed by the springs. In total, the resort area includes 17 hot springs that differ in their temperature and mineral composition. Now the unique nature attractions, the age of which is several thousands of years, is well-known all over the world and annually attracts an attention of thousands of curious travelers.
Top hotels in Pamukkale for business trip or short vacation
The guests of Pamukkale have an opportunity to choose one of the comfortable modern hotels where they can stay at. The most prestigious of them is Tripolis. This large hotel offers its …

Open
Despite the fact that there are no outstanding historical sites and cultural centers at the resort, this territory cannot be called boring in terms of sightseeing tours. Just a couple of minutes by car separate Pamukkale from notable historical sites and archaeological discoveries that will be certainly of tour enthusiasts’ interest. The most visited attraction in Pamukkale is an ancient city of Hierapolis. The first settlements on its territory were established more than 4 000 years ago.
Extensive archaeological researches in the ancient city were started in the second half of the 19th century, and scientists have been continuously working here since that time. They have found a lot of unique artifacts and restored several ancient architectural monuments which everyone can see now. During the tour, you can take a closer look at the largest necropolis on the territory, a miraculous amphitheater and several ancient temples. Copyright www.orangesmile.com
Guide to Pamukkale sightseeing - things to see and to visit
Pamukkale is one of the most amazing and most incomparable resorts not only in Turkey but also all over the world. The location of the resort is a unique natural terrain. It was created …

Open
One of the most interesting constructions is the Hierapolis Amphitheatre. According to the historical data, it was built in the 3rd century AD. The arena has 300 steps and the total height of the construction is 100 m. The necropolis is also of great interest in terms of architecture and history. It is a trove of unique constructions and monuments, ancient crypts and sarcophagi. Exactly a diversity of constructions has made these places attractive for the further researches. 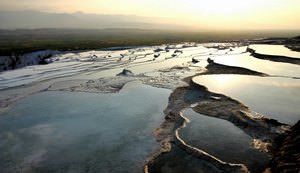 The ancient Apollo Temple is a very interesting place too. According to scientists, it was built several thousands of years ago on land with a high seismological activity. One of the historical monuments of the later period is St. Philip's Church, the age of which is more than 1.5 thousands of years. A lot of interesting legends are connected with this religious attraction. One of them says that the apostle spent the last minutes of his life exactly in this place. The church named after him was built near the saint’s tomb but researchers have not managed to find a sacred burial place yet.
Top hotels in Pamukkale for business trip or short vacation
The guests of Pamukkale have an opportunity to choose one of the comfortable modern hotels where they can stay at. The most prestigious of them is Tripolis. This large hotel offers its …

Open
Invaluable archeologist’s discoveries made in these places are presented in the local museum that can be also visited by guests of Pamukkale. Here, you can see beautiful ancient sculptures and bas-reliefs, old sarcophagi, a coin collection and unique jewels that local residents presented to strict gods for thousands of years.

This guide to cultural sights Pamukkale is protected by the copyright law. You can re-publish this content with mandatory attribution: direct and active hyperlink to www.orangesmile.com.
Pamukkale - guide chapters 1 2 3

Unique spots in Pamukkale and near 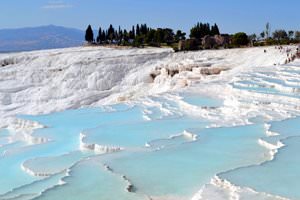 Distance from Pamukkale center - 1.1 km.
The name of the natural complex is translated from Turkish as 'The Cotton Castle'. Pamukkale is open to visitors; In some pools you can even bathe. The only rule that the visitors of the complex must consider - the territory of the complex with the shoes not to enter. The mineral layers are quite brittle, so you should be very careful on the travertines. A part of the complex is closed for the visit. The tourists can graze on it from the special lookout platforms. … Read further

Photogallery of cultural heritage of Pamukkale

Excursions over cultural sights of neighbours of Pamukkale

Marmaris
The impressive building is surrounded with graceful arches. Today all 7 halls of the ancient building are occupied with souvenir shops. The Ibrahim Mosque is a landmark of a later period. Its construction was finished in 1789. The mosque is placed not far from the market and the city visitors should undoubtedly pay a visit to this majestic building and explore the interior ... Open »
Fethiye
A historical monument of the later period is the beautiful mosque Cezayirli Hassan Pasha. Its construction was completed in 1791. Despite the impressive age and impact of time, the mosque still looks very impressive. The Fethiye Museum (Muzesi) invites travelers to learn a lot of interesting things about the history of the city and admire its priceless artifacts. Within walls ... Open »
Kusadasi
The most famous natural landmark is located on the Dilek Peninsula - we are talking about the National Park. There are hundreds of tour itineraries on its territory; there is also the famous cave of Zeus there. The path to it goes through beautiful olive groves. Inside the cave tourists will be able to see the beautiful lake. The water that fills the lake has a sky-blue color; ... Open »
Bodrum
The castle is also called the Castle of St. Peter. Nowadays this is the most famous medieval building of the city. The castle is also home to two museums. Museum of Underwater Archaeology will tell its visitors about the most interesting discoveries of recent decades. Among the items exhibited here you will find many interesting items that belong yet to the Bronze Age. The ... Open »
Izmir
Museum of Ataturk also features an interesting collection of historical artifacts. The thematic of the museum’s exhibits is very diverse, but they all are somehow related to the presence of Ataturk in the city. One of the main streets of Izmir - Ataturk Caddesi – is also named in honor of Ataturk. A beautiful pathway stretches along the coast. Here tourists will find ... Open »
Samos
One of the most interesting and remarkable archeological areas is located close to the Ireon town. The area is a genuine open air museum with its main showpiece being an antique column which was completely restored by scientists and archeologists. One of the main features of the island is plenty of ancient chapels and cloisters each of them having a unique history and legend. ... Open »

Culture guide to Pamukkale. Which fascinating sights to visit once you are in Pamukkale: temples, churches, museums, theaters and castles. Recommendations (with addresses, phone numbers and links) on the places 'must visit' in Pamukkale. Plan your own city excursion by using this page info!