Sightseeing in Goreme - what to see. Complete travel guide 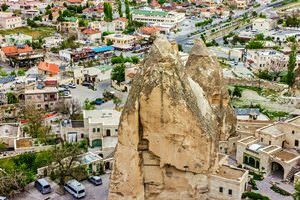 Tourists from all over the world visit the town of Goreme in the Nevsehir Province. This settlement differs from other Turkish cities by its interesting houses made inside caves and near them. Each window offers a spectacular view, and rocks close to cute white houses add a mesmerizing and even somewhat alien look. When taking a stroll in the city, you will feel how charming this place is. Moreover, local people are very friendly and hospitable, so a vacation in Goreme has everything to be successful. Do you want to feel the atmosphere of local life? Then don’t hesitate and book a vacation in a cave hotel.
The history of Goreme started yet during ancient times. Historians proved that first settlers in this territory appeared yet in the 6th century BC. At that time, the settlement had another name, Korama. When Christians came to this land in the 7th century, they gave a new name to the settlement, changing Korama to Matiana or “the country of Our Lady”. This was the period of active development for the Turkish town. First churches appeared in Goreme, as well as roughly four hundred shrines. In the period from the 11th to the 13th centuries, this was the location of Mokissos, a center of patriarchy.
Several years later, when the churches were finished, all of them were decorated with frescos. This event gave birth to a new trend in architecture known as the Cappadocian style. During its long history, this Turkish town changed its name several times. It was Machan during the Ottoman period, then Avcilar, and only in the 70s of the 20th century the town finally changed its name to Goreme. All this time Goreme was developing, turning into a popular tourist destination in the 80s of the previous century. Copyright www.orangesmile.com
The Open-air Museum is the main attraction of Goreme. This is an unusual place that is a major reason why tourists visit this settlement. The museum is an unusual, one-of-a-kind place with no analogs in other parts of the world. It looks like a group of rocks, but each of these rocks hides true treasures such as a chapel, monasteries, and churches. The Church of Saint Barbara is among the most visited landmarks. The fabulous church never ceases to impress its guests with frescos on the walls. If you take a closer look at these walls, you will notice the faces of saints and their images that were canonic in the past. Sienna was the main material that artists used to draw these images. 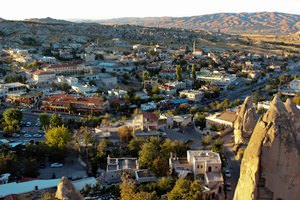 For an unprepared viewer, it may be hard to understand the meaning of these images. Well, it is almost impossible to understand them, to be honest. For example, let’s take an image of locusts. It is hard to guess that this insect symbolizes evil and such a bird as a rooster symbolizes the church. After a visit to this landmark, tourists, as a rule, head to the Elmali Kilise (Church with an Apple) that was built in the 19th century. The church got this name because of a fresco with Archangel Michael who is holding a red-colored circular object that is reminiscent of an apple. There is another theory explaining the unusual name of this church. There are many apples nearby, and so they gave the shrine its name.
A visit to the Uchisar Castle promises to be no less interesting. The castle is built on a rock spur at a height of sixty meters. It doesn’t matter in what part of Cappadocia you are, you will always see this “stone giant”. The castle was built yet during ancient times. As the construction is very durable and solid, the castle was a protective citadel for millennia. 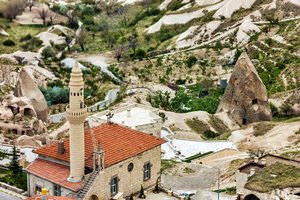 If you step inside the castle, you will notice that the fortress is a true labyrinth of different passages that connect numerous halls. Many passages are closed for tourists, but this fact doesn’t make it less interesting to explore these stone corridors. Don’t forget to get to the top of the fortress as you will be able to admire picturesque and striking scenery. Standing on the top, you will see the surrounding rocks at your feet.
The Rose Valley is one more popular attraction in the region. If you think that the valley got its name because of a large number of roses, you are mistaken. In fact, the valley got such an interesting name because all natural objects in this area are of a volcanic origin. Sunset is the best time to admire the beauty of this area. Get to the top of Aktepe Hill as this is an excellent natural observation area. It is easy to find this hill because it has a bright red color. The valley has some other attractions including several old churches with beautiful frescos and interesting drawings. 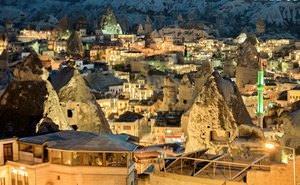 It is possible to get to Goreme from Nevsehir and Kayseri. Both cities have international airports. After your arrival, you need to get on the city bus that goes to the main bus station. The next step is to wait for an intercity bus to Goreme. The ride will be short: approximately 15-20 minutes from Nevsehir and almost half an hour from Kayseri. Without a doubt, it is possible to reach Goreme from other major cities in Turkey, but it will be much longer – almost half a day.
This guide to iconic landmarks and sights of Goreme is protected by the copyright law. You can re-publish this content with mandatory attribution: direct and active hyperlink to www.orangesmile.com.

City tours, excursions and tickets in Goreme and surroundings

National and city parks around Goreme
♥   World Heritage Site 'Göreme National Park and the Rock Sites of Cappadocia' , 1.2 km from the center. On the map

Sights around Goreme from our guide 'Extreme places on Earth'

Distance from Goreme center - 11.2 km.
In the hotel there is a nice sauna and a swimming pool, as well as a massage parlor and a special Yogasaal. Guests can also enjoy a first-class restaurant and sample national food from organic foods, as well as the traditional national dervish rituals. At the Hotel Gamirasu the exciting cooking classes are regularly held. Recently a riding school was opened on its territory. The rest in one of the most unusual hotels in the world can even afford the frugal traveler. The price for the fancy room of the hotel is just a little over 100 USD. … Read further 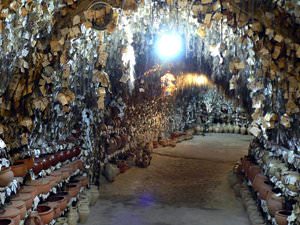 Distance from Goreme center - 8.8 km.
After the opening of the museum, which was combined with the workshop, the number of visitors became even greater. Each lock in the museum has a guide booklet with the name of the woman and her address. Each year, Chez Galip chooses 10 curls and asks these women guests. The women can now also participate in the addition of the museum collection, as well as in the old pottery workshop the magnificent dishes and decor items buy. … Read further 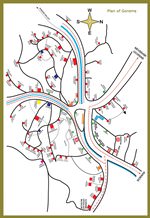 Search touristic sites on the map of Goreme

Sightseeing in regions nearby Goreme

Konya
Konya is one of the oldest towns in the world. Here you can see ancient monuments and architectural sights that are kept in a great state, visit best eastern markets, see wonderful temples and mosques. Since ancient times local people have been respecting the traditions of their predecessors, so this place can be distinguished by unique mild atmosphere that covers guests of ... Open »
Gaziantep
Are you searching or a place where you can spend your free time together with your family members? In this case, it is time to visit the local zoo that is the biggest in Turkey and one of the biggest in Europe. For many years, this zoo has been home to many different species of animals. All of them live in comfortable and spacious cages, so even wild animals have enough space ... Open »
Aleppo
As the market is located in the Old Town, many tourists visit it during excursions. Vacationers can also book excursions to the neighborhoods of Aleppo and archaeological sites that are open to the general public. Ruins of Ebla are one of the most popular destinations as this was the center of one a prominent and powerful kingdom. There is an international airport in ... Open »
Manavgat
The north of the city is covered with a pine forest named Sorgun. Together with the water of the delta of the Manavgat River they form an unforgettable landscape named Titreyengol. There is a waterfall in Manavgat in which water that flows down from the mountain slopes has a milky-white color. On both sides of the creek and under the green foliage of the trees are located ... Open »
Side
Side is still surrounded by ancient city walls, however, the main gates have been damaged. All people, who enter Side for the first time, cannot take their eyes off of the main monumental fountain of the city named Nymphaeum. This fountain was built during the times of Emperor Vespasian. The ancient Agora marketplace, which has the shape of a square, is the location of ... Open »
Belek
Belek is definitely the best resort town in Turkey. It has become that popular because of numerous large sand beaches located on its territory. The main sight of the town is the national park Köprülü Kanyon. You will be surprised, but this park occupies 500 hectares. Here you will find amazing eucalyptus and cypress woods and get acquainted with amazing fauna of this region, ... Open »

All about Goreme, Turkey - sightseeings, attractions, touristic spots, architecture, history, culture and cuisine. Prepare your trip together with OrangeSmile.com - find out the 'must see' things in Goreme, which places to visit, which excursions to take, where the breathtaking views are waiting for you. Planning your trip with this travel guide will help your to get the most out of Goreme in few days.