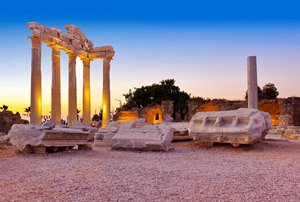 One of the main symbols of the city is an amazing mosque Merkez Külliede Camii, it is the largest mosque on the territory of the Anatolian coast. The religious monument was built in 2004, the mosque has four minarets, the height of which is 60 meters. The beautiful mosque is one of the few in the world, the entrance to which is open to representatives of all religions. Tourists will have the opportunity to appreciate its luxurious interior design, precious marble is used in the decoration of the mosque. There is a special tank with drinking water inside, everyone can take it in bottles. There is formed a beautiful park around the mosque with interesting landscape decorations, it is a nice place where you can relax on a hot day.
Guide to Manavgat sightseeing - things to see and to visit
Manavgat is a city located on the coast of the Mediterranean Sea in the delta of the Manavgat River. This place is known for a large number of amazing waterfalls. The city lies at the foot …

Open
There is another notable religious monument at the exit of the city - Sanayi Camii mosque. It can be visited only by representatives of the Muslim faith, but the building still does not remain without the attention of tourists. It is notable for its unusual architectural form, the building has a large central dome and four semi-domes made of tin. The mosque owes its unusual name to the fact that its facade is painted in a pleasant light green colour. The construction of the religious object was fully completed in 1973, its facade is decorated with elaborate ornaments with illustrations from the Koran.
Manavgat is located in an interesting archaeological area, the first cities in its place were founded thousands of years ago. Now there are several archaeological areas in the vicinity of the city where research is conducted, tourists can visit them as part of excursions. There are also preserved amazing ancient monuments directly on the territory of the city, the most famous is the main fountain of Manavgat. It was built in 74 ad, by order of Emperor Vespasian, there is a memorial inscription on the fountain. Now a large stone fountain is part of the landscape park, for almost 2,000 years the fountain remains active. There are walking paths next to it, you can see many rare plants and admire the centuries-old trees here. Copyright www.orangesmile.com
Family holidays with kids in Manavgat. How to entertain your child, things to show to children.
Manavgat is a great place for a family holiday. There are many historical and cultural attractions in the city and in the surrounding area leftover from ancient times - these are the Greek …

Open
There is another interesting ancient monument in the immediate vicinity of Manavgat, reminiscent of the reign of the great Roman Emperor - the triumphal arch of Vespasian. It is located on the outskirts of Side city, the height of the ancient buildings is 13 meters. The luxurious arch with columns is decorated with antique sculptures, next to it is located a developing large archaeological area. Here researchers have discovered beautiful sculptures of Roman emperors, which are now presented in the local Museum. Just behind the arch are the ruins of the ancient city Side, almost the entire historic district is now available for tours. The ancient city was founded in the 7th century BC, here was restored a large amphitheatre, the main avenue of the city and fragments of ancient buildings. 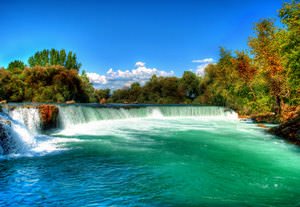 Those who enjoy walking in historical places will be happy to visit the ruins of the ancient city Seleukeia, which is located ten kilometres from Manavgat. The ruins were discovered by archaeologists relatively recently, in the middle of the 20th century, the area was rich invaluable finds. Here archaeologists have found valuable works of art and crafts made of precious metals, which are now stored in one of the museums of Antalya. Visitors to the historic district will be able to admire the ruins of prehistoric buildings, here were partially restored palaces of local rulers and houses of ordinary citizens. The main value of the area is an ancient necropolis and a large-scale complex of Roman baths.
Cuisine of Manavgat for gourmet with top restaurants and cafe
Manavgat will be a great place to explore the traditions of Turkish cuisine, attractive eateries and restaurants in the city can be found at every turn. Most of them have affordable prices …

Open
A well-known archaeological site far beyond the borders of Turkey is Lyrbe district, which can be reached from Manavgat in less than 30 minutes. This area is notable for the fact that it is located on the territory of a vast pine forest, so the ancient buildings found here look very impressive. During the tour, you can see the restored columns of luxurious palaces and temples here, fragments of stone houses, reconstructed square and fragments of temples. 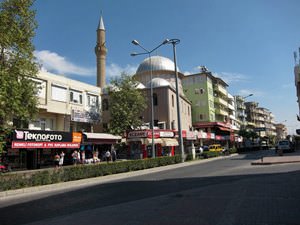 The ancient town Lyrbe was founded in the 4th century BC, for many years it remained a major centre of trade. The existence of the historical region is not known to all tourists, it is far removed from the popular tourist routes. To reach the archaeological area, you should go on foot. It will be a fascinating walk through the picturesque pine forest, there are hidden ancient values in its thickets. Manavgat is ready to offer its guests a rich excursion program.

In the section below, you can get one of our excursion, activities or city discovery tours over Manavgat and surroundings. Our website offers 10-30% lower ticket prices, when compared to the offline purchase on the spot.

City tours, excursions and tickets in Manavgat and surroundings

This guide to cultural sights Manavgat is protected by the copyright law. You can re-publish this content with mandatory attribution: direct and active hyperlink to www.orangesmile.com.
Manavgat - guide chapters 1 2 3 4 5 6 7 8 9
Car rental on OrangeSmile.com

Photogallery of cultural heritage of Manavgat

Excursions over cultural sights of neighbours of Manavgat

Side
During an excursion you may visit the temple of Apollo, which was built back in the prehistoric era. For more than two thousand years, its slender marble columns has being streaming up; on a scenic coast its construction looks great. One of the most interesting buildings in Side is a Roman aqueduct constructed in the 2nd century BC It is notable that the building is located ... Open »
Belek
Belek is one of the newest resorts in Turkey, therefore it cannot be proud of its rich cultural heritage and centuries old history. The majority of its sights have natural origin. Therefore, Belek attracts not only fans of beach holidays, but also fans of eco-tourism. Beautiful Kursunlu Waterfall is considered the main symbol of Belek. As a rule, a trip to the waterfall is ... Open »
Alanya
The medieval fortress of Alanya Kalesi is an important architectural landmark built in the 13th century. During the Middle Ages the castle was used as a powerful defensive fortification. Nowadays most of the ancillary buildings have been destroyed, but the main building has remained in quite a good state. There is a museum under the open sky in the territory of the castle. ... Open »
Antalya
Previously the majority of the exhibits found here were kept in Yivli Minare, which is also an important object of excursions. The height of the beautiful tower estimates 38 meters. It was built in the 13th century and has perfectly preserved till our days. The beautiful minaret consists of eight half-columns, each of which makes the building look even more spectacular. The ... Open »
Kemer
Kemer and its surroundings are home to a large number of various attractions. This is the place where tourists can visit internationally famous historical monuments and museums, walk through picturesque parks and see unique natural attractions. The town of Olympos is an important historical object. The ruins of the town are located in the immediate vicinity of Kemer. This is ... Open »
Konya
The main landmark of the town is the Mevlana Museum, which is sometimes called the Mausoleum of Rumi. The museum is named after the great mystic, who has founded the order of dervishes many centuries ago. In addition to the grave of legendary Mevlana, museum has collections of various exhibits. Here you can see old musical instruments, hand-written copies of the Koran and art ... Open »

Culture guide to Manavgat. Which fascinating sights to visit once you are in Manavgat: temples, churches, museums, theaters and castles. Recommendations (with addresses, phone numbers and links) on the places 'must visit' in Manavgat. Plan your own city excursion by using this page info!