Sightseeing in Kusadasi - what to see. Complete travel guide 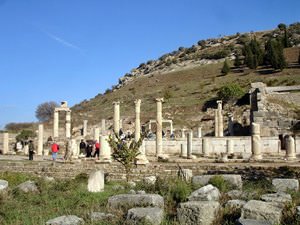 Kudasasi is a Turkish resort located on the shore of Aegean Sea around 90 kilometers south of Izmir. The town is surrounded by popular antique monuments. Among which are such famous ancient towns as Ephesus, Priene, Didim and Miletors. You can also reach Samos Island that belongs to Greece from Kudasasi.
Authentic traditions, festivals and lifestyle of Kusadasi inhabitants
Kusadasi is a beautiful old city with its interesting features and traditions. Its name can be literally translated as "Bird Island", pigeons have been its main symbol for hundreds of years. …

Open
The name of the resort can be translated as “Birds Island”. The town got this name because of the small island named “Pigeon Island”. The island is connected with the mainland by a small manmade road. For centuries the island has been a home for pigeons, herons and other birds.
The history of Kudasasi is mostly connected with life of the famous pirate Barbarossa. For many years he was terrorizing whole Mediterranean by its cruel attacks. The pirate was hiding in Kudasasi, in an ancient fortress built by the Venetians in the XVI century. The fortress is located on this Pigeon Island and is still in good condition. Copyright www.orangesmile.com
Excursion over cultural sights of Kusadasi - 'must visit' points of interest
Kusadasi is a picturesque town with a rich history, where many interesting excursions and entertainment programs are waiting for its guests. The most striking historical monument of the town … 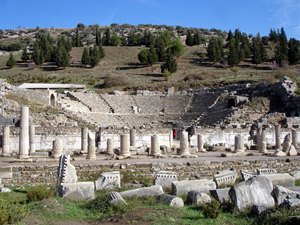 Those people, who like active rest, get an opportunity to try water ski or play beach volleyball. If you enjoy peaceful rest, you will find numerous silent corners in Kudasasi.

There are many restaurants along beaches. Visit them as you will be able to taste delicious national dishes that usually include seafood.
Your active city break in Kusadasi. Attractions, recreation and entertainment - best places to spend your day and night here
Kusadasi is a real godsend for fans of beach vacation. The resort has more than a dozen beaches, and each of them differs from all the others. Pamucak Beach is considered to be the most …

Open
Nearby the town are located thermal water springs, National park with Zeus cave on its territory, Kursunlu monastery and more. You can also visit Kaleici Mosque and Kale region famous for its narrow ancient streets. 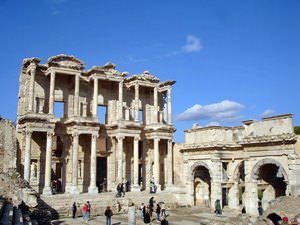 In the territory of the resort and in its immediate vicinity, many interesting antique attractions were preserved. An excellent example is the Library of Celsus. This ancient Roman library was built in 136, during the reign of Emperor Hadrian. At that time, there were about 12,000 scrolls in its walls. Even now, the preserved fragments of the building allow us to fully appreciate how large the library was. Researchers managed to restore part of its facade with columns. Initially, the height of the library was 16 meters.
Advices to travellers: what you should know while being in Kusadasi
1. The most appropriate time for rest is the period from June to August. At this time, the weather is warm and sunny. The rainy season with strong wind begins in autumn. Travelers who expect …

Open
History lovers will be interested in the archaeological area of ​​the Receptions. Once in this place there was a large ancient Greek city. Initially, this city was founded in the upper part of a spacious plain and with time, the soil sagged because of groundwater. This led to the destruction of many streets. Modern researchers managed to find fragments of only two streets. Now visitors of this area can see the foundation of ancient buildings and other antique buildings. 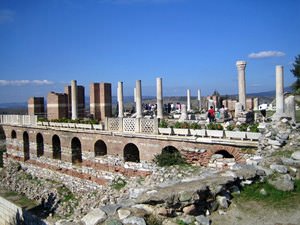 To diversify walks in historical places, a trip to the Dilek national park can be made. Its natural beauty will not leave anyone unsatisfied. This park completely occupies the territory of the peninsula of the same name. Here, among the surrounding natural splendor lives rare animals, birds and insects. It is worth mentioning that these places are also not devoid of historical sites. On the territory of the park, are the ruins of two ancient cities. Also here, is a functioning monastery, along which interesting excursions are conducted.
Extraordinary weekend in Kusadasi - unusual places, services and attractions for travel gourmet
…

Open
A very interesting and symbolic landmark of Kusadasi is the House of the Virgin Mary. If you believe the legends, then she spent the last years of her life in this house. Now next to the ancient building is a miniature church, whose age is also several hundred years. The so-called Wailing Wall, is also located here and many travelers are attracted to these places by a healing spring. If you believe the stories of locals, the water from this source can do real miracles. 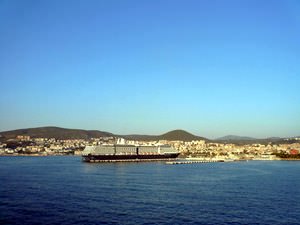 The caravanserai which was preserved in the city was built in the beginning of the 17th century. It is a traditional inn, in which for many years the caravaners and merchants who were traveling to neighboring cities stopped. Currently in this historic building is a popular hotel, decorated in a unique medieval style, and a well-known restaurant.

This guide to iconic landmarks and sights of Kusadasi is protected by the copyright law. You can re-publish this content with mandatory attribution: direct and active hyperlink to www.orangesmile.com.
Kusadasi - guide chapters 1 2 3 4 5 6 7 8 9

City tours, excursions and tickets in Kusadasi and surroundings

Survived castles around Kusadasi
♥   Castle 'Leros Castle' Leros, 86.1 km from the center. On the map

♥   Castle 'Monastery of Saint John the Theologian' Patmos, 86.3 km from the center. On the map

Sights around Kusadasi from our guide 'Extreme places on Earth' 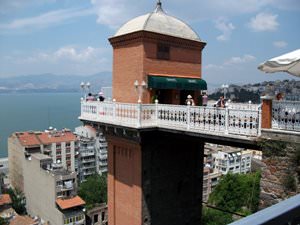 Distance from Kusadasi center - 63.2 km.
There is one of the best viewing platforms in the city, as well as the wonderful restaurant with the panorama on Izmir, where one can taste the popular dishes of Turkish cuisine and delicious sweets. The experienced tourists recommend to visit the restaurant in the evening. At sunset the panorama of the city looks particularly impressive and beautiful. The legendary restaurant, which is located in the upper part of the elevator shaft, can also be recommended to the vegetarians, at their disposal a special menu. … Read further

Search touristic sites on the map of Kusadasi

Sightseeing in regions nearby Kusadasi

Samos
Samos is a beautiful tourist resort, which is located in the Aegean Sea. This is a resort town that has focused all its economic activities on delivering travel services. This small island has no large industrial capital, so Samos totally works for tourists. Among the resort areas of the island the most significant ones are the following towns - Pythagorio, Karlovassi, Vatha ... Open »
Samos Island
The great attraction is located in Heraion, that’s the beautiful temple of Hera considered by Herodotus to be one of the greatest wonders of the world. This majestic building has been preserved only in part; during the tour, travelers can appreciate the extent of the temple and admire surviving elements of sculptures. The island's capital is the city of Vathy. It will appeal ... Open »
Izmir
Izmir is a large and famous cultural center and a beautiful resort. The city is located along the coastal line and so it is surrounded by water from one side and by high mountains with ancient forests from another one. There are many places of interest in the city as it has managed to preserve its historical look. You will also find numerous museums and theatres in Izmir, so ... Open »
Patmos
On Patmos you will find numerous old buildings. St. John the Evangelist Monastery was built in 1088; nowadays the walls of the monastery keep the exhibition of a small museum. Here visitors can see ancient manuscripts and a collection of jewelry. The shrine is kept by 40 monks, which will happily tell the story of the monastery to their guests and will show all interesting ... Open »
Patmos Island
Patmos is one of the smallest and most attractive islands of Greece. It features amazing religious sites, rocky desert landscapes, as well as incredibly beautiful beaches. Patmos is one of the most secluded and tranquil islands of Greece, so many travelers visit it only during sightseeing tours. Vacations on this beautiful island will give a lot of impressions for those who ... Open »
Bodrum
The embankment of this town is beautiful and very original. When tourists come to see Bodrum, first they usually don’t like very small and narrow streets that look quite depressively. However, if you take a walk along them, you will change your opinion and see the town and its citizens in completely other light. Currently Bodrum is known as one of the most fast-developing ... Open »

All about Kusadasi, Turkey - sightseeings, attractions, touristic spots, architecture, history, culture and cuisine. Prepare your trip together with OrangeSmile.com - find out the 'must see' things in Kusadasi, which places to visit, which excursions to take, where the breathtaking views are waiting for you. Planning your trip with this travel guide will help your to get the most out of Kusadasi in few days.