Sightseeing in Bodrum - what to see. Complete travel guide 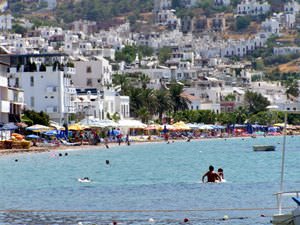 Bodrum is located in the legendary place Halicarnassus that really can tell you a lot about history of this region. This town keeps enormous number of sights, both historian and cultural. We should mention that initially the symbol of this town was chosen the fortress of Saint Peter that was built in the times of knights who tried to protect the borders of their town. Today you won’t find any knights in this fort and the space is used to store the exhibition of the Museum of Underwater Archeology of Turkey.
Top places to stay in Bodrum - most luxurious hotels
In Bodrum, there are several elite resort hotels, including Vera TMT Resort enjoying great popularity among tourists. The large-scale resort hotel located a few steps away from the coast …

Open
The fort has a large trading street that is full of cozy shops, cafes, restaurants and snack bars.

The embankment of this town is beautiful and very original. When tourists come to see Bodrum, first they usually don’t like very small and narrow streets that look quite depressively. However, if you take a walk along them, you will change your opinion and see the town and its citizens in completely other light.
Currently Bodrum is known as one of the most fast-developing cities in Turkey. Also this is one of the most famous resorts of this country that attracts large number of visitors year after year. By the way, there are many jewelry stores in this town, so every tourist is able to purchase an inexpensive, but very beautiful and memorable piece of jewelry. Copyright www.orangesmile.com
Old hotels keeping the history of Bodrum
Among Bodrum's hotels recreating the historical atmosphere, Hotel Atrium deserves special attention. A building occupied by the hotel is designed according to the model of an ancient Roman …

Open
Fans of excursions will enjoy the Museum of Underwater Archeology, it presents findings of divers of different periods. One of the most valuable and unusual exhibits is a ship that belonged to the ancient Egyptian pharaohs, as well as the found on board jewellery. The most incredible exhibit is a Byzantine ship that sank hundreds of years ago. The uniqueness of the ship lies in the fact that it was able to be perfectly preserved for many centuries later. 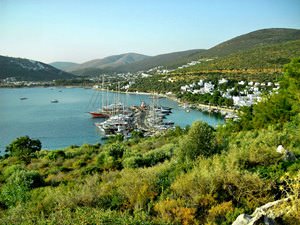 For nature lovers in Bodrum, very interesting excursions to the nearby island Kara Ada are organised. Its primary value is in the hot springs, which feature unique therapeutic properties. There are several different pools and mud baths, as well as interesting walking tours which are held on the island. This island will definitely appeal to those who like to spend time away from the busy tourist spots.
Best hotel choice for romantic escape, wedding or honeymoon in Bodrum
When choosing a hotel for a romantic stay, be sure to pay attention to Hotel Karia Princess. Luxury rooms with king-size beds exquisitely furnished in the style of past centuries are …

Open
In the city there are some unique archaeological sites, one of the most famous is the ancient amphitheatre. It was discovered in the late 20th century on the hillside of Göktepe. This huge amphitheatre, which in ancient times could accommodate up to 13,000 spectators, is perfectly preserved to this day. In recent years, the amphitheatre is used for concerts and other cultural events. 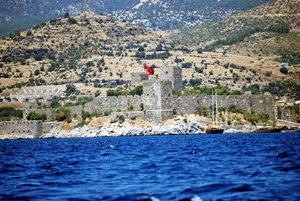 In Bodrum there is a famous water park "Dedeman", which is among the largest and most popular water parks in Europe. The choice of rides and swimming pools in it is just a huge, there are more than 20 slides alone. Water Park has amazing décor; it is decorated with exotic plants, among the thickets of which are equipped spacious terraces and recreation areas.
Shopping in Bodrum - main shopping streets, outlets and boutiques
Bodrum is full of interesting shopping centers and picturesque markets. In 1998, the opening of the Oasis trading center, which remains the largest one in the city, took place. The area of …

Open
Among those fond of exploring the historical places, tours featuring Myndos Gate are very popular. They represent a fragment of preserved fortifications that surrounded the ancient city. In addition to the amphitheatre, these gates are the most valuable monument of antiquity. 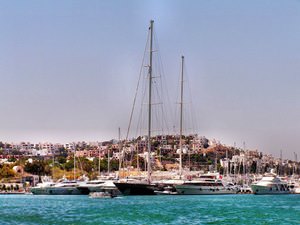 A unique monument is the Mausoleum of King Mausolus, that was built in the 4th century BC. During the Middle Ages the mausoleum was partially destroyed, and locals have used its stones to build their houses. Only in the 19th century, the historical value of the mausoleum was recognized officially, within its walls many priceless artefacts were found.

This guide to iconic landmarks and sights of Bodrum is protected by the copyright law. You can re-publish this content with mandatory attribution: direct and active hyperlink to www.orangesmile.com.
Bodrum - guide chapters 1 2 3 4 5 6 7 8 9 10 11 12

Survived castles around Bodrum
♥   Castle 'Bodrum Castle Turkey' , 0.4 km from the center. On the map

Sights around Bodrum from our guide 'Extreme places on Earth'

Distance from Bodrum center - 1 km.
When the king Mausolus died, the tomb has not been completed yet. Construction of the mausoleum was finished only in 350 BC. A grand building lasted nearly 2 000 years. During that time, the structure has experienced many important historical events, including numerous attacks by pirates and the conquest. The mausoleum was fully destroyed in the 15th century. Maltese took marble slabs and used them for the construction of the fortress, which bore the name of St. Peter. In 1966, fragments of bas-reliefs and statues of the once majestic tomb were found during archaeological investigations. As so, scientists managed to restore its image as closely as possible. … Read further

Search touristic sites on the map of Bodrum

Sightseeing in regions nearby Bodrum

Kos
Kos is a beautiful town and a magnificent beach resort that has gained popularity among European and American travellers within just several decades. Old buildings were fully destroyed during the earthquake in 1933. After this the town was rebuilt simply from ashes. Today this is a wonderful corner of nature rich in spacious parks and valleys, palm groves and fairytale-like ... Open »
Kos Island
Kos is the third biggest Greek island. It’s an extremely popular and easily accessible tourist resort. Island is known for an abundance of natural and historical landmarks, excellent beaches and entertainment places. Kos offers a huge choice of hotels and affordable apartments attracting thousands of travelers and nature lovers every year. Despite its popularity, Kos is still ... Open »
Kalymnos Island
The picturesque Greek island of Kalymnos is known primarily as a major center of production of sponge; fishery has remained the main harvesting of locals for many hundreds of years. Delicious honey is also produced there. The only state diving school in Greece is working on Kalymnos. Every year, fans of beach activities, scuba diving and rock climbing, as well as travelers who ... Open »
Leros Island
The most visited cultural center of Leros is the Archaeological Museum located in Agia Marina. It can boast hundreds of priceless finds of archaeologists, and museum collection is regularly updated. There are several major archaeological areas nearby, where you can admire ruins of ancient temples and residential buildings, stroll through the streets of prehistoric towns and ... Open »
Tilos Island
The small island of Tilos is located close to Rhodes and is part of the Dodecanese. It attracts travelers primarily as the location of unique nature reserves and archaeological areas. Despite its modest size, the territory of the island consists of 16 nature reserves, which are home to dozens of rare species of birds; you can also find hundreds of rare species of plants there. ... Open »
Marmaris
Marmaris is a city located in the world's largest harbor. This is a place on the south-western side of Turkey where meet the Mediterranean and the Aegean Sea. Marmaris is a famous Turkish resort, 76 percent of which territory is covered by forests and small hills that stretch along the coast. Since ancient times Marmaris has been famous as Physkos. That place was well-known ... Open »

All about Bodrum, Turkey - sightseeings, attractions, touristic spots, architecture, history, culture and cuisine. Prepare your trip together with OrangeSmile.com - find out the 'must see' things in Bodrum, which places to visit, which excursions to take, where the breathtaking views are waiting for you. Planning your trip with this travel guide will help your to get the most out of Bodrum in few days.