Sightseeing in Ankara - what to see. Complete travel guide 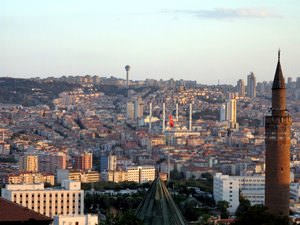 Ankara is not just a capital of Turkey, but also a popular resort city that attracts travellers by its unforgettable architectural sights, modern entertainment centers and well-developed infrastructure. This city was mentioned for the first time in the 7th century. Ankara was initially called Ansira and was quite a famous trading center located on the crossroads of important routes connecting Europe and Asia.
Excursion over cultural sights of Ankara - 'must visit' points of interest
Haci Bayram Mosque remains the most famous attraction of Ankara. It was built in the beginning of the 15th century and still remains one of the best known and most respected religious …

Open
The city has retained numerous interesting historical sights created in different epochs. The times of the Roman Empire are represented by the Temple of Augustus. Nearby you will find Haci Bayram Mosque. Among ancient sacred places we should also underline Aladdin Mosque. These two places are the most beautiful Islamic temples in Ankara and, most probably, in whole Turkey as well, as it’s really hard to find another buildings with so refined and beautiful design. The local Citadel and Fortress, which stand on one of hills, are also definitely worth visiting. The buildings are surrounded by the double protective wall and the whole architectural complex has been built yet in the 6th century, and is considered one of the oldest sights of this city. A viewport is built on the hill and from it you can see a magnificent view of the city with its wonderful mosques, modern trading centers and squares.
One more building, from which you can enjoy the views of the city’s surroundings, is called Atakule Tower and is located on the central square. This tower is 125 m tall, and this is one of the most unforgettable modern buildings. When it's time to talk about entertainments of Ankara, the very first thing that comes to mind is Water City aqua park. This park serves several thousand of guests every day. Here you will find artificial waterfalls, slides, pools, sports areas, tennis courts, golf fields and many other entertainments that will fit any taste. Copyright www.orangesmile.com
Your active city break in Ankara. Attractions, recreation and entertainment - best places to spend your day and night here
Ankara never ceases to attract fans of nightlife. Every evening guests of the city can enjoy exciting entertainments in numerous clubs and colorful discos. Laila is the most famous club of …

Open
Ankara also features a number of unusual attractions, such as the locomotives museum, located in the Maltepe district. This open-air museum was founded back in 1924, and it is possible to see old portages of different eras, and even go inside of them. Part of the museum is an old two-storey building, with an overall area of 680 sq. meters. This building represented a diverse collection of artefacts, here you can see the old lights, antique documents, and portions of devices that were used by the railroad. 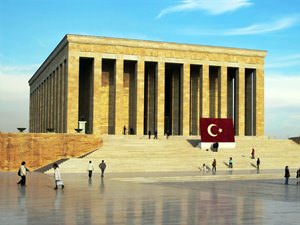 Anyone interested in ancient history should visit the Museum of Ancient Anatolian Civilizations. It is considered to be one of the main cultural centres in Turkey, as this museum contains a fascinating collection of archaeological and historical artefacts. This museum is also a historical centre too, it was founded in 1921, and the museum reached its peak as a cultural centre during the reign of Kemal Ataturk. Today the museum holds thousands of unique exhibits brought in from different parts of the world. One of the most unusual and valuable exhibits of the museum is considered to be a fragment of the wall of the Neolithic period, the age of which dates back to more than 8000 years. The museum presents thematic collections of exhibits on the history of ancient Greece and Rome.
Advices to travellers: what you should know while being in Ankara
1. The tourists, who plan to devote much time to trips, are recommended to visit Ankara during the off-season period. It is too hot here in summer. 2. Hand-made items made of copper …

Open
Another unusual attraction - Yazılıkaya sanctuary, which is a complex of rock premises. It was founded back in the Hutt era, and today its main value for tourists and researchers are hundreds of images carved on the walls of the sanctuary. The researchers believe that once upon a time these sanctuaries were the property of the royal family, as well as the urn with the ashes of its deceased members. Today anyone can visit the ancient sanctuary and admire its well-preserved bas-reliefs. 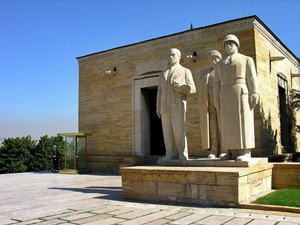 Those fond of nature show huge interest to the park Goksu, that was officially opened in 2003. The area of this vast park is more than 500 000 sq. meters, the park is ideal for a holiday with your family. On its territory are many playgrounds, cafés and attractions, and there are special places for a picnic. In the evening, many go for a walk on the pier, which is decorated with spectacular lighting.

This guide to iconic landmarks and sights of Ankara is protected by the copyright law. You can re-publish this content with mandatory attribution: direct and active hyperlink to www.orangesmile.com.
Ankara - guide chapters 1 2 3 4 5 6 7 8 9 10 11 12 13

Shopping streets in Ankara
♥   Shopping area ' Ankara' Ankara, 0.4 km from the center. On the map

♥   Shopping area ' Mithatpasa Avenue' Ankara, 1.5 km from the center. On the map

♥   Shopping area ' Atatürk Boulevard' Ankara, 2.2 km from the center. On the map

Art galleries in Ankara and around
♥   Art museum 'Hacettepe Museum' Ankara, 0.6 km from the center. On the map

♥   Art museum 'State Art and Sculpture Museum' Ankara, 0.7 km from the center. On the map

Sightseeing in Turkey: things to see

Troy Aqua Park, which is located in Belek, is a no less interesting place. The park was open in 2015; there is a giant statue of the Trojan horse in the center of the entertainment complex, and the body of the horse is the starting point for the highest rides. Visitors will find here numerous attractions, swimming pools, artificial rivers and special playing areas for youngest visitors of the park. … Open

Search touristic sites on the map of Ankara

Sightseeing in regions nearby Ankara

Goreme
If you step inside the castle, you will notice that the fortress is a true labyrinth of different passages that connect numerous halls. Many passages are closed for tourists, but this fact doesn’t make it less interesting to explore these stone corridors. Don’t forget to get to the top of the fortress as you will be able to admire picturesque and striking scenery. ... Open »
Konya
The suburbs of this place are no less interesting. You can make an excursion to one of the oldest villages that is called Çatal Hüyük. The locals consider this settlement a place of power. The suburbs of the village are full of nature reserves, the walk of which will leave simply unforgettable memories. Picturesque grottos, noisy waterfalls and birds singing – this is a ... Open »
Bursa
Throughout its history, the city saw a lot of destructive wars but it has managed to preserve several invaluable historical monuments. One of the major historical symbols is the Ulu Cami, the brightest monument of the times of the Ottoman Empire's reign. It is important to note that the city territory and its surroundings have been attracting an attention of archaeologists ... Open »
Istanbul
The current dome was installed in 563. This is a true piece of an architectural art - the perimeter of the building has windows, so it looks like the dome stands on air. Over 900 years Hagia Sophia was the main cathedral of Constantinople (the former name of Istanbul). In 1453, by order of Sultan Mehmet the Conqueror, the Orthodox basilica was converted into a mosque. Several ... Open »
Manavgat
Manavgat is a city located on the coast of the Mediterranean Sea in the delta of the Manavgat River. This place is known for a large number of amazing waterfalls. The city lies at the foot of the gentle slopes of the Taurus Mountains, which are covered with dense forests with amazing small waterfalls hiding among them. You can reach these waterfalls by making a jeep ride. The ... Open »
Side
Side is a city with rich history. In the past this place was a sanctuary for all sorts of criminals, misfits, pirates and runaway slaves. This is also the former largest slave market in Asia Minor. Nowadays this city has become a large museum under the open sky, which is carefully guarded by the Turkish government. Side is still surrounded by ancient city walls, however, the ... Open »

All about Ankara, Turkey - sightseeings, attractions, touristic spots, architecture, history, culture and cuisine. Prepare your trip together with OrangeSmile.com - find out the 'must see' things in Ankara, which places to visit, which excursions to take, where the breathtaking views are waiting for you. Planning your trip with this travel guide will help your to get the most out of Ankara in few days.