Sightseeing in Trabzon - what to see. Complete travel guide 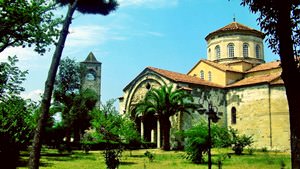 This city is located in the eastern part of Turkey. Trabzon is widely known as a major historical and cultural center, which traditionally attracts fans of beach rest and hot sun. Particular attention should be paid to sights and tours that are offered in Trabzon.
The most visited architecture place of interest is Palace of Ataturk, which was founded in the early 20th century. Today the palace has been transformed into a museum, which exhibits collections of furniture, paintings and other interior items that strike visitors by their luxury. The palace is located in the heart of a picturesque pine tree grove. This is one of the most beautiful places of the city.
The oldest building is of this place is Castle of Trabzon. The castle is in great state, so even nowadays visitors have an opportunity to walk in long corridors of the castle and feel the power of this grandiose medieval building. Arsenal Tower is, without a doubt, another remarkable monument of antiquity. Several centuries ago this was a beloved place for recreation and meetings of aristocrats. Here have been organized large parties and celebrations. Copyright www.orangesmile.com
Altyndere National Park is located approximately within a half-hour drive from the city’s downtown. This is a perfect place for walking and camping. It is worth mentioning that hunting is prohibited in the reserve. This park is also the location of one of the oldest religious sites – Sumela Monastery. The monks, who live in the monastery, are always ready to greet guests and tell them the story of the building of this sacred place, as well as to show its magnificent halls and icons. The city has several beautiful parks. Chamburnu pine forest is worth your detailed attention. Located on the coast, this park is situated in the piedmont region near Boztepe Park. In 1950 one more attraction appeared in Trabzon. This is Sulfur Lake that has appeared after a strong earthquake and has a volcanic origin. 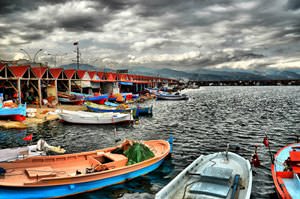 Fatih Mosque is a fabulous architectural monument. It has a very unusual history. Initially, a Basilica, built in Byzantine style was located in its place. Later, it was converted into a mosque. The Basilica was apparently founded in the 14th century. It took hundreds of years to reconstitute the building. The reconstruction was completed in 1804 only. Unique frescoes and mosaics of the old basilica were entirely painted over. The old building managed to preserve only unique features of Byzantine style during its lifetime.
Beautiful Yeni Kum mosque suffered a similar fate. Primarily, it was an old Christian church. The exact date of its construction is unknown. There remained a memorial inscription on one of the walls. It keeps the year 1291. Remaining fragments of Christian frescoes and mosaics that used to decorate the basilica, as well as special elements of natural wood are other fabulous features of the mosque. 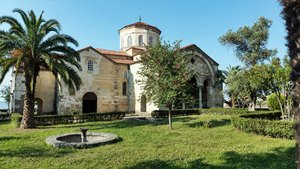 Miniature Byzantine St. Anne's church is also an important historical monument for the city. It was built in the 9th century. Built in the era of the Byzantium Empire, it miraculously preserved not only original external features, but a number of elements of internal decor. At a certain period, the church had been converted into a mosque, however, it did not lose its historical charm.
A tour to the city's Historical Museum promises to be fascinating. The museum occupies a beautiful two-storey mansion. The variety of its exhibits is incredibly large. You can see ancient weapons of different eras, works of art, vases, and antique furniture and utensils. There's a spacious basement room in the old mansion. Some of the unique exhibits are kept there nowadays. 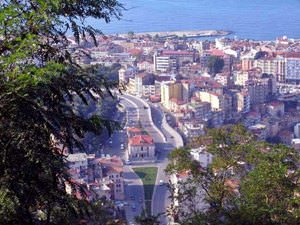 The Gulbakhar-Khatun mosque is of great architectural value. It was built during the reign of Sultan Selim I in honor of his mother. The mosque is distinguished by luxurious exterior and interior decor. The walls are decorated with skillful painting. You can enjoy plenty of precious design elements and works of art.
This guide to iconic landmarks and sights of Trabzon is protected by the copyright law. You can re-publish this content with mandatory attribution: direct and active hyperlink to www.orangesmile.com.

City tours, excursions and tickets in Trabzon and surroundings

Shopping streets in Trabzon
♥   Shopping area ' Kahramanmaraş Avenue' Trabzon, 0.8 km from the center. On the map

♥   Shopping area ' Uzun Street' Trabzon, 1 km from the center. On the map

Sights around Trabzon from our guide 'Extreme places on Earth' 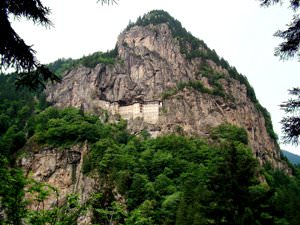 Distance from Trabzon center - 35.2 km.
The path isn’t equipped at all and is incredibly complex, so an average rise from the foot of the mountain to the monastery takes 30 minutes. Many travelers prefer to save power before the rise and overcome the way from the village to the foot of the mountain by car, while the most patient and determined prefer walking all the way and enjoying beauty of these places in full. … Read further

Search touristic sites on the map of Trabzon

Sightseeing in regions nearby Trabzon

Batumi
This part of Batumi is always alive; it seems to be encircling the city with a two-kilometer tape. It is here that the city’s symbol - a dolphin with a palm branch is located. It is dolphins that are the pride of Batumi, because you can see them at the seaside at any time of the year. The beaches here are stony and perfectly suited for those who do not like sand. ... Open »
Adler
During the Caucasian wars among the Russian officers were Germans. In addition, numerous Russian officers perfectly knew the German language. It was quite difficult for them to pronounce the name Ardlar, in comparison to pronouncing the German word "Ardler", which in translation meant "Eagle". One of the main features of the city was a specific climate. Due to the increased ... Open »
Khosta
There is everything you need for comfortable and interesting recreation: a worthy choice of hospitality venues and restaurants, attractive beaches, and a great variety of interesting attractions. Hosta gained the status of the city in 1899 but the first settlements at the site of the modern city appeared much earlier. The city started to be actively built up in 1912. The ... Open »
Kutaisi
Kutaisi has an airport that serves flights from many countries of the world. However, when planning a vacation in Kutaisi, tourists need to keep in mind that the number of flights to Kutaisi is not big. It is easier to reach Tbilisi first. After that, continue your journey on a train to Kutaisi. The journey time is roughly six hours. Besides trains, there are buses to ... Open »
Sochi
Despite the fact that tourists have a wide choice of hotels, they should book rooms in advance, as Sochi is visited by many tourists even in winter. Sochi is one of the largest balneological resorts in Russia. There are over 50 mineral springs. Near some of them, there are upscale wellness centers. The first of them started to welcome patients at the beginning of the 20th ... Open »
Krasnaya Polyana
Originally, the village was called Kbaade and then Romanovsk, as it was often visited by the representatives of the Romanovs. Consequently, the city was eventually changed to Krasnaya Polyana. It is considered that this name was given by Greeks inspired by the beauty of the fall purple fern growing here. Not far from Krasnaya Polyana, in the mountains, the famous mineral water ... Open »

All about Trabzon, Turkey - sightseeings, attractions, touristic spots, architecture, history, culture and cuisine. Prepare your trip together with OrangeSmile.com - find out the 'must see' things in Trabzon, which places to visit, which excursions to take, where the breathtaking views are waiting for you. Planning your trip with this travel guide will help your to get the most out of Trabzon in few days.