Detailed hi-res maps of Kobe for download or print 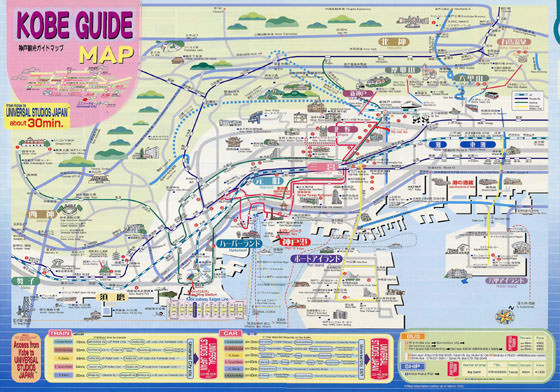 The main means of transportation for the Japanese is railway networks. The total length of the railways is 29,000 kilometers. Here, trains are considered the most popular and fastest means of transport, which runs not only within one city, but also between different cities and even islands. Japanese trains are always punctual and come in exact accordance with the schedule. The largest stations serve more than 2 million people per day. Special attention should be paid to JR trains; these are special trains that run within a particular region or city at intervals of 5-10 minutes. In order to find your way around, it is best to purchase a special guide with the routes of trains of this type. It costs from 120 yen. … Open

Today, about 45% of all functioning industries in Japan work with the help of industrial robots, which are also manufactured domestically. In Japan, there is some industrial equipment, which has no analogies in the contemporary world. Due to this, the country can receive significant privileges in the market. At the same time, the Japanese are ready to share their relatively new inventions in the field of industrial robots and annually sell at least 70,000 of these machines to other countries of the world. The unemployment rate today is approaching 5%, while in the early 90’s it was less than 3%. External debt is about 31,000 billion dollars. Inflation is about 2%, and GDP growth according to last year’s data was 2%. … Open

Search for services, infrastructure and sights on map of Kobe

Our guide chapters over Kobe

Genten stands out among many specialty stores in Kobe. it offers customers a broad range of products and accessories made of genuine leather. Ladies will be able to pick excellent handbags for themselves, while men will enjoy a large selection of purses and leather belts. All products presented in this store at attractive prices are of decent quality. Design store Kimono Board is one of the most unusual in … Open

8. The routes of special sightseeing buses running through the city cover the most iconic tourist attractions. A schedule of such buses and the location of stops can be specified in any tourist center. 9. Besides sake factories, Kobe is famous for its breweries. All beer lovers should definitely try the beer produced in the city and its surroundings. 10. It is important to keep in mind that shoes should be … Open

Kobe for children - what to visit

The Kobe City Suma Marine aquarium is very popular among travelers with children. It will please visitors with its beautiful design and a large collection of marine inhabitants. Hundreds of colorful fish, exotic jellyfish and starfish swim here in large aquariums. There is an excellent dolphinarium in the aquarium, in which exciting shows are held daily. Another unusual feature of the aquarium is the mini-zoo, … Open

The Rocco Mountains are very popular among nature lovers. They are relatively low, but very beautiful. At the beginning of the 20th century, equipping of places for country rest began. In the foothill area, many beautiful villas were built. Also, golf courses are located here. In the foothill area, there are several farms where guests are always welcome. Here, you can make many interesting hikes or ride horses. … Open

Local youth also have interesting features and traditions largely related to the variety of existing subcultures. Among young people living in Kobe, there are fans of world-famous anime, as well as modern music bands and actors. Such ardent fans try to look like they idols in all possible ways. The city has many specialized shops selling clothes and accessories for representatives of different subcultures. If … Open

One of the most popular cafes in town is Nishimurakohiten. It is decorated in accordance with the beautiful traditions of the past years. The cafe hall is furnished with massive antique-like wooden furniture, it is also decorated with exquisite fabrics. In such a special setting, one can arrange an unforgettable romantic dinner, enjoy house specialties and try fine desserts. Freundlieb Cafe is recommended to … Open