Sightseeing in Kanazawa - what to see. Complete travel guide 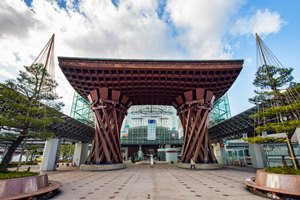 Kanazawa, the capital of Ishikawa Prefecture, is situated in the heart of the Japanese archipelago. The area where the city was built is between two rivers, namely, the Sai and Asano. Besides that, Kanazawa is situated on the coast of the Sea of Japan. It is hard to put into words how picturesque local nature is. It is virtually impossible to find another city in the world where ancient so peacefully coexists with modern. Miraculous old temples with their centuries-old history border with modern universities, colleges, and academies. Thanks to such a large choice of educational facilities, Kanazawa is often recognized as the intellectual center of Japan.
The history of this region started more than five centuries ago. At that time, there was a religious group called Ikko that practiced Buddhism. Buddhist monks from this group were the first people who built a temple on the site of modern Kanazawa. They called it Kanazawa Gobo. In the 80s of the 16th century, the new settlement got a ruler – Maeda Toshiie.
Coming from the Maeda samurai clan, Maeda Toshiie was an educated ruler with excellent management and organizational skills. He made Kanazawa a well-developed city with the blooming economy that was not inferior to such large Japanese cities as Kyoto and Tokyo. Taking into consideration all regions in Japan, Kanazawa occupies the fourth place in the list of the most developed cities in the country. The region almost didn’t suffer any damage from airplane attacks during World War II. This helped Kanazawa to retain its historical look and save many architectural landmarks until modern time. Copyright www.orangesmile.com
Without a doubt, Kanazawa Castle is the main attraction of this Japanese city. The city of Kanazawa grew around this castle. The Maeda family was the founder of the gorgeous building. Each new owner was adding additional details to the construction depending on own taste and preferences. This is how the castle was growing in size, getting new floors and supporting buildings. The Kanazawa Castle was reconstructed several times. It suffered much damage during a fire that took place in the late 50s of the 18th century. 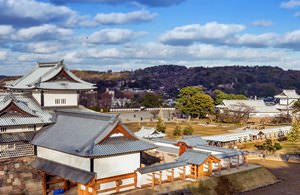 The gorgeous building has an interesting detail – a roof made of lead. The choice of the material was not random. First, lead was immune to fire damage, and, second, soldiers could make bullets from the roof in case of a castle siege. Kanazawa Castle looks like a well-protected fortress with guardian towers, earth wall, arrow loops, and special hidden areas where soldiers could hide and then attack their unprepared enemies.
Do you want to visit the most mysterious building in Kanazawa? Include a visit to Myoruji Temple into your vacation plan in this case. At a glance, this is an ordinary Japanese building consisting of two floors with low ceilings. However, once you step inside you quickly realize that this is a true labyrinth. The temple has not two but four floors with twenty-three rooms, twenty-nine stairs, and an underground passage that leads to the “heart” of the city – Kanazawa Castle. In the past, the temple had another name – the Ninja Temple – because of hidden rooms where warriors were polishing their fighting skills. Tourists can see some ninja tricks during an excursion in the temple. 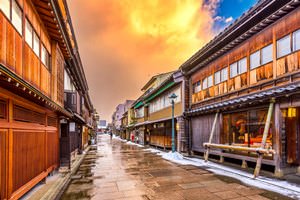 The Myoruji Temple was built at the end of the 80s of the 16th century. The temple was also a protective building against attacks of the hostile Tokugawa clan. All secret rooms inside the building including hidden passages and numerous stairs were made as a trap for the “uninvited guests”. There were such traps as rotating floors, stairs with hidden spears, doors with self-activating locks, and many other “unpleasant” surprises. These traps could buy time for Kanazawa people and let them escape. There are stories that not all traps have been deactivated in the temple and some traps are still functioning. Be careful when visiting this building.
The biggest garden in Kanazawa, Kenroku-en, is literally the “Garden of the Six Sublimities”. Its twenty-five-acre large territory is home to more than nine thousand different trees and plants. The garden is often in bloom because there are many flowers here – more than one hundred and eighty different species to be precise. When taking a stroll in the garden, visitors admire the gorgeous waterfall. Don’t forget to attend a true landmark of the park – a charming tea house. 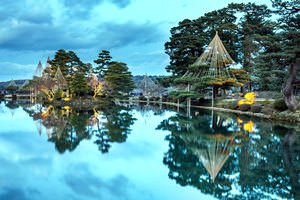 Tourists can get to Kanazawa from Tokyo. There is a daily train from Japan’s capital that goes in the right direction. The journey time is roughly four hours. It is also possible to travel by bus but it will take almost eight hours to get to this Japanese city by this means of transport. The airplane is the fastest way – travelers can fly from Tokyo to the nearby city of Komatsu. A bus ride from Komatsu to Kanazawa lasts only forty minutes.
This guide to iconic landmarks and sights of Kanazawa is protected by the copyright law. You can re-publish this content with mandatory attribution: direct and active hyperlink to www.orangesmile.com.

Survived castles around Kanazawa
♥   Castle 'Kanazawa Castle' Kanazawa, 0.5 km from the center. On the map

♥   Castle 'Maruoka Castle' Maruoka, 57 km from the center. On the map

National and city parks around Kanazawa
♥   Prefectural Natural Park 'Goishigamine' , 44.2 km from the center. On the map

Art galleries in Kanazawa and around
♥   Art museum '21st Century Museum of Contemporary Art' Kanazawa, 0.2 km from the center. On the map

Sights around Kanazawa from our guide 'Extreme places on Earth' 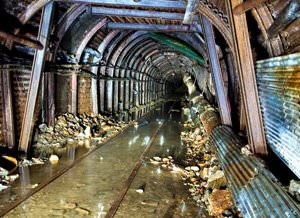 Distance from Kanazawa center - 59.4 km.
Dripping water and rusty rails used for transporting ore a few years ago give these places very mysterious and sinister look. Shadows from abandoned locomotives and drilling machines add some fear. Some land mines look quite well-organized, while others are embraced with criss-crossing networks of rusty floors and partially inundated with stones from crumbling walls. In the middle of the last century, mining camp residents began to suffer from diseases unknown to science. As it turned out later, their cause became vapors of cadmium salts, which over the years of production ore have been soaked the earth of the island. Today entrance to the village Kamioka is officially closed, but that doesn’t bother hundreds of curious tourists. … Read further 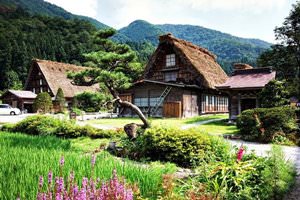 Distance from Kanazawa center - 39.4 km.
The lifestyle in the village of Shirakawa-go has remained unchanged over the years. Not so long ago, the village was declared a UNESCO World Heritage Site. A couple of decades ago, almost no one knew about the existence of the old Japanese village that was founded in the 12th century. Now, the place is regularly visited by tourists who want to enjoy the unique architecture and observe the measured way of life of the indigenous population. There are many amazing natural attractions in the immediate vicinity of the village. Those include centuries-old forests with rare trees and plants. … Read further

Search touristic sites on the map of Kanazawa

Sightseeing in regions nearby Kanazawa

Nagano
Not far away from the city is located one of the most notable historic sites - Kawanakajima field. It was the witness of five major battles. Nowadays here is installed a statue in the memory of those, who fell in these battles. The monument depicts the events of 1561 and shows the fight of samurai warriors who led the warring clans. Chubu Sangaku National Park is one of the ... Open »
Nagoya
The city surroundings are also rich in interesting attractions. Despite the fact that Nagoya has a status of the large industrial center of global significance, fans of ecotourism will not be bored too. The surroundings of the city are a trove of wonderful nature attractions and interesting outdoor museums. One of the most popular places attracting nature admirers is the ... Open »
Kyoto
One more traditional sight of this region that is usual for ancient Japanese towns is stone garden. The most famous stone garden is located in Ryoanji monastery. On a square area covered with gravel are located big stones. Every viewer has own impression after observing this panorama. Some people say the stones resemble mountain hills covered with mist, while others see the ... Open »
Osaka
Tempozan Village is the main entertainment center of the city. Here you can make a ride on the largest Ferris Wheel and try other attractions. One of the oldest shrines - a Buddhist temple named Shitennoji – can be founded on the southern part of the city. Every year the last week of April is a time of a big celebration in the temple. The celebration is accompanied by a ... Open »
Kobe
Shopping lovers should not forget to visit Yamato street. Here you will find numerous trading pavilions devoted to different themes and traditional Japanese restaurants. You can view the panorama of the city and its coastal line from the observation area of the port tower. Each day three thousands of tourists visit this area to enjoy the magnificent look of the port and ... Open »
Niigata
The temple of Hakusan, which was founded 400 years ago, is one of the oldest monuments. Among the modern buildings we recommend visiting Gokoku Shrine, which is particularly popular among young couples. The reason for this is in the fact the temple is dedicated to the god, who protects family. Nature lovers should make a walk in the park, which is sometimes called "Danish". It ... Open »

All about Kanazawa, Japan - sightseeings, attractions, touristic spots, architecture, history, culture and cuisine. Prepare your trip together with OrangeSmile.com - find out the 'must see' things in Kanazawa, which places to visit, which excursions to take, where the breathtaking views are waiting for you. Planning your trip with this travel guide will help your to get the most out of Kanazawa in few days.