Detailed hi-res maps of Kanazawa for download or print

The actual dimensions of the Kanazawa map are 2832 X 1240 pixels, file size (in bytes) - 866673. You can open this downloadable and printable map of Kanazawa by clicking on the map itself or via this link: Open the map. 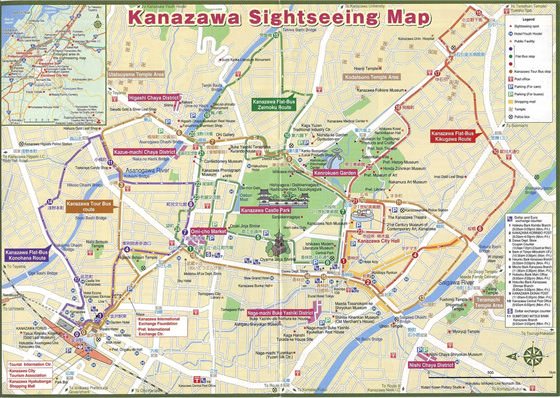 The actual dimensions of the Kanazawa map are 1745 X 1241 pixels, file size (in bytes) - 913228. You can open, download and print this detailed map of Kanazawa by clicking on the map itself or via this link: Open the map.

The main means of transportation for the Japanese is railway networks. The total length of the railways is 29,000 kilometers. Here, trains are considered the most popular and fastest means of transport, which runs not only within one city, but also between different cities and even islands. Japanese trains are always punctual and come in exact accordance with the schedule. The largest stations serve more than 2 million people per day. Special attention should be paid to JR trains; these are special trains that run within a particular region or city at intervals of 5-10 minutes. In order to find your way around, it is best to purchase a special guide with the routes of trains of this type. It costs from 120 yen. … Open

One of the main exports of Japan is automotive products. There are a lot of factories on the territory of the country that are engaged in the automotive industry. The largest brands are Suzuki, Mitsubishi, Toyota, Mazda, Nissan and Honda. The main branches of agriculture are plant growing and fishing. In terms of crop production, rice tops the chart. After all, rice as you know, is the national product of all Japanese. Thanks to specially developed technologies for planting rice, at the end of the last century, the Japanese achieved an incredible economic miracle. As a result, the incomes of the local population have increased significantly. Consequently, the demand for rice has also increased, although in the early 2000s, the amount of agricultural land decreased slightly. This resulted to an acute shortage of rice in some regions. Today, about 23% of the gross output of the rural population precisely profits from growing the national product. … Open

Search for services, infrastructure and sights on map of Kanazawa

Our guide chapters over Kanazawa

The gorgeous building has an interesting detail – a roof made of lead. The choice of the material was not random. First, lead was immune to fire damage, and, second, soldiers could make bullets from the roof in case of a castle siege. Kanazawa Castle looks like a well-protected fortress with guardian towers, earth wall, arrow loops, and special hidden areas where soldiers could hide and then attack their … Open

Maps of Kyoto
Another interesting holiday is the Daimonji Gozan Okuribi, which is annually celebrated in the middle of the hot August. Three days before the holidays, locals meet the souls of their deceased ancestors, and on the day of the celebration, they see them off to where they came from. This tradition is known as "Urabon'e". Lights are lit in the mountains around Kyoto (and it must ... Open »
Maps of Osaka
On July 30, locals traditionally celebrate the Sumiyoshi Matsuri Festival. All the events within its framework are held in the above-mentioned temple (Sumiyoshi Taisha). It is the last carnival of the summer season. The festival itself is a fancy-dress parade with street musicians and mikoshi (traditional palanquins in which “kami” spirits are believed to live). The ... Open »
Maps of Kobe
Kobe residents are known for their politeness and hospitality; every tourist will feel like a welcome guest in this city. Citizens have long been accustomed to a large number of tourists. To show your respect for them, you must follow the simple rules of local etiquette. First of all, it is necessary to be polite to everyone, which is always highly appreciated. Locals never ... Open »
Maps of Hiroshima
Foreign visitors may notice that locals greet each other with a bow; its depth reflects the degree of respect to the opponent. This form of greeting isn’t compulsory for foreign visitors; it would be appropriate to use a customary handshake. Those who are going to attend local religious sites should take into account several important rules. Despite the fact that pretty ... Open »
Maps of Fukuoka
It is a series of several national celebrations; traditionally the most striking and memorable holiday is Hakata Dontaku. The holiday has got its current name in the early 17th century; it is believed that it derives from the German word ‘zondag,’ which means ‘Sunday.’ Celebration begins with a parade taking place on the main avenue of the city. Lots of children are ... Open »
Maps of Sapporo
Hokkaido Shrine Festival is a Shinto event, which takes place in mid-June. It is especially popular among lovers of colorful religious processions. Costume parades start from the Hokkaido Jingu temple and run through the city center every morning for three days. Participants of the festival, dressed in the fashion of the Heian period, carry with them portable temples. It is ... Open »
OrangeSmile.com - online travel reservation expert providing reliable car rental and hotel booking services. We feature more than 25.000 destinations with 12.000 rental offices and 200.000 hotels worldwide.
Secure Server