Preparing your trip to Kobe: advices & hints - things to do and to obey 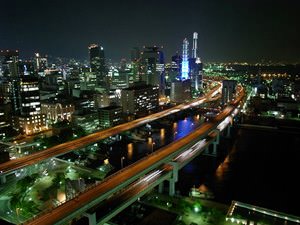 1. The most favorable period to visit Kobe is spring and autumn when it is always very warm and sunny here. In summer, it often rains and a strong wind blows, which can ruin your vacations.
2. Beach lovers should take into account that the water on the coast warms up to comfortable temperatures as early as in May. Thanks to the warm currents, the beach season in Kobe lasts until mid-October.
3. The most luxurious and expensive hotels are located on the waterfront. Budget travelers should look for suitable hotels at some distance from the coast.
4. Apart from classic hotels, the so-called "ryokans" are common in the city. Such traditional inns are distinguished by special room equipment. Instead of regular beds, the rooms feature tatami mats. Some ryokans have their own thermal baths.
5. Kobe has a modern airport, but it only accepts domestic flights. The easiest way to get to the city is with a transfer in Kansai, where there is a large international airport. Copyright www.orangesmile.com
6. Railway communication is also well-developed in the city. From Kobe Station, you can easily reach Osaka and Kyoto by train.
7. The main forms of public transport in the city are buses and the subway. By bus, you can literally get to any area, but when using road transport, you should definitely take into account heavy traffic.
Cuisine of Kobe for gourmet with top restaurants and cafe
Kobe is the birthplace of the world famous delicacy - marbled beef. This type of meat is the most expensive in the world, and you can try it only here. It is prohibited to export this meat …

Open
8. The routes of special sightseeing buses running through the city cover the most iconic tourist attractions. A schedule of such buses and the location of stops can be specified in any tourist center.
9. Besides sake factories, Kobe is famous for its breweries. All beer lovers should definitely try the beer produced in the city and its surroundings.
10. It is important to keep in mind that shoes should be removed not only at the entrance to the house, but also when visiting some public institutions. The same rule applies to some temples and museums.
11. One of the most dangerous places in town is the subway. During peak hours, crowd stampedes often happen here. Also, the subway is the main working place for pocket thieves.
12. Since Kobe is one of the largest port cities in the world, seafood is the cheapest food here. It can be tried not only in restaurants but also in the markets where open stalls often have a small kitchen.
13. Fans of tours and entertainment should take into account that many local museums and amusement parks may close quite early. Even in summer, some of them work until 4:30 pm.
14. Many famous restaurants and cafes in Kobe have their official websites where one can read a lot of useful information. Discount coupons are often freely available on such sites.
15. Kobe is considered a quite calm and safe city. You can safely walk along the waterfront and the main streets even at night.

Preparing your trip to Kobe: advices & hints - things to do and to obey You can re-publish this content with mandatory attribution: direct and active hyperlink to www.orangesmile.com.
Kobe - guide chapters 1 2 3 4 5 6 7 8 9

What to visit being in Kobe - unique sights 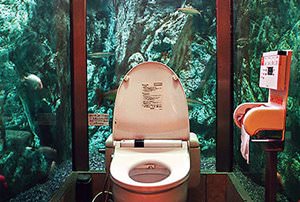 Distance from Kobe center - 16.2 km.
In this unusual aquarium the colorful fish swim. The unusual design design has not hurt the technical functionality of the toilet. While staying in this WC it seems that you are on the seabed. Everywhere you can see the quiet little fish and the interesting design installations. The unique lighting system emphasizes the original thematic spatial design. In the design toilet of the Café The Mumin Papa you will definitely want to stay for a while. … Read further 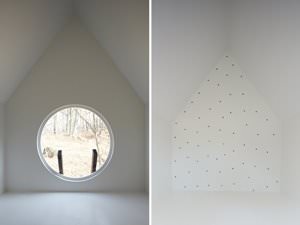 Distance from Kobe center - 28.1 km.
78 individual holes were made for birds on the facade of the house, and on the other side of the house there is one large round entrance for a person. The space inside the house is divided into two parts by a wooden partition with holes through which it is convenient to observe the birds. All visitors to the center will have an opportunity to climb a comfortable staircase and diversify the rest with an unusual event - bird watching. In addition to the original house, chic picnic areas are equipped on the territory of the Nature Reserve, and many interesting routes have been developed for hikers. … Read further

Tips for the cities around Kobe

Osaka
4. The best place to profitable exchange any currency is an airport. Cash machines charge a rather high transaction fees meanwhile banks feature a rather formal procedure which will take much time. Many hotels have currency exchange offices on their premises which commonly process a sum of 300USD or equal to it in a day. 5. All restaurant and cafes without exception as well as ... Open »
Kyoto
4. While walking around the city and visiting various excursions travelers should be very quiet. The thing is that the locals don’t like the noise and are very restrained emotionally. The rapid display of emotion or loud speech is considered a sign of mauvais ton. 5. In addition to public transport, taxi is very popular among city dwellers and tourists. Fares are moderate, ... Open »
Okayama
4. Many architectural monuments of various periods have been preserved in the historical district of Okayama. If you don't want to miss the most interesting attractions, explore this area on foot. 5. Okayama has a large train station that regularly receives express trains from Tokyo and other Japanese cities. Okayama can also be reached by bus through one of the nearest ... Open »
Hiroshima
4. Those who hope to bring a lot of photos from the trip have to remember that a free photo and video isn’t allowed everywhere. On the territory of some of attractions it can be performed only at an additional cost; in some temples making pictures is prohibited. You can shoot locals only with their prior consent. 5. Going for a walk, be sure to take a map of the hotel. ... Open »
Nagano
4. The city can offer many restaurants of various profiles. Regional restaurants are distinguished by the most attractive prices. Restaurants located in and around hotels are the most expensive. 5. Active tourists will have the opportunity to take a tour to Tokyo. Nagano and Tokyo are linked by railway. High-speed trains run between the cities. 6. Nagano is famous for ... Open »
Kanagawa
4. Tips in Kanagawa restaurants, just like everywhere in the country, are unacceptable – they will be considered an insult. That being said, if you want to thank the staff, it is better to thank them in person or write a good review of the service. 5. Be prepared to keep small litter in your bag. Trash bins in Japan are mostly located in public areas, and there are bins ... Open »

Travelling to Kobe - advices and tips. What should be provisioned in advance, the rules you might want to follow, and the things you better avoid doing in Kobe. We help you to make your trip smooth and easy, with no unexpected surprises.