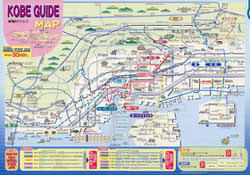 Interactive maps of hiking and biking routes around Kobe

1. You can zoom in/out using your mouse wheel, as well as move the map of Kobe with your mouse.
2. This interactive map presents two modes: 'Biking Routes' and 'Hiking Routes'. Use the '+' button on the map to switch between them.

This Kobe map has two modes: 'Railway Network' and 'Landscape & Rural Map'. Use the '+' button on the map to navigate.

Tourists in Japan will have absolutely no problems with movement around the city. The most popular form of public transport in the country is trains. The railway network reaches absolutely all regions of the country. The cost of ticket depends on the specific class of train, the direction, as well as on the time of day. It is worth mentioning such mode of transport as JR electric trains. They run every 5-10 minutes within a particular city or district. When you purchase a train ticket, it is necessary to keep it with you until the end of the trip, since you will need to re-punch the ticket at the exit. In large cities, you can move around using monorails. … Open

Most of the Japanese islands are located in a temperate climate zone, characterized by a clear division of seasons. This feature gives residents and guests of Japan an excellent opportunity to observe the change of seasons in the conditions of original landscapes and enjoy the changes occurring in nature. Many festivals organized in the country are devoted to natural phenomena. They are held throughout the year in different parts of Japan. Among the official festivals, one can single out the Emperor’s birthday. During the festivity, the Emperor, Empress and Crown Prince appear on the veranda of the Palace to meet with the people. At the end of the solemn part, everyone can come to the Palace and leave congratulatory messages for the emperor in a special book. … Open

Our guide to Kobe

Kobe is an ancient port city, an international center of trading and a large industrial region. Nowadays on the territory of this city work several factories operating in such areas as chemical and military industries. In many aspects Kobe is an important city that pays a great rope in overall prosperity of the country. The city was founded in the beginning of the 8th century. At that time it was decorated by … Open

Kobe is a treasure trove of unique architectural and historical monuments. Many old buildings and cultural centers were completely destroyed by the earthquake of 1995 but later restored by the efforts of local residents. An incredibly beautiful 19th-century historical monument is the Ijinkan, a complex of several luxurious old mansions. Once they belonged to wealthy foreign diplomats and local merchants. Now the … Open

Kobe has a lot of places for an active and interesting holiday. In the warm season, you should definitely visit Takenaka, the most beautiful park in town where more than 200 species of herbs grow. In spring it is decorated with thousands of flowers and ornamental plants. Here you can walk along special paths for hours, admiring spreading trees and landscape compositions. Apart from that, in the park, you will find … Open

Kobe beef steak & Grill Meriken Hatoba positions itself as a steakhouse so its menu is based on meat dishes. Chefs prepare a large part of the dishes over an open fire, so the taste turns out to be really special. Some types of the elite meat can be even eaten raw. The restaurant will also appeal to vegetarians, as it serves amazing vegetable dishes. Diversify meat tasting by visiting Bistrot Cafe de Paris. … Open

Residents of Kobe are characterized by a respectful attitude to their traditions, some of which date back hundreds of years. The city has become known to many travelers thanks to its Festival of Light (Kobe Luminarie), which is now one of the most interesting events in its festive calendar. For the first time, this festival was held in 1995, and the reason for its organizing was very tragic. In 1995, a strong … Open

In the city and its environs, there are several interesting factories for the production of sake, on which interesting excursions are also conducted. The Hamafukutsuru Ginjo Kobo factory is very interesting. Visitors can stroll through the shops of the factory, try the best varieties of drinks produced here, and buy gift sets of sake for loved ones at a local store. Fans of historical sites are invited to visit … Open