Detailed hi-res maps of Kamakura for download or print 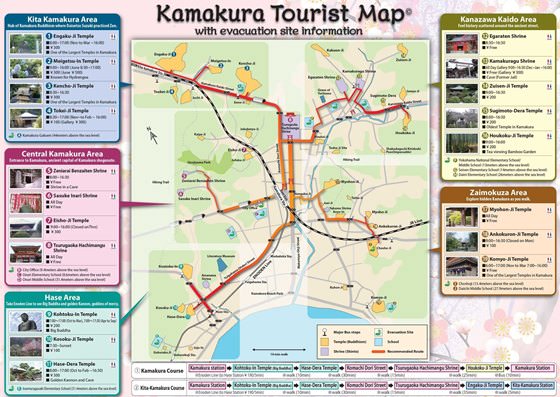 The actual dimensions of the Kamakura map are 2101 X 1489 pixels, file size (in bytes) - 712070. You can open this downloadable and printable map of Kamakura by clicking on the map itself or via this link: Open the map.

Search for services, infrastructure and sights on map of Kamakura

Our guide chapters over Kamakura

Do you want to see the main shrine in Kamakura? In this case, visit Tsurugaoka Hachimangū. Until the 12th century, this temple was a shrine of two religions, namely, Shintoism and Buddhism. The Meiji period government didn’t like that and decided to remake the building, demolishing some of its parts. Nowadays, Tsurugaoka Hachimangū is a Shinto shrine. The popular religious landmark hosts an interesting … Open

Maps of Tokyo
Tokyo is a magnificent city, where the stone jungles merge with ancient temples, latest technologies - with the ageless traditions, rich history - with futuristic prospects and innovations. Traditional folk festivals and cultural events are celebrated on a grand scale here. Festivals are accompanied by colorful folk performances, where the fun atmosphere reigns. Perhaps, the ... Open »
Maps of Kyoto
Another interesting festival taking place in the cultural capital of Japan is called Setsubun Matsuri. It is held at the beginning of February, marking the end of the winter season. Since the holiday has religious overtones, it is held in temples where theatrical performances are organized, in which some participants portray demons, while others act as deities. The latter, in ... Open »
Maps of Osaka
An interesting festival for every traveler is Toka Ebisu. It takes place at the very beginning of January, opening the festive calendar of Japan. The event is dedicated to Ebisu - this is the name of the Japanese god of fishermen and luck. To witness the carnival means to bring good luck for the next year, and that's why it is so important for citizens. During the festival, you ... Open »
Maps of Kobe
For the locals, this beautiful event continues to be a tragic memorable date, so on the festival's opening day they always observe a minute of silence to pray for the victims of the earthquake. In recent years, the beautiful holiday has expanded its program significantly. Interesting exhibitions and actions are organized within the framework of the festival, many of them have ... Open »
Maps of Hiroshima
During the meal, don’t stick chopsticks upright in the rice, as it is considered one of the most common and serious errors. According to local rules of etiquette, you shouldn’t eat on the go; eating is accepted only in designated areas, restaurants or spacious terraces of many outdoor cafes. It is noteworthy that smoking is allowed in literally any place, except for ... Open »
Maps of Fukuoka
Fukuoka never ceases to attract tourists who like to rest in large modern cities. It is a thriving metropolis, one of the ten largest and most densely populated cities in the country. Surprisingly, modern and rapidly developing city has managed to preserve the cultural heritage of past centuries. Many travelers arrive to the city at the beginning of May, when the Golden Week ... Open »
OrangeSmile.com - online travel reservation expert providing reliable car rental and hotel booking services. We feature more than 25.000 destinations with 12.000 rental offices and 200.000 hotels worldwide.
Secure Server