Detailed hi-res maps of Hiroshima for download or print 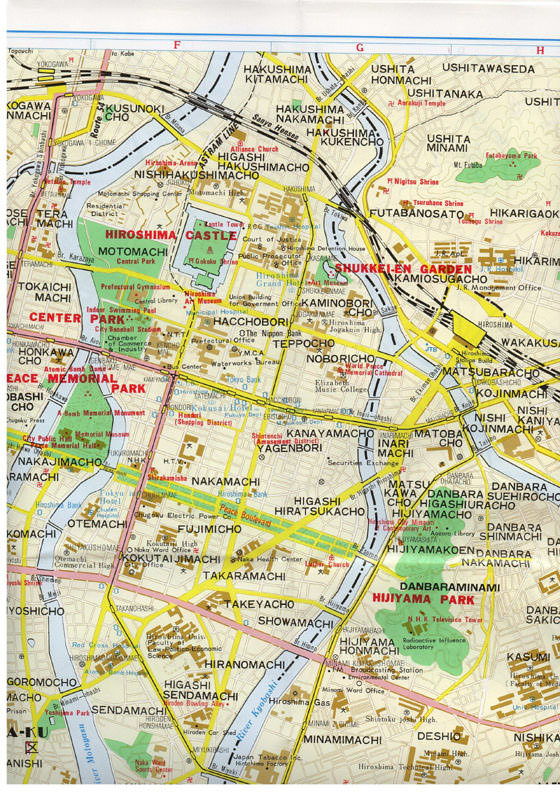 The actual dimensions of the Hiroshima map are 2480 X 3507 pixels, file size (in bytes) - 1893778. You can open this downloadable and printable map of Hiroshima by clicking on the map itself or via this link: Open the map. 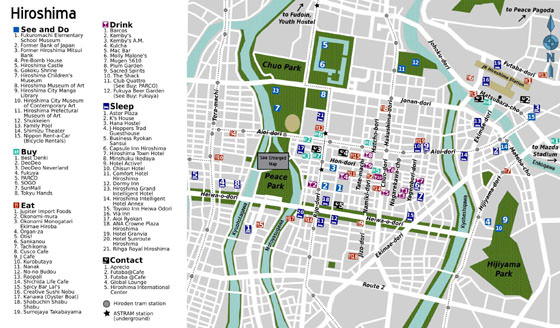 A specific mode of transport in Japan is a monorail, which is designed for intracity travel. The trains are fully automated and operate without drivers. Such trains operate in the largest cities of the country, including Tokyo. Tickets for them must be purchased separately from that of the railway trains. The length of roads is more than 1,000,000 kilometers, while those with a hard surface in the country are about 810,000 kilometers. The express road is about 6,000 kilometers. It is possible to use the service of a taxi or rent a car. Air transportation has become the most popular means of transportation in Japan. The main center is Haneda Airport. Due to the territorial location of Japan, sea transport is also popular. Tourists can use ferries, ships, liners and catamarans. … Open

The Japanese economy today is among the five most developed economic structures in the world. But the Japan’s share of the global GDP is constantly decreasing. The financial system is going through a rough time. A significant contribution to the current economic state of the country was made in the post-war years, when the Japanese began to actively engage in the development of technology and skill, as well as their import. Thanks to the most powerful research base, Japan can independently export robotics, various electronics, automobiles, ships and aircraft, and so on. Any Japanese product is considered a priori of high quality. It was possible to achieve such sales at market thanks to incredibly cheap labor. … Open

Search for services, infrastructure and sights on map of Hiroshima

Our guide chapters over Hiroshima

Hassei is considered to be one of the best restaurants in the city; its visitors can taste all possible kinds of national foods and drinks. The name of the Okonomimura restaurant speaks for itself; popular flatbreads are cooked there in dozens of variations. The wine bar Totide Wine invites visitors to have a break from Eastern cuisine; it serves popular varieties of European wines and delicious pizza. It’s … Open

The reminder of the tragic events taking place in August 1945 is the Genbaku Dome. This is a historical construction crowned with a big globe dome. It is very surprising that the historic building is only 16 meters from the epicenter of the atomic bomb explosion and managed to survive. The building has not been intentionally reconstructed, so you can admire the same construction as it was after the explosion. The … Open

1. Holiday-makers should take into account that tipping isn’t accepted at local restaurants and other leisure centers. The service charge is usually included in the total score and rarely exceeds 10 % of the amount of services rendered. Tips to maids in a hotel are also not accepted. 2. Hiring a car is worth only for those who believe that they can adapt to the unusual left-hand traffic. Road signs are … Open

Those who want to bring back some interesting edible gifts should look into one of the many pastry shops. They sell delicious Momiji manju cakes with bean filling. Beautiful crafts made of glass and various items like chopsticks, trays of exquisite paintings, copper and amulets remain usual souvenirs. Tourists who aren’t used to end entertaining after dark have to pop into one of the local clubs or bars. The … Open

Another interesting church of the 14th century is Fudoin Temple; it is one of the few sanctuaries that have survived the bombing. The bell tower and the gate of the temple have survived in their original form; now they are of great cultural value. The Hiroshima Museum of Art invites tourists to distract from the tragic history of the city and enjoy the beauty of exquisite paintings. Its collection includes works by … Open