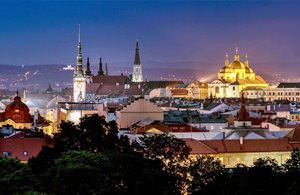 Located in the center of the European continent, the Czech Republic shares borders with Germany, Poland, Slovakia, and Austria. A relatively small area of the Czech Republic includes various landscapes and reliefs. Most parts of the country have uplands, plateaus, and mountains of medium height. The territory of the Czech Republic can be divided into 3 parts: Moravia, Bohemia, and Silesia. The region of Bohemia located in the west of the country lies in the valleys of the Elbe and Vltava rivers. On three sides it is surrounded by mountains. Moravia, which occupies the eastern part of the Czech Republic, is also surrounded by low mountains and located between the rivers Morava and Oder. The entire territory of Silesia is situated in Sudetes Mountains. Thus, the center of the Czech Republic is occupied by plains, a chain of mountains stretches along its borders. In the south of the country are many ponds and various hydraulic structures.
National traditions and mentality of people in Czech Republic
The Czech Republic has a rich culture and a complicated history. The latter is reflected in the character of Czechs - they are typically quite private …
Read further
A relatively small territory of the state accommodates a really huge number of reserves - as many as 1350! Nature reserves occupy over 12% of the entire Czech territory. The country also has 3 national parks. These are the Czech Switzerland, the Krkonoše, and Šumava. Environmental protection is not empty words for Czechs. They've managed to preserve ecosystems on their territory in excellent condition. That is why the present-day Czech Republic is home to about 90 species of fauna, over 100 species of birds, 13 species of reptiles, and more than 1000 representatives of the flora.
Near the Czech-German border in the north-west of the Czech Republic you can find the youngest national park Czech Switzerland founded in 2000. Pravčice Gate became the central attraction of the Czech Switzerland. It is a 16-meter-high sandstone arch. But people come here not only for its sake. Mountaineering enthusiasts often delight themselves with climbing the local mountains. Thrill seekers can go rafting along mountain rivers or rent a bike to master cycle trails, some of which reach up to 300 meters in height. Ordinary tourists enjoy hiking on numerous routes of varying difficulty. Copyright www.orangesmile.com
Czech Republic cultural sights. What to see?
Due to its eventful history, the Czech Republic is filled with picturesque, unique and interesting places attracting crowds of tourists. Charles …
Read further
The Krkonoše Park founded in 1963 became the most famous Czech national park. It is located 130 kilometers to the north-east from the capital. The park covers 186,000 square kilometers. The purpose of its creation was the protection of pine forests and the origins of many rivers. Only a quarter of the entire area of the park is open to the public. However, it is quite enough for tourists. When visiting the park, one can admire such mountains as Snezhka, Luční, Studniční. The heights of their peaks reach 1500 meters above sea level. The Krkonoše Mountains surprise visitors with numerous waterfalls, mountain lakes with clear water, and a rich diversity of flora and fauna. Over 1,250 different plant species grow in the park, there are 240 mammal and 590 insect species. 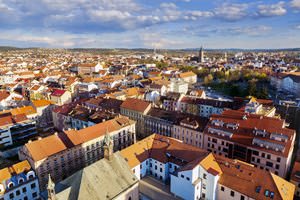 The Šumava National Park is recognized as the largest Czech forest land. It stretches 150 kilometers along the Czech-German border. Most of the park's mountain range is covered by a dense forest. The park occupying an area of 685 square kilometers was included in the list of UNESCO biosphere reserves in 1990. The Kašperské Mountains are part of the park where areas of glacier retreat have been preserved by mother nature. Tourists have a great time relaxing by one of the five large lakes. The territory of the park is perfect for hiking in the fresh air. Fans of outdoor activities will have a chance to go rafting, skiing or mountaineering. The Šumava offers great wildlife photography opportunities. The park, formerly hunting lands, is inhabited by a small number of animals - just about 70 species. However, nearly 80% of the Šumava area is occupied by beautiful forests, plains of foothills, and marshes.
Things to do in Czech Republic - active leisure
Nightclubs in the Czech Republic are not very different from clubs in other European countries. Popular “Roxy Prague” in the Old Town can still be …
Read further
The White Carpathians Reserve has long become popular around the world. Its territory spreads on the Carpathian slopes in the eastern part of the Czech Republic. The area of the reserve included in the list of UNESCO reserves in 1996 is 715 square kilometers. Over 2000 species of plants can be found on a relatively small protected area. This number includes 44 endangered species. Some plants are recognized as endemic and listed in the Red Book. The reserve has such resorts as Uherský Brod, Uherské Hradiště, and Zlín famous for their healing mineral springs.

This article about nature and national parks of Czech Republic is protected by the copyright law. You can re-use the content, but only under the condition of placement of an active link to www.orangesmile.com.
Czech Republic guide chapters 1 2 3 4 5 6 7 8 9 10 11 12 13 14 15 16

Prague
Continue your observation of the city and its architectural landmarks by visiting Belvedere Palace. The palace is the most beautiful building in the city and a gorgeous example of the Renaissance style. The construction of the palace took place by order of King Ferdinand; the building is distinguished not only by fantastic design of the facade, but also by luxurious interior of its premises. Belvedere is located next to a beautiful park, on the territory of which is located one more important … Read more

Karlovy Vary
The castle is located on a rocky promontory above the Tepla River. Several centuries ago an important trading route was located here. For many years the castle remained the main protective facility of the region. This was the place where traders brought the customs fee. Not so long ago a reliquary was found in the territory of the castle. The treasury and main hall of the castle were repaired and now they are available to the public. Loket Castle is an important architectural monument of the … Read more

Brno
Freedom Square is a perfect place for unhurried walks. You will be amazed by beautiful old buildings located near it. Yet several centuries ago the square was the main place of meetings of merchants and artisans. Nowadays you will see cozy restaurants and cafes instead of outlets and stalls. A visit to St John's Church is an obligatory part of excursion program of any tourist. The walls of the church keep a beautiful organ, the age of which is more than one hundred years. The sight is very … Read more

Plzen
Episcopacy building can be called the most effective monument of Baroque style without any doubts, and great synagogue building was built in original moor-romance style. The great cultural city’s establishment is Brewing Museum, all the city’s guests visit it. Brewing trips are also popular for curious tourists and it will impress people who are even indifferent to beer. There is the Plzen Dungeon entrance on the museum’s territory – it is dimensioned system of passages, which pierces … Read more

Ostrava
Near Masarykove Square is one of Ostrava's most beautiful architectural monuments - the Old Town Hall (Stará Radnice). The picturesque building with a beautiful tower was erected in 1539 and served its intended purpose until 1930. In the first half of the 20th century, the city got a new City Hall building so it was decided to open a museum in the old one. The last major reconstruction of the building was carried out in 1875. The latter has remained virtually unchanged since then. Currently, … Read more

Liberec
In the 17th century, a monastery was founded in the castle and some important relics were brought here. Bezděz became a pilgrimage center, every year it was visited by over 40,000 people. In 1932, the castle became a property of Karl Wallenstein, a descendant of one of the fortress' last owners. A large-scale reconstruction that has begun under his guidance is still ongoing. The fortress stands on a hilltop so during the tour travelers will have the opportunity to check some excellent … Read more