Sightseeing in Kromeriz - what to see. Complete travel guide 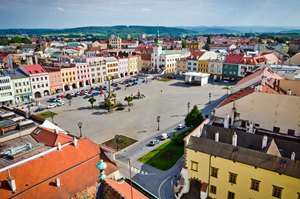 Approximately twenty kilometers from Zlin lies the gorgeous Czech town of Kromeriz. In the past, this was the bishop’s residence town. Nowadays, Kromeriz is a peaceful and tranquil settlement that attracts tourists from all over the world with its beautiful castle and picturesque gardens. Not long ago, the government put the town under its protection and proclaimed it the most beautiful area in the Czech Republic. This land is rich in historical heritage that tourists will, without a doubt, be interested in exploring.
First inhabitants in the territory of modern Kromeriz appeared yet during the time of Great Moravia. However, the first mentions of this settlement in the official documents date back to 1110. The documents name Kromeriz a small village that Bruno von Schauenburg, the bishop of Olomouc, purchased. Thanks to a beneficial location at the crossing of important trading routes, the village officially became a town in the 60s of the 13th century. King Ottokar II of Bohemia made an order to change the status of the settlement.
Kromeriz supported the Hussites during the Hussite War. The town became a bishop’s property again only at the end of the 50s in the 15th century. Eleven years later, the war between Bohemia and Hungary started. Kromeriz became the epicenter of the bloody battles. Unfortunately, this caused much damage to the town. However, Kromeriz managed to become one of the leading centers of politics and culture in Moravia at the beginning of the 17th century. The Thirty Years’ War, which started soon after that, brought the Swedish army to the town. Once again, Kromeriz suffered much damage during the war. Bishop Karl II von Liechtenstein-Kastelkorn rebuilt the town. Copyright www.orangesmile.com
Sv. Morice Kostel (St. Moritz Church) is one of the three main churches in Kromeriz. It is often recognized as the biggest Gothic architecture building in the Czech Republic. Bruno von Schauenburg, the bishop of Olomouc, was the founder of the church. For centuries, local people have considered him the founder of Kromeriz. The bishop’s tomb is located in this kostel. The St. Moritz Church was damaged several times during numerous battles, which took place in Kromeriz. However, it was carefully restored each time. Historians still argue about the original elements of the church and the details added during numerous restorations. 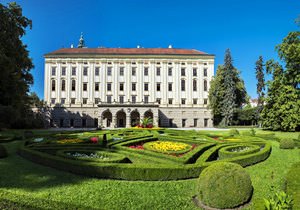 The kostel currently keeps multiple precious artifacts including the relics of Saint Vitus, Saint Morice who the bishop of Olomouc particularly praised during his life, and the relics of Saint Stephen. Monks, who work in the church, live not far from the main building of the shrine. The monks’ houses are located on the same square with the church and form a gorgeous Renaissance ensemble. The residence of bishop was in the yard. It had a passage connecting the residence with the church, so the bishop could comfortably reach the church for the divine service.
A giant castle that shares its name with the town remains one of the major landmarks of Kromeriz. Bishops and archbishops of Olomouc liked this building a lot, and so they made the majestic castle their residence. Kromeriz Castle was built in the 11th century. Initially, this was a gothic building, but the castle got traits typical for the Renaissance architecture later. The castle became even more comfortable to live in. The complex got new buildings connected to each other by multiple galleries. 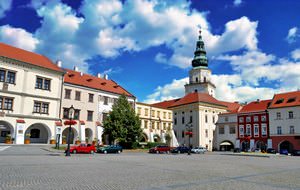 A beautiful garden occupied the territory between the building and the bank of the Morava River. The garden had numerous flowerbeds, manmade ponds, and benches in silent parkways. Moreover, there were special pavilions that were suitable for various events. The garden has kept most of these elements, so it is incredibly pleasant to take a stroll here. All tourists are welcome to relax in the garden and admire its unforgettable beauty. Besides the fabulous garden, Kromeriz Castle has one more treasure – a large collection of paintings exhibited in the local gallery. The collection features the works of many talented Czech painters.
Do you want to learn about the history of Kromeriz? For this purpose, visit the Museum of Kromeriz that is open on Velke Square. This cultural landmark is conventionally divided into several parts. In the basement, visitors can learn more about the history of the town. Educational films on special screens and collections of archaeological findings provide visitors with information about the first prehistoric settlements that appeared in the territory of the modern town. 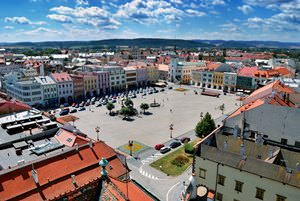 Visitors can also learn how different crafts were developing in the settlement and what treasures local pavements hide. The first floor of the museum is an art exhibition that illustrates how diverse the town and the country are. There is a separate hall dedicated to the flora and fauna of the Zlin region.
There is no way to get directly to Kromeriz at the moment. The easiest way to get here is to fly to Brno and then change to the bus that goes to Kromeriz. You will reach the town in just one hour. It is also possible to travel from Prague. In this case, tourists need to make a change in Olomouc, Zlin or Brno. Having reached one of these cities, simply get on a bus to Kromeriz.
This guide to iconic landmarks and sights of Kromeriz is protected by the copyright law. You can re-publish this content with mandatory attribution: direct and active hyperlink to www.orangesmile.com.

City tours, excursions and tickets in Kromeriz and surroundings

Survived castles around Kromeriz
♥   Castle 'Vršatec Castle' , 60.1 km from the center. On the map

National and city parks around Kromeriz
♥   Landscape Park 'Park Krajobrazowy Góry Opawskie' , 110.4 km from the center. On the map

♥   Landscape Park 'Śnieżnicki Park Krajobrazowy' , 111.4 km from the center. On the map

Czech Republic is an old country that is home to numerous old buildings, magnificent castles and fortresses. Main tourist routes include visits to the most famous landmarks, any of which has its unique history and many legends. It’s worth mentioning the most famous sights of the country, visiting which always leave travellers pleased and helps learning more about Czech Republic and its history. … Open

Search touristic sites on the map of Kromeriz

Sightseeing in regions nearby Kromeriz

Olomouc
The sacred building changed its look more than once over the centuries. As each renovation brought new elements to the building, the solid-looking cathedral that we can see today is an interesting combination of Romanesque, Gothic, pseudo-Gothic, and Baroque architectural styles. The cathedral exhibits an important relic – a treasury box shaped like the Biblical Ark with ... Open »
Brno
Brno is an ancient Czech city that is rich in different traditions and customs. This place is also known as the largest winery center of the country. Brno has a long history and sometimes this place is called “the city of wrong time”. Such name is connected with an interesting historical fact. The city was attacked by Swede in the 17th century. The inhabitants of Brno tried ... Open »
Trencin
First mentions of this city date back to the 2nd century, when the Romans have created a fortified settlement Levkaristos on the place of the modern Trencin. In the beginning of the 11th century a fortress was built on the territory of the settlement. The owner of this place was a feudal lord Slovak Matos Chuck Trencin. The city got its name thanks to this fortress, which has ... Open »
Ostrava
Ostrava is one of the oldest cities in the country, first mentions of which appeared in 1267. Ostrava was located on the crossroads of important trade routes, so until the 18th century it was known as a major trading city. Later deposits of coal were discovered on its territory. This fact has greatly fastened the industrial development of the region. Today several ... Open »
Kremnica
Besides the mint that is located in Kremnica Castle, there is a similar cultural venue in the city. It is open in the merchant’s house on the main square of Kremnica. Tourists like this establishment because they can see a large collection of antique items that the local mint was once producing. Some exhibits are relatively new – the mint sometimes manufactures coins for ... Open »
Banska Bystrica
When exploring inner passages of the castle, it is still possible to see scars left by ammo. These are proofs of the difficult times in the history of the town during the medieval period. During a two-hour-long excursion, tourists can learn more about the history of the region and visit the castle’s halls that still have religious artifacts and household items of monks who ... Open »

All about Kromeriz, Czech Republic - sightseeings, attractions, touristic spots, architecture, history, culture and cuisine. Prepare your trip together with OrangeSmile.com - find out the 'must see' things in Kromeriz, which places to visit, which excursions to take, where the breathtaking views are waiting for you. Planning your trip with this travel guide will help your to get the most out of Kromeriz in few days.