Sightseeing in Karlovy Vary - what to see. Complete travel guide 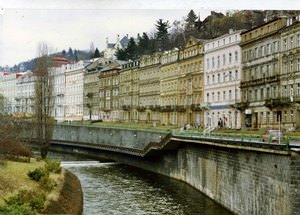 The rest in Karlovy Vary is always active and diversified. The opposite is simply impossible as in this city are gathered large number of cultural facilities, historical and architectural sights. In order not to lose even a single day of your vacation, pay your attention to the main sights of the resort that may be interesting for you.
Your active city break in Karlovy Vary. Attractions, recreation and entertainment - best places to spend your day and night here
Karlovy Vary is famous for its spa complexes, many of which started serving visitors in the beginning of the 20th century. Lazne is considered the oldest health center of the resort. The …

Open
Museum and Factory Moser is one of the most famous facilities in Karlovy Vary. The main sphere of this factory is the creation of items made of glass, so here visitors can get acquainted with the technology of this process and exhibits collections or crystal tableware. Karlovy Vary Local History Museum will provide you with information about the history of this place and its development. The first floor of the building has been turned into a gallery exhibiting works of famous painters and a small collection of old books.
People, who enjoy quality liquors, should definitely visit Museum of Jan Becher, where they will be able to get information about the production of the most popular alcohol drink in the country. Of course, such excursion to the specific museum will be not complete without trying the liquor. You can do this in one of the museum’s bars. Church of Peter and Paul is one of the most famous religious sights of this region. The church has several icons that have been presented by Nicolai II. The local art gallery will definitely capture your attention. The collection of the gallery started forming yet in 1953. Besides the regular exhibition the walls of the gallery regularly hold various events like theatre performances, exhibitions and concerts. Copyright www.orangesmile.com
Advices to travellers: what you should know while being in Karlovy Vary
1. Karlovy Vary is distinguished by a great public transport system. It’s very simple to navigate through the city by bus. If you need to go to suburban areas, high-speed trains will …

Open
The most unusual sights of Karlovy Vary is, probably, the Japanese Stone Garden. Here you can dive into the atmosphere of solitude and calmness. The garden is a perfect place for meditation and its look traditionally amazed visitors by its elegance. 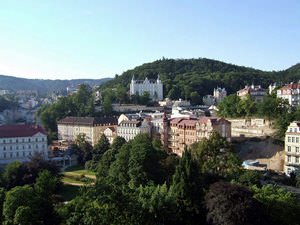 Those who like hiking should definitely go up to the top of Druzhba Hill. There is an interesting historical attraction - the lookout tower of Diana here. At the top of the hill, there is a scenic park with rest areas, and several restaurants and cafes. The tower is equipped with a beautiful observation deck, from which it is convenient to admire the surrounding forests and green hills.
Extraordinary weekend in Karlovy Vary - unusual places, services and attractions for travel gourmet
…

Open
An important monument of architecture is the Mill Colonnade. Built in the 19th century, it represents a unique combination of Neo-Renaissance and Empire style. Within this beautiful building with arches, there are several mineral springs. To try out the water from them is completely free of charge. In the warm season, the architectural complex complements the diversity of exotic plants. 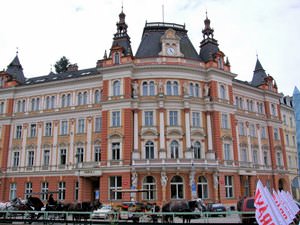 Visiting of religious sites should be included in the tour. One of the most beautiful in the city is the Church of St. Mary Magdalene. Its construction began in the late 18th century, and the very first church on this site was built in the 15th century. In the 18th century, the church was almost completely destroyed by fire. Its restoration lasted for several decades and was finally completed in 1861. An equally impressive religious building is the Saints Peter and Paul Cathedral. It was built in the 19th century and became the first Orthodox Church on the territory of the Austrian Empire. In 1916, during military operations, the church was closed, and worship services began again, only in the middle of the 20th century. Not so long ago the historical church was completely restored. Now it is in the territory of an incredibly beautiful park. Fans of theatrical art should definitely visit the Karlovy Vary City Theatre. The building in which it is located, was built in the 19th century by the project of famous architects G. Helmer and F. Fellner. At the moment, it is one of the most beautiful in the city. Earlier in its place, was an old theater but its wooden building was completely destroyed by fire in 1787. One of the main initiators of the construction of the new theater was D. Becher. A new luxury building was built on the donations of residents. The old theater managed to preserve not only its unique appearance, but also the interior decoration. It regularly hosts classical and modern productions.

This guide to iconic landmarks and sights of Karlovy Vary is protected by the copyright law. You can re-publish this content with mandatory attribution: direct and active hyperlink to www.orangesmile.com.
Karlovy Vary - guide chapters 1 2 3 4 5 6 7 8

Survived castles around Karlovy Vary
♥   Castle 'Burg Scharfenstein' , 55.4 km from the center. On the map

National and city parks around Karlovy Vary
♥   National Park 'Bayerischer Wald' , 144.3 km from the center. On the map

Sights around Karlovy Vary from our guide 'Extreme places on Earth' 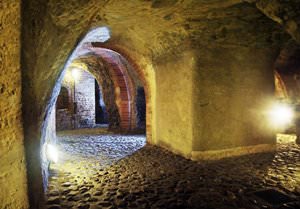 Distance from Karlovy Vary center - 62.7 km.
Walking around the undergrounds, you can see a lot of saved technique equipment, the sewerage system, dumb wells and even huge wine pipes. It is quite hard to walk alone in the Plzen undergrounds, tunnels are rather twisted and it is easy to get lost. A walk with an organized excursion is much better. With a group of tourists, you will see outstanding places of the underground city and know about the original purpose of different facilities. … Read further 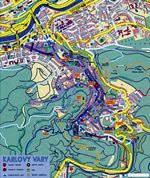 Search touristic sites on the map of Karlovy Vary

Sightseeing in regions nearby Karlovy Vary

Marianske Lazne
The total length of the architectural landmark is roughly one hundred and twenty meters. The base is represented by the cast iron carcass. It was not a simple task to keep this carcass until the modern time because there were plans to use the metal part for military purposes during the war years. The colonnade remained forgotten for many years and was thoroughly repaired only ... Open »
Plzen
Despite the fact that Plzen was badly damaged during the Second World War, a part of the cultural and historical heritage was saved. One of the main attractions is located in the center of the city. This is the Church of St. Bartholomew. The height of one of the church’s towers reaches 102 feet. This is the tallest building in the country. Several more old buildings can be ... Open »
Zwickau
St Mary's Cathedral was built in 1200. During its history it has survived in several fires, but each time it has been restored. Nowadays the cathedral is still made in the style of the 15th – 16th centuries. The cathedra (Renaissance style) and altar with a cross made of crystal (late Gothic style) are the main decorations of the cathedral. Don’t forget to look at ancient ... Open »
Prague
Prague is one of the most beautiful cities in the world. The city is divided into two parts by the Vltava River. Together with Athens, Rome, Paris and London, Prague belongs to the oldest metropolises of Europe. Nowadays, its former beauty is back - access to all the sights is open again, and the restoration work of the most important monuments and historic buildings has been ... Open »
Dresden
The Zwinger Palace. Augustusbrücke Bridge features a truly wonderful panoramic view of the historical buildings and the ancient part of the city. This view inspired Bellotto to create many marvellous paintings that are now kept in Dresden Art Gallery in the Zwinger Palace. The large collection of the world-famous gallery also contains works of Dutch painters and numerous ... Open »
Leipzig
Among the sights of the Leipzig are also the Church of St. Thomas built in the gothic style, in which worked the great German composer I.S. Bach, where he managed the church chorus; Supreme Court; Leipzig Gewandhaus that is also the location of the local philharmonic; Monument of Fight of the Nations that features an observation area that is 91 meter high – the tallest ... Open »

All about Karlovy Vary, Czech Republic - sightseeings, attractions, touristic spots, architecture, history, culture and cuisine. Prepare your trip together with OrangeSmile.com - find out the 'must see' things in Karlovy Vary, which places to visit, which excursions to take, where the breathtaking views are waiting for you. Planning your trip with this travel guide will help your to get the most out of Karlovy Vary in few days.