Sightseeing in Olomouc - what to see. Complete travel guide 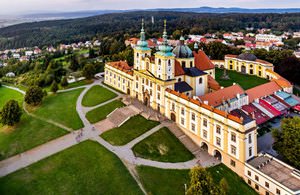 The capital of the Czech Republic is not the only place worth visiting in this beautiful country. There are many no less charming settlements that can amaze and enchant their guests. Without a doubt, Olomouc is one of these cities. This is a charming place, which has an area of only 103 square kilometers. Despite this, Olomouc is the sixth-largest city in the Czech Republic and home to a great number of ancient landmarks, many of which are true masterpieces of architecture. Experienced travelers say that Olomouc is much like Prague but without hordes of tourists and urban noise. Magnificent squares with Baroque fountains have become a calling card of the city. They have been decorating this region of the Czech Republic since the 18th century.
According to an old Renaissance period legend, Julius Caesar was the founder of Olomouc. He built a town on the site of the former Roman military camp. However, historians do not agree with this opinion and continue studying the subject. The settlement officially received the town status only in 1253. Over almost four centuries, Olomouc was the center of the province of Moravia. During the Thirty Years’ War, in 1640, the Swedish army captured the Czech city. The occupation period lasted eight years.
The Swedish plundered Olomouc and ruined many of its buildings. After this, it was decided to move the capital of Moravia to another city. In 1758, Frederick the Great made an attempt to capture the city. After a six-day-long siege, the intruder had to leave the territory. A close neighbor of Olomouc, Germany, always had a big influence on the cultural and social life of the city. The ties started disappearing only after World War I. However, the German community in Olomouc was big and influential. These people supported the Nazis during World War II. Copyright www.orangesmile.com
Undoubtedly, Olomouc is rich in attractions. One day is definitely not enough to see all landmarks of the Czech city, and each of these landmarks deserves a visit. The Town Hall building dominates the skyline of the main square. This is a fine example of Gothic-Renaissance architecture with Baroque elements. Nowadays, the city administration is open in the building, as well as a wedding hall, an art gallery, and several restaurants. The first town hall building dates back to the 14th century. That building was wooden and soon was destroyed by fire. After that, the government of Olomouc decided to build a stone town hall. 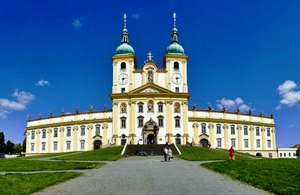 It took twenty-three years to finish the new town hall, which finally opened in 1443. The building was remade and reconstructed several times in the coming centuries. The Town Hall that we can see nowadays is a three-story building with an attractive gothic hall and the Chapel of St. Jerome with gorgeous figural motifs. The seventy-meter-tall tower with the astronomical clock is another notable part of the building. The clock was restored after World War II.
Do you like to visit the main cathedral in Olomouc? Saint Wenceslas' Cathedral is a must-visit place in the Czech city. It was built in 1140. Nowadays, the scared building is a famous Romanesque architectural landmark. Several towers, the height of which is roughly one hundred meters, decorate the popular shrine. The total length of the cathedral is almost eighty meters, and its width is roughly eighteen meters. Such significant size makes it possible to provide space for almost 5,000 prayers at the same time. 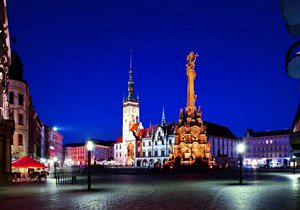 The sacred building changed its look more than once over the centuries. As each renovation brought new elements to the building, the solid-looking cathedral that we can see today is an interesting combination of Romanesque, Gothic, pseudo-Gothic, and Baroque architectural styles. The cathedral exhibits an important relic – a treasury box shaped like the Biblical Ark with four hundred diamonds inside.
Are you interested in aviation? In Olomouc, you can visit a museum that is open at the city’s aerodrome. This museum was established in 2009. The main exhibition of the venue is dedicated to the history of aviation in the Czech Republic and Czechoslovakia. Visitors can look at different models of aircraft. Moreover, they can see the workshop where all airplanes get a new life. 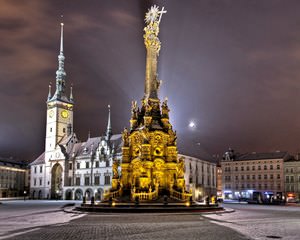 There is no trouble reaching Olomouc from any Czech city and even from many countries of the world. Krakow is situated approximately two hundred kilometers from Olomouc. Katowice and Prague also have a direct connection to the Czech city – daily trains are connecting the settlements. A train from Brno is, perhaps, the fastest way to reach Olomouc. The journey time is roughly two hours.
This guide to iconic landmarks and sights of Olomouc is protected by the copyright law. You can re-publish this content with mandatory attribution: direct and active hyperlink to www.orangesmile.com.

City tours, excursions and tickets in Olomouc and surroundings

Survived castles around Olomouc
♥   Castle 'Trenčín Castle' , 96.8 km from the center. On the map

National and city parks around Olomouc
♥   Landscape Park 'Śnieżnicki Park Krajobrazowy' , 76.1 km from the center. On the map

♥   Landscape Park 'Park Krajobrazowy Góry Opawskie' , 78.2 km from the center. On the map

♥   Landscape Park 'Strzelecki Park Krajobrazowy' , 116 km from the center. On the map

Search touristic sites on the map of Olomouc

Sightseeing in regions nearby Olomouc

Kromeriz
A giant castle that shares its name with the town remains one of the major landmarks of Kromeriz. Bishops and archbishops of Olomouc liked this building a lot, and so they made the majestic castle their residence. Kromeriz Castle was built in the 11th century. Initially, this was a gothic building, but the castle got traits typical for the Renaissance architecture later. The ... Open »
Brno
Brno is an ancient Czech city that is rich in different traditions and customs. This place is also known as the largest winery center of the country. Brno has a long history and sometimes this place is called “the city of wrong time”. Such name is connected with an interesting historical fact. The city was attacked by Swede in the 17th century. The inhabitants of Brno tried ... Open »
Ostrava
Travellers should also visit the New City Hall as one of the towers has been rebuilt into the city's largest observation area. The height of the tower estimates 86 meters, so it features a beautiful view of the city and all of its picturesque streets. Travellers with children will enjoy a tour to the new aquarium. You can also visit the city’s zoo, near which you will find ... Open »
Trencin
First mentions of this city date back to the 2nd century, when the Romans have created a fortified settlement Levkaristos on the place of the modern Trencin. In the beginning of the 11th century a fortress was built on the territory of the settlement. The owner of this place was a feudal lord Slovak Matos Chuck Trencin. The city got its name thanks to this fortress, which has ... Open »
Hradec Kralove
The kostel is still operating and hosting the divine service. Nowadays, this is a forty-meter-long building that is twenty meters wide. The height of the inner premises is thirty meters. The amazing pipe organ is the main attraction in the church. Installed in the 60s of the 18th century, the musical instrument still works flawlessly. The main altar with a painting of the ... Open »
Katowice
Classical music connoisseurs should visit Silesia Concert Hall that often conducts concerts of famous European artists. On Tuesdays here take place solo concerts and on Fridays you can attend the concerts of the Philharmonic Orchestra. International Club of Books and Printed Press has become a famous cultural center where often take place various events – music performances, ... Open »

All about Olomouc, Czech Republic - sightseeings, attractions, touristic spots, architecture, history, culture and cuisine. Prepare your trip together with OrangeSmile.com - find out the 'must see' things in Olomouc, which places to visit, which excursions to take, where the breathtaking views are waiting for you. Planning your trip with this travel guide will help your to get the most out of Olomouc in few days.