Preparing your trip to Ankara: advices & hints - things to do and to obey 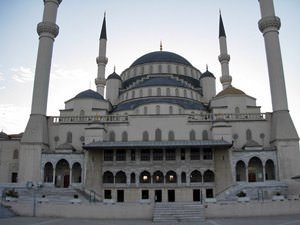 1. The tourists, who plan to devote much time to trips, are recommended to visit Ankara during the off-season period. It is too hot here in summer.
2. Hand-made items made of copper remain one of the most common gifts. You can find some really exclusive items among numerous pitchers, amulets, cups and other utensils. Some of them can please even experienced collectors.
3. Taking pictures of women is strictly forbidden, especially of the females which heads are covered with black scarves. Before you take a picture of a man, you should definitely ask him for permission.
4. You will need to take your shoes off at the entrance to a house or a mosque (in crowded mosques visitors are allowed to put shoes in a bag and take them in). When you plan to go sightseeing, it is better to choose accurate clothes. No bright, revealing or extravagant apparel is recommended. Tourists, who look too bright or provoking, may not be allowed to enter the territory of cultural attractions.
5. Alcohol can be consumed in specially designated places only. Drinking alcohol on the streets of the city is prohibited, and offenders of this rule may be obliged to pay a large fine. Copyright www.orangesmile.com
6. Leaving tips in the restaurants and cafes of the city is not common. If you really want to reward an obliging waiter, you are free to leave a tip of 10% of the total bill – such generosity will certainly be appreciated. You can also leave a small reward (not more than one dollar) to chambermaids and porters at hotels. Giving extra rewards to taxi drivers is not an accepted practice here.
7. Do not criticize the traditions and customs of the locals, this may offend them greatly. The indigenous population cherishes its past and is very sensitive to any criticism.
Guide to Ankara sightseeing - things to see and to visit
Ankara is not just a capital of Turkey, but also a popular resort city that attracts travellers by its unforgettable architectural sights, modern entertainment centers and well-developed …

Open
8. Do not forget to bargain on local markets and shops. Sometimes a seller can reduce the price of an item in half. It should be noted that sellers in street markets often intentionally increase the price of many goods. This is done hoping that newcomers do not know the rates on particular goods.
9. You can travel by buses in the city, but early in the morning and in the evening they can be very crowded. Of course, you can catch a taxi on any street of the city. It should be remembered that taxi rates are increased greatly after 20:00.
10. Guests are not recommended to drink tap water. It is not dangerous to health, but the local water is very chlorinated.

Preparing your trip to Ankara: advices & hints - things to do and to obey You can re-publish this content with mandatory attribution: direct and active hyperlink to www.orangesmile.com.
Ankara - guide chapters 1 2 3 4 5 6 7 8 9 10 11 12 13

8. Afternoon is the best time to make purchases. As a rule, it is very hot outside, so local shops do not have many visitors. In this case, tourists can expect to get a big discount and more attentive service. Bargaining is traditional in both shops and bazaars, so do not hesitate to ask for a discount because the initial price of all goods is intentionally increased.
9. When visiting a mosque, don’t forget to take off your shoes before the entrance. Tourists are better not to enter mosques during prayer times. Women are better to cover their legs with long skirts and put on a scarf on the head. Speaking loudly in a mosque is considered a sign of bad manners. Locals like respectful approach to their religion, but it is still not recommended to talk about religious themes with them.
10. It is better to refrain from drinking alcohol in public places, but this rule doesn’t apply to smoking. Turkish people are loyal to smoking, so it is possible to smoke virtually everywhere. By the way, smokers are better to stock up on cigarettes in their home country because tobacco is usually very expensive and not very quality in Turkey. It is allowed to import one block of cigarettes per person.
11. Medical services are paid in Turkey, and government hospitals are often not well developed. The majority of clinics and hospitals are private in Turkey. Tourists need to keep in mind that even a visit to the therapist will be paid. Consider getting medical insurance before a vacation to Turkey. … Open

Tips for the cities around Ankara

Konya
2. In addition to vehicles, bicycles are very popular in Konya. You can rent them at one of the many rental centers. No documents to rent a bicycle are necessary; you just leave the required amount of deposit. 3. Travelers, who expect to visit religious sites, have to remember several rules of conduct. You can’t enter the territory of the mosque in shoes; clothes have to ... Open »
Istanbul
2. When you enter a home or a mosque, you should definitely take your shoes off. You should be very careful while selecting clothes before visiting religious sites of Istanbul. Short skirts, shorts and open tops are not suitable for observations of the city. 3. You can drink alcohol in specially designated areas only. 4. Tips in local cafes and restaurants make up about ... Open »
Manavgat
2. The nearest sea beaches are located five kilometres from the city, they can be easily reached by public transport or by taxi. In Manavgat, there are several organized beaches on the banks of the river and on the territory of the reservoir. 3. Manavgat is not distinguished by the variety of large hotels with a large number of stars. It is dominated by budget hotels, ... Open »
Side
2. It’s most convenient to explore the city on foot; remote areas can be easily reached by taxi. It’s better to call a taxi by phone, as in this case the cost of services will be the lowest. 3. Locals are very hospitable, so in any case, don’t refuse to come for a visit or have a cup of tea. It’s necessary to thank the welcoming host for his hospitality. 4. Those ... Open »
Belek
2. Do not forget to remove your shoes at the entrance to a mosque or a private home. In large mosques people are allowed to put their shoes in a bag and take them in. When you visit a mosque you should also keep in mind that you can come round praying people only from the side of their backs. 3. Despite the fact that the local residents are very loyal to tourists, it is ... Open »
Alanya
2. Remember you can enter a mosque or a house only after you take off your shoes. If a house owner invites guests to have a cup of tea, guests should not refuse in any case – this will offend hospitable locals. 3. Do not wear too bright or revealing clothes when you go for a walk. The locals have quite strict rules concerning clothes and look. Taking a hotel card or a ... Open »

Travelling to Ankara - advices and tips. What should be provisioned in advance, the rules you might want to follow, and the things you better avoid doing in Ankara. We help you to make your trip smooth and easy, with no unexpected surprises.