Side
Countries navigation
Hotel search in Side

Preparing your trip to Side: advices & hints - things to do and to obey 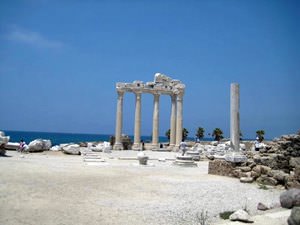 1. The vast majority of popular hotels are located in the central area of Side. Budget travelers should pay attention to hotels in a remote part of the city; in this case, the cost of accommodation can be significantly lower.
2. It’s most convenient to explore the city on foot; remote areas can be easily reached by taxi. It’s better to call a taxi by phone, as in this case the cost of services will be the lowest.
3. Locals are very hospitable, so in any case, don’t refuse to come for a visit or have a cup of tea. It’s necessary to thank the welcoming host for his hospitality.
4. Those who hope to bring a lot of pictures from holidays have to take several important features into account. First of all, don’t take pictures of local people without their prior consent. On the territory of some tour facilities photos and videos can be possible for an additional fee.
5. One of the most serious breaches of public order is drinking alcohol in public places and walking on the street while being drunk. Violators face a serious penalty, so you have to enjoy your favorite drinks only in restaurants and bars. Copyright www.orangesmile.com
6. In restaurants and cafes it is customary to leave a tip, it is usually 7-10% of the total order. Similar tip is expected by taxi drivers; you can leave a tip of 0.5-1 USD for a hotel maid, depending on the hotel.
7. It’s better to go shopping with plenty of bills of small face value, so it will be easier to pay. It is certainly worth to bargain at the market and in private shops, because it certainly will reduce the price.
Guide to Side sightseeing - things to see and to visit
Side is a city with rich history. In the past this place was a sanctuary for all sorts of criminals, misfits, pirates and runaway slaves. This is also the former largest slave market in Asia …

Open
8. Vacationers are advised to buy only purified bottled water to drink; it is sold in all supermarkets and grocery stores. This will make acclimatization easier and will help to protect from feeling bad.
9. Buying goods in street markets one should be very careful, because not all products are of high quality. For expensive clothes, perfumes and jewelry it’s better to go to large shopping centers.

Preparing your trip to Side: advices & hints - things to do and to obey You can re-publish this content with mandatory attribution: direct and active hyperlink to www.orangesmile.com.
Side - guide chapters 1 2 3 4 5

What to visit being in Side - unique sights 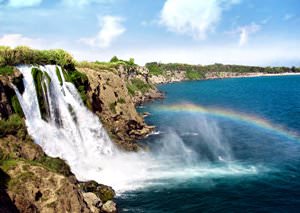 Distance from Side center - 62.8 km.
Those who wish can go down into the cave, which is securely hidden behind the waterfall and appreciate its beauty from the back side as well. In the direct vicinity of the attraction there is an incredibly beautiful park with seating areas specially equipped for relaxation, inviting you for a picnic. Those who prefer to take their ease in an atmosphere of an increased comfort have a chance to relax in one of the nearby restaurants and enjoy panoramic views of the waterfall tasting specialties at the same time. Romantic natures can admire the waterfall during a sea voyage. It offers a great view from the shore. … Read further

Distance from Side center - 27.3 km.
The Emperor promised to give his daughter in marriage to the one who would build the most necessary building for the city. Thirty years it took one architect to build an aqueduct, and exactly the same to the second to build a wonderful amphitheater. The king was so impressed with their work that he could not choose his future son-in-law, and promised to do justice. He decided to cut the daughter in half. Then the architect Zenon, who built the amphitheater, decided to abandon his "half" and saved the life of the aged 30-year-old beauty. With that he immortalized his name in history. … Read further

City tours, excursions and tickets in Side and surroundings

Tips for the cities around Side

Manavgat
3. Manavgat is not distinguished by the variety of large hotels with a large number of stars. It is dominated by budget hotels, many of them also offer customers the "all-inclusive" system. 4. The most attractive hotels and restaurants for tourists are located on the banks of the river. This area remains the most interesting from a tourist point of view, the main part of ... Open »
Belek
3. Despite the fact that the local residents are very loyal to tourists, it is not recommended to appear on the streets of the city wearing frank and colorful costumes. Such clothes as short skirts, shorts, shirts without sleeves, and tight clothes will be definitely irrelevant when you visit various religious sites and public institutions of Belek. 4. The locals are ... Open »
Alanya
3. Do not wear too bright or revealing clothes when you go for a walk. The locals have quite strict rules concerning clothes and look. Taking a hotel card or a copy of identity documents with you is also a good idea. 4. You cannot drink alcohol on the streets of the city. The violators of the order will have to pay a large fine. Many restaurants and bars can prohibit ... Open »
Antalya
3. Entering houses and mosques can be made only after you remove your shoes. Make sure you are quiet in the mosque. Do not forget to pay your attention to your outfit before you plan to visit a mosque. Tourists wearing revealing or bright clothes may be simply rejected to enter the territory of many places of interest. 4. Drinking alcoholic beverages on the streets of ... Open »
Kemer
3. Taxi remains one of the most popular forms of transport for travelers. The price of its services is quite acceptable. Recognizing a taxi in the streets of the city is really simple. These cars are painted in yellow. It's worth noting that in the evening the taxis charge a special night rate, which is usually one and a half times higher than the day one. This night rate is ... Open »
Konya
3. Travelers, who expect to visit religious sites, have to remember several rules of conduct. You can’t enter the territory of the mosque in shoes; clothes have to cover your arms and legs, and women should also cover the head with a headscarf. Too bright or too low-necked attire can become a reason to refuse in passage into mosque. 4. On the territory of some tour ... Open »

Travelling to Side - advices and tips. What should be provisioned in advance, the rules you might want to follow, and the things you better avoid doing in Side. We help you to make your trip smooth and easy, with no unexpected surprises.