Video of flights over top monuments of Amsterdam in HD format.
Use 'Full Screen' mode.
Of course, in order to feel the magnificent atmosphere of Amsterdam, one needs to visit this place, walk on charming streets of the historical center, visit local cafes, and enjoy the look of the local landmarks - Oude Kerk, Montelbaanstoren, Waag, Magna Plaza, Noorderkerk and many others. In order to make your virtual tour to the city more interactive, we offer an unusual opportunity to fly over every notable landmark of Amsterdam. Simply start the video, and use the full-screen mode. Each landmark comes with extra information, containing a collection of interesting facts and a photo gallery. Let’s go! 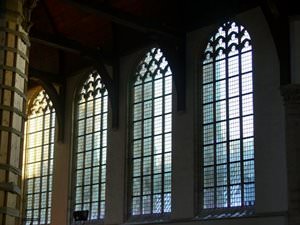 Facts:
» The 800-year-old Gothic church of Oude Kerk is the oldest building in Amsterdam and the old parish church founded approximately in 1306.
» In the 17th century the church became a place of marriage. The shrine was also used as the city archives.
» The remains of the famous Dutch composer, Jan Pieterszoon Sweelinck, which has long been the young organist at Oude Kerk, lie there.
» Rembrandt was a frequent visitor of the church, and all of his children were baptized in the Oude Kerk. A small exhibition of his works has survived in the shrine.
» Floor of the church consists entirely of gravestones. The fact is that the church was built on the site of the cemetery. Locals are still buried at the site within the boundaries of the shrine. 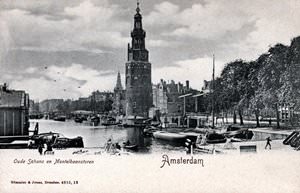 Facts:
» Montelbaanstoren is one of the defensive towers of Amsterdam, built in 1512.
» The tower is quite an interesting structure, as its massive bottom is crowned with a white colonnade with a clock.
» Due that clock people unsightly called the tower Silly Jacob, because the clock on the tower showed the wrong time.
» The tower entered the history of world art, as it can be seen at View of the Montelbaanstoren by Rembrandt. 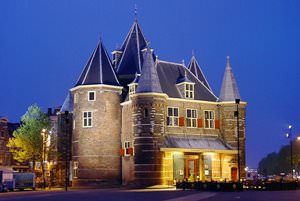 Facts:
» Waag is the oldest secular building in Amsterdam constructed in 1488 as the gate of the city wall.
» In the 17th century weighing service (hence the name of the construction) was started in the building; the main task of it was to weigh the goods for the market.
» At that time a few guilds - blacksmiths, painters, masons and surgeons – were situated at the upper floors of the building.
» Then the building was used as a fire station, and later as the city archive of Amsterdam.
» Most of the 20th century Waag was working as a museum. Currently, the lower floors of the building are occupied with cafes and restaurants, and the organization working in the field of media technologies occupies the top floor. 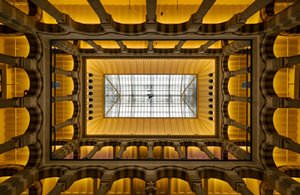 Facts:
» The Magna Plaza is the huge shopping center located in the heart of Amsterdam.
» In 1992, the municipality had decided to add a building to the list of the ten most important monuments of Amsterdam.
» In fact, the building occupied by the shopping center originally served as the main post office.
» The building was designed in the neo-Gothic style in the 19th century by the famous architect Cornelius Hendrik Peters.
» You can find all the well-known global fashion brands, as well as two amazing interior design shop, several souvenir departments, a shop with wooden toys and a shop for skateboarders on three floors of the Magna Plaza.
» The shopping center also has a cozy restaurant and a coffee bar. 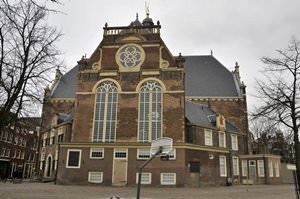 Facts:
» Norderkerk or the Northen Church almost hasn’t changed over time. It was built in 1623 for the poor.
» The church is designed in form of the equilateral Greek cross, which was an innovation for its time.
» At the entrance to the church there is the sculpture consisting of three connected pieces, which is dedicated to popular clamor. There is the inscription on it, telling ‘The Power - in solidarity.’
» In 1627 the square around Nordekerk has become a place for selling pans, pots and used clothing. The tradition continues even these days; currently there is a flea market there. 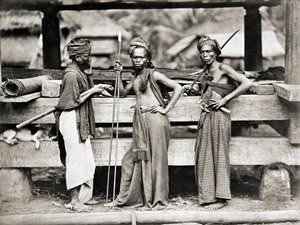 Facts:
» The Tropenmuseum is the major ethnographic museum in Amsterdam.
» The museum is one of the leading venues in Europe, which is famous for its rich collections.
» Eight permanent and a series of temporary exhibitions, including collection of both modern and traditional fine art and collection of photographs, are represented in the museum.
» There you can see life in tropical and subtropical regions of the world: India, Southeast Asia and South America. The museum thoroughly recreates flavor of these places, so you can see the huts of the natives, bazaars and more; even the local smells and sounds are reproduced here.
» The museum has its own theater, where concerts of Eastern music, theater and dance performances are held every evening. 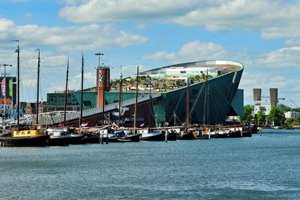 Facts:
» The Nemo Center is the largest science museum in the Netherlands. It attracts more than 500,000 visitors annually, making it the fifth most visited museum in the country.
» The construction of this large research center resembles a huge green ship in five floors. Thanks to the architect's plan, inside the museum you can see the vent pipes, steel slabs and other functional parts of the building.
» On the first floor you can enjoy half-hour show representing a long chain reaction, and the second floor houses the ball factory.
» There is the scientific laboratory on the third floor, where people can conduct scientific experiments; there is a section dedicated to the human brain on the fourth floor. Here you can explore the memory, the brain and senses.
» The roof of the museum is looking over the old town. This is the only place in Amsterdam, which offers such a great view.

CONTINUE - PART II »»
This guide to architectural sightseeing in Amsterdam is protected by the copyright law. You can re-publish this content with mandatory attribution: direct and active hyperlink to www.orangesmile.com.
Amsterdam - guide chapters 1 2 3 4 5 6 7 8 9 10 11 12 13 14 15 16 17

Build your walking routes in Amsterdam on the landmark map

Architectural landmarks in the regions around Amsterdam

The Hague
The quadrangle building is built of granite, light quarry sandstone, and red brick. There is a courtyard with a fountain bowl created in Copenhagen. There is also a garden designed like English landscapes. In the Peace Palace, legal proceedings and arbitration court hearings take place. This place is an indisputable institution of justice incorruptibility. Many countries contributed to the construction. When the First ... Open »
Rotterdam
The Euromast is a skyscraper in the form of the mast. The City Hall declared the competition of the construction of the extraordinary object. The Dutch architect won it. The Euromast was built in 1960 in conjunction with the tenth international Floriade exhibition. The Euromast is 9 m. The walls are about 30 cm thick. Its foundation is a solid block that weighs 1 900 tons. It makes such a thin construction more stable. There are ... Open »
Gent
There was a cloister at the site of the present House of God in the first half of the 10th century. You can see its wooden remains in the cave. Sint Baafskathedraal has not changed since the 14th century. The construction was completed in 1569. It seems that the building is cone, which is the feature of the Gothic style. The 3.5-meter altar is considered as a relic. It was created in the Middle Ages. When its shutters are opened, ... Open »
Brugge
The Church of Our Lady is a construction that features the combination of Gothic and Roman styles. The construction lasted over 2 years and was completed in the 13th century. In the spacious church with a 122-meter tower, the only sculpture of Michelangelo, “The Virgin Mary with the Baby”, is kept. Some windows of the church have the shape of a Reuleaux triangle. Such windows are quite rare. The church is famous for the fact that the ... Open »
Brussels
The Brussels Town Hall is one of the most beautiful buildings in the city, which is the symbol of Brussels. The 5-meter statue of the Archangel Michael, the patron saint of Brussels, throwing devil is installed at the 96-meter Gothic Tower. The oldest part of the town hall was built in 1420, and the other part of the building was completed a little later (in 1450). Facade of the Hall is decorated with numerous statues of nobles, saints, and ... Open »
OrangeSmile.com - online travel reservation expert providing reliable car rental and hotel booking services. We feature more than 25.000 destinations with 12.000 rental offices and 200.000 hotels worldwide.
Secure Server