Sightseeing in Hilversum - what to see. Complete travel guide 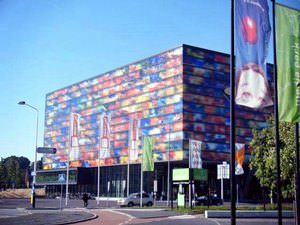 The town named Hilversum is located in the heathery Het Gooi hills on the east of North Holland. This is one of the twelve provinces of the Netherlands. This town is also a radio and a television broadcasting center. Here is headquartered International Netherlands Radio. The town is situated on the railway line that connects Amsterdam with Schiphol Airport and further, with Amersfoort. There are three railway platforms on the territory of the town - Hilversum Centraal, Hilversum Noord, and Hilversum Sportpark. The intersection of central highways is also located nearby.
You will also find a port (lake) and an airport southwest to Hilversum. Calm rhythm of life of this place and its original nature traditionally attract tourists. Businesses are also not rare visitors of the town. To their service are five cozy hotels, including two four-star and three three-star ones. Amazing comfort and excellent service, as well as presence of landscaped area with golf courses, tennis courts, and more will make your stay in this place truly unforgettable. After resting in Hilversum, you will surely understand how nice a quiet holiday in Northern Europe can be…
In the city, there are a lot of interesting historical constructions. The buildings of the old railway stations deserve a special attention. The main city station is called Barn. It was founded in 1874. Since its founding, the station has been considered to be special. Already at the end of the 19th century, it was regularly used by the representatives of the royal family. Not far from the station is one of the royal palaces located. So, there is a special royal waiting room equipped for privileged individuals. The building of the old station has an immense architectural value. Copyright www.orangesmile.com
Another beautiful and impressive construction is the Soest Station located in the immediate surroundings of the city. This railway station was built in 1898. Since its construction, the station has remained almost unchangeable. Its visitors can admire the fascinating building with a tiled roof of brick. The station has managed to partially preserve its original interior. Near the station, there is a beautiful old park. It is interesting to walk here in any season. 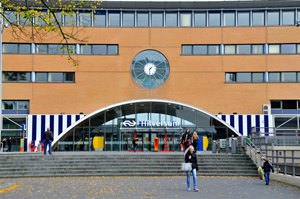 The unique attraction of the city is the museum devoted to the television, The Netherlands Institute for Sound and Vision. The museum occupies a fascinating modern building, the facade of which is tiled with glass panels and resembles a huge display from afar. In this building, there is an archive of TV pieces and audio recordings. The tourists are attracted by the original themed museum. It presents its guests the specific features of the television and other media development. In the museum, there are a lot of interesting interactive exhibits.
Nature admirers have an opportunity to visit the park called Goois Natuurreservaat. It is a favorite recreation place of tourists and local residents. In the park, there are a lot of beautiful trees. There are also special roads for hiking and riding bikes. This park is really big. The beautiful river runs in its territory. Some of its areas are used for grazing cows. 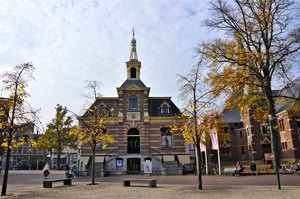 You can diversify your vacation by visiting the interesting city museum called the Museum Hilversum. It occupies a fascinating historic building and houses different antique items. Here, you can see collections of old photos and pieces of art. Women will be certainly impressed by the collection of old handbags.
This guide to iconic landmarks and sights of Hilversum is protected by the copyright law. You can re-publish this content with mandatory attribution: direct and active hyperlink to www.orangesmile.com.

City tours, excursions and tickets in Hilversum and surroundings

Survived castles around Hilversum
♥   Castle 'Drakensteyn Castle' , 6.7 km from the center. On the map

National and city parks around Hilversum
♥   National Park 'Utrechtse Heuvelrug' , 24.4 km from the center. On the map

Art galleries in Hilversum and around
♥   Art museum 'Museum Catharijneconvent' Utrecht, 16.7 km from the center. On the map

♥   Art museum 'Hermitage Amsterdam' Amsterdam, 24.1 km from the center. On the map

♥   Art museum 'Rijksmuseum Amsterdam' Amsterdam, 24.7 km from the center. On the map

Sights around Hilversum from our guide 'Extreme places on Earth'

Distance from Hilversum center - 24.8 km.
Some museum rooms are dedicated to breeding the exhibits - here the various hemp varieties cultivated by the museum staff grow. Since 2003, the large and constantly updated collection of exhibits has been located in the new building, not far from Dam Square. Today, the museum's guests can see more than 6,000 unique exhibits. Although the theme of the museum is quite contradictory and controversial, the numerous tourists have been receiving it for several years. It must be borne in mind that the children under 13 years of age can visit the museum of marijuana free of charge, but only accompanied by adults. … Read further

Distance from Hilversum center - 22.3 km.
The color of the bridge was chosen by chance and has no particular symbolic character. Within a few years 'Python' Bridge became a must for many excursion programs through Amsterdam and attracts not only the curious tourists, but also the construction workers from different countries. Like the other bridges of Holland, 'Python' is very solid and secure. Only high-strength steel was used during the construction of the bridge … Read further

Search touristic sites on the map of Hilversum

Sightseeing in regions nearby Hilversum

Almere-Stad
This modern Dutch city is located not far away from Amsterdam. There are four main regions in Almere – Almere Stad and Almere Haven, which were built yet in the 90s; Almere Buiten Zuid that was built 10 years later, and Almere Buiten Nord, which is currently under construction. The city is full of new buildings and a huge part of them is dedicated to hotels and tourist ... Open »
Amersfoort
A wonderful ancient city, Amersfoort is full of medieval era sights that are still in great condition. Its territory attracted first citizens yet in the 10th century, but it was only the 13th century when this place got the status of a city and the name Amersfoort. Today only ruins of the ancient fortress wall remind of the old city. The length of this wall estimated 1.5 km ... Open »
Utrecht
This city is located in the central part of the country. This is a major university center and a popular resort of the Netherlands. First mentions of the city belong to the first century. At that time a large fortress was built by the Romans on the place of the modern city. For many years Utrecht has been an important point of defense. In the end of the 7th century it became a ... Open »
Amsterdam
Amsterdam is not a kind of city that is full of various places of interest, which are well known all over the world. However, the city itself is actually one huge place of interest - its atmosphere, its international spirit, its tolerance and, of course, wonderful channels have made Amsterdam an outstanding city. If you are going to enjoy sightseeing there, we strongly advise ... Open »
Haarlem
Haarlem is a city located in the Netherlands, on the west of the country 20 kilometers away from Amsterdam. This is the capital of Northern Holland. The population of Haarlem estimates 149 thousand of people. Haarlem is famous primarily by its flower growing (especially worldwide famous tulips). As the city is located in the center of the industrial region of Holland, besides ... Open »
Gouda
Currently, the Sint Janskerk is a basilica, the shape of which is reminiscent of a cross. Inside the church, visitors can still see an old and unusual musical instrument, carillon. It was installed here in the 17th century. Besides that, take a look at the gorgeous stained-glass windows that decorate the Sint Janskerk. These stained-glass windows were made in the 16th ... Open »

All about Hilversum, Netherlands - sightseeings, attractions, touristic spots, architecture, history, culture and cuisine. Prepare your trip together with OrangeSmile.com - find out the 'must see' things in Hilversum, which places to visit, which excursions to take, where the breathtaking views are waiting for you. Planning your trip with this travel guide will help your to get the most out of Hilversum in few days.