Sightseeing in Eindhoven - what to see. Complete travel guide 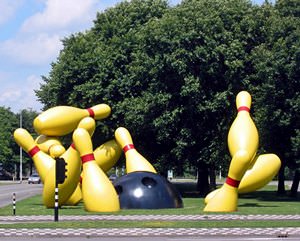 Sports fans will surely associate Eindhoven with a famous football club PSV. Those, who are interested in the history of technology, will call this town as a hometown of DAF. The industrial prosperity of the town is mostly combined with the development of production cars. The first production hall of van Doorne Brothers Company has been now turned into Museum of DAF.
Advices to travellers: what you should know while being in Eindhoven
1. Holidaymakers should take into account that almost the entire central area of ​​the city is pedestrian. It’s very easy and fun to explore it on foot or by bicycle; everywhere in …

Open
The town has not yet become the center of international tourism, but those visitors, who have been lucky enough to spend at least few memorable days here, will keep the memory of this amazing corner of Europe in their hearts. It feels like time has no power here over the calm lifestyle of the inhabitants of this northern province. Quiet walks through the streets of the town and its beautiful surroundings will not cause much damage to the family budget. Only here you can try truly amazing beer from Eindhoven Monastery. Visitors of Eindhoven will be surely offered to taste beer soup or beer liquor.
Just like any self-respecting town of Europe, Eindhoven has its own museums. Evoluon Museum (technical achievement) was opened thanks to Philips Concern, which had been founded here. Stedelijk van Abbe Museum Art Museum offers the exhibition, which can make any big city museum seriously envy. Copyright www.orangesmile.com
Cuisine of Eindhoven for gourmet with top restaurants and cafe
Tourists could find the most unusual dining places, including attractive restaurants of local cuisine in Eindhoven. In the heart of the city there is the exotic Popocatepetl restaurant …

Open
In the city, there is a very interesting religious monument, St. Catherine Church. The first church at its site was built in the 13th century. Already at that time, the citizens considered St. Catherine their main patron. Over the years of its existence, the temple had been repeatedly ruined during different military conflicts. It was last rebuilt at the beginning of the 16th century. The temple gained its present design after the reconstruction of the second half of the 19th century. Today, it is a spectacular monument in the neo-Gothic style. The main architectural feature of the church is two magnificent towers that are 73 m high.

In 1971, a new cultural center, the concert hall called Effenaar, was opened in the city. Since its opening, it has been one of the largest concert stages in the Netherlands. In the center, such bands, as Sex Pistols, Fugazi, Red Hot Chili Peppers and R.E.M. performed. There are two halls, one of which accommodates 1 500 people and the other  350 people.
Authentic traditions, festivals and lifestyle of Eindhoven inhabitants
Eindhoven is informally called the City of Light; this name is due to the important historical event which has radically changed the fate of the place. In 1891, Anton and Gerard Philips have …

Open
In the surroundings of Eindhoven, there is an interesting ethnographic outdoor museum. Its visitors can learn a lot of interesting things about the history of the province. The museum is located in the beautiful natural area. It houses the unique collection of historical and ethnographic exhibits, pieces of art, and other unusual antique items. 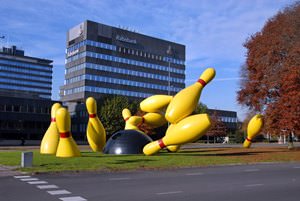 Another interesting monument of the 19th century is the Augustinian Church that has incomparable architectural features. The important element of the construction is its high hexagonal tower, on the top of which the sculpture of Christ is installed. This sculpture is 4 m high and weighs almost 800 kg. The main value of the old church is its fascinating stained glass windows that have been preserved since the founding.
Excursion over cultural sights of Eindhoven - 'must visit' points of interest
The picturesque southern city of Eindhoven features harmonious combination of unique historical atmosphere and modern style. Age of the city is more than seven hundred years; there are lots …

Open
The biggest religious construction in the city is the Church of St. George. It is located far from lively central streets, so not all tourists know about it. The tower of the old church is about 90 m high. You can see it from many surrounding streets. The main value of the temple is an old organ installed in the 19th century. The magnificent church of St. George is also a vivid example of neo-Gothic architecture.

This guide to iconic landmarks and sights of Eindhoven is protected by the copyright law. You can re-publish this content with mandatory attribution: direct and active hyperlink to www.orangesmile.com.
Eindhoven - guide chapters 1 2 3 4 5 6

Shopping streets in Eindhoven
♥   Shopping area ' Demer' Eindhoven, 1.4 km from the center. On the map

♥   Shopping area ' Rechtestraat' Eindhoven, 1.5 km from the center. On the map

Sights around Eindhoven from our guide 'Extreme places on Earth' 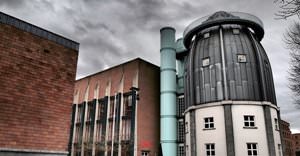 Distance from Eindhoven center - 69.5 km.
The spectacular museum building has become a popular landmark for the residents of Maastricht and its guests. The museum is located in a very picturesque area, on the banks of the Meuse River. A small park area is located in front of it. The museum building is located on the same site today, where the building of the Bonnefantin Monastery was located in the 18th century. This monastery was known for taking care of orphaned children. The monastery has fallen into disrepair over the years. Its building was destroyed. A beautiful monument of modern architecture is located in its place today. … Read further

Distance from Eindhoven center - 64 km.
The Queen’s Day is an occasion to trade all possible things. Very often in the street markets you can buy unique antiques and works of art. The most extensive festivities are traditionally held in Amsterdam. As the city centre is overcrowded, no transport is possible there. Thousands of visitors have to walk. Plenty of interesting decorations and orange clothing, exciting street performances and markets that stretch for several kilometres are really worth visiting and enjoying. … Read further

Search touristic sites on the map of Eindhoven

Sightseeing in regions nearby Eindhoven

Tilburg
Old Cavalry Barracks are considered one of the main attractions of this place. The barracks were built in the middle of the 19th century. Another magnificent palace is located just nearby. Nowadays here works the local municipality. Don’t forget to visit Museum of Textile, Brabant Museum of Nature, and Museum of Modern Art. During a year several major events take place in ... Open »
Den Bosch
There are not so many places of interest in Den Bosch, but this town is famous for fantastic pictures of Hieronimus Van Aeken (known by his pseudonym Bosch) that are exhibited in one of the local museums. There is also a beautiful St John Cathedral, which inner decorations and drafts of stained-glass windows were created by Bosch. The architecture of St. John Cathedral ... Open »
Waalwijk
Fans of contemporary art and those who prefer non-standard entertainment should not ignore Atelier Winterdijk 30b Gallery. It is a center of contemporary art, which often hosts interesting exhibitions and thematic events, as well as theatrical performances. Here you can often watch an interesting movie or even arrange an enchanting private party. If these attractions ... Open »
Limburg
The province has well-developed tourist infrastructure; travelers are offered a variety of sightseeing tours, most of which take place in the metropolitan area. Perhaps the oldest historical landmark of Maastricht is the bridge over the river Maas built in the late 13th century. Nearby is the old courthouse and the city hall in Baroque style; these buildings were built at the ... Open »
Roermond
In this Limburgish provincial city, tourists can visit the Church of the Assumption of the Virgin Mary or simply Munsterkerk. This church is a truly unique building because this is the only surviving Late Romanesque church in the Netherlands. It was built in the 13th century in the territory of the Cistercian abbey. The land belonged to Gerard III. He was the founder of the ... Open »
Nijmegen
Valkhof Park is one more notable attraction of Nijmegen. Initially, there was a Roman military camp on the site of the modern park. Later, Charlemagne’s castle stood here. As it is not hard to guess, both the formations haven’t survived to this day. The old chapel dedicated to Saint Nicolas is the only historic building in the park. This old stone chapel also had to ... Open »

All about Eindhoven, Netherlands - sightseeings, attractions, touristic spots, architecture, history, culture and cuisine. Prepare your trip together with OrangeSmile.com - find out the 'must see' things in Eindhoven, which places to visit, which excursions to take, where the breathtaking views are waiting for you. Planning your trip with this travel guide will help your to get the most out of Eindhoven in few days.